What I Learned from a Bouquet of Daylilies that lived for Decades. 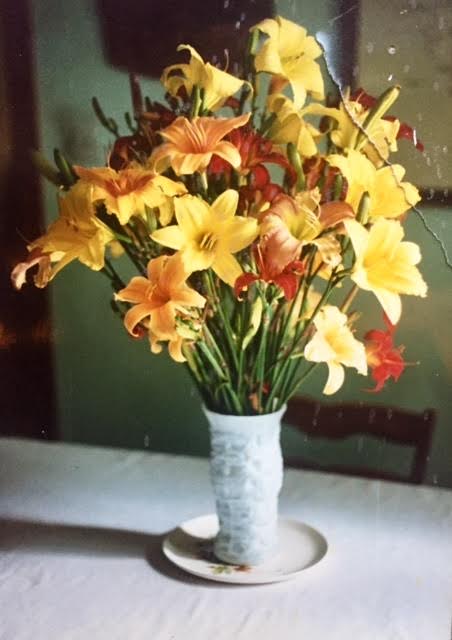 “Every flower is a soul blossoming in nature.” ~ Gerard De Nerval

.
It is that brief time of year when daylilies bloom.

Each flower only blossoms for a day, which is why they are called “day” lilies.

Over 30 years ago, my father, a minister, sent me a picture (above) of a bouquet of daylilies from his garden. Daylilies were his favorite flower. He raised them and even created new strains—naming one after my mother.

At the time he sent the picture, I was finishing up my MBA in Finance degree. I was also healing from a failed romance, and I was broke.

I had told my father about these challenges in a phone call days before. And instead of sending the money I hoped for, he sent this picture.

I was so disappointed, I didn’t even acknowledge the picture.

Later, on a phone call, he asked, “Did you get the picture of daylilies I sent?”

“Yes…it was pretty,” I admitted.

“You know, daylilies only bloom for the day.” I didn’t respond, so he continued, “They are really beautiful though, don’t you think?”

“Wouldn’t it be great if we could make an impact like that, even for a day?”

I remember the conversation so clearly, because instead of giving me what I wanted, he gave me what I needed. I wanted money—but he gave me life-altering advice. However, it would take me decades to appreciate it.

Less than a year later, my father was dead. He died of a massive stroke while caring for tomato seedlings. It seemed somewhat appropriate that he passed away while nurturing new life.

When my father died, over 200 people came to his viewing—many we didn’t even know. Some of the attendees shared stories about how he helped them with a kind word or action. It was overwhelming, sad, and amazing at the same time.

When my widowed mother moved from the house she and my father had lived in, I took some of the daylily plants from their garden and planted them in mine.

Each home we moved into since, I’ve planted the heirs of my father’s daylilies in the garden. I would wait for them to bloom every summer and think about my father’s advice—to make the most of my brief life and be of benefit to the world. Seems like simple advice, but it was hard to implement.

As my mid-century mark approached, I knew my “lily day” was more than half over, and I still hadn’t bloomed. I was running out of time and needed to make some changes.

So, I found three ways to internalize his daylily advice:

1. Commit to a regular yoga practice or some other mindful practice. Yoga classes involve breathing, yoga postures, and a restful meditation to complete the practice. The experience allows students to slow down and deregulate their nervous system, so they can find peace and be more mindful. Other mindful practices I have found helpful include walking in nature, journaling, or pursuing something creative like coloring.

2. Find a way to help others. How can you help others by doing what you like to do and supporting what you love? I love the two dogs I rescued from a local adoption agency, and I spend about an hour a week calling the references of potential adopters. It helps needy dogs and people find each other, which is very rewarding.

3. Continue to learn and invest in yourself. No matter one’s age, there is still a lot to learn. What have you always wanted to study, but never thought you had the time? I had always put off yoga teacher training, so I decided to pursue it—and now that I am a teacher, I am getting my yoga therapy certification. This has not only brought me more peace, joy, and a community of like-minded folks, but it’s allowed me to share yoga and other wisdom philosophies with others—some of which I learned from my father.

So, this year, as the daylilies bloom, I look at them and hope my father is pleased that I finally took his daylily advice. It took me over 30 years, but I have finally bloomed.

How might the brief life and beauty of the daylily inspire you to make the most of each moment and be of benefit to the world?

“Speak to your children as if they are the wisest, kindest, most beautiful, and magical humans on earth, for what they believe is what they will become.” ~ Brooke Hampton