Baby Kitties! And the Wisdom they Brought Me. 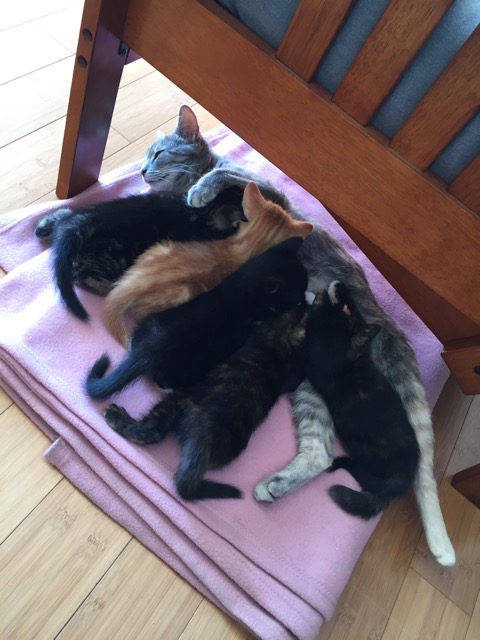 Eight weeks ago, almost at this exact hour, I walked into the barn to feed the animals and to check on the barn cat, who we knew was expecting kittens at any moment.

I found her cozied up in the box we had set up for her, licking two kittens she had clearly just given birth to.

I sat with her for the next couple of hours. She labored and meowed and miraculously birthed three more kittens. She looked at me directly in the eye, and I sat there silently, just being present with her.

I marveled at how her body moved them through her, how she wore a look of utter concentration, how she cleaned them, and how they made their way to a teat and suckled.

I finally left them, all five kittens curled up with mama cat, who was purring away contently with her brood latched on.

In the days and weeks that followed, I spent many hours with them. How incredible nature is! They nursed, and eventually learned to meow and purr. Their eyes slowly opened. They wobbled, then walked, then ran, then pounced. They played hard, and slept deeply. They curled up with each other in little boxes, smushed together for warmth and comfort.

They all grew at different rates, and each had its own distinct personality.

I marveled at them everyday. Their drive to live and grow and learn was incredible.

And I watched mama cat evolve and adapt to her growing brood, calling to them with a special meow when she wanted them near, holding down squirming toddlers to give them a cleaning, nursing them only two at a time as they grew almost as big as she was.

At a couple of days shy of eight weeks old, they had finally learned to climb out of the horse stall they were living in, so we moved them into the dog pen, which had access to the outside. They were so happy there! They romped and climbed the rafters, chased bugs in the grass, and curled up all together for post-nursing naps.

We brought them outside one sunny day and let them feel the grass and the sunshine. Mama cat brought them a mouse she had hunted, and let her young ones explore it.

That night, I went out to visit them as the sun was setting, and they were all either happily playing or napping, content in their new digs.

Then, the world seemed to turn upside down.

The next morning, there were only two kittens in the pen. Mama cat was meowing and searching. We called and called, walking around endlessly—but no kittens. How could this be? These little beings that I had watched enter the world, grow, and thrive for the last eight weeks, were they just gone?

All day, we humans and mama cat searched. I sat with the two remaining kittens and cried and cried, stroking mama cat as she lay on my lap.

Nature is amazing, but sometimes, she is also cruel.

Some animal had surely stolen these three little ones for dinner; survival of the fittest, I suppose.

But we humans had failed to protect these still dependent and vulnerable beings. How could we have been so dumb? Why hadn’t we moved them back to the barn for the night? We asked ourselves these questions over and over again, feeling guilty, and all the while, still in shock: the kittens were gone, most likely dead.

I kept seeing their little faces, feeling their warmth and softness, remembering their characters.

It so happened that I had been re-reading The Four Desires by Rod Stryker over these last weeks, with a commitment to review and revise my goals and purpose for the next year. The last two days in particular, I had been reading about how nature/God/whatever-you-call-it gives us all an undeniable force to live and to be.

However, as humans, this drive is sometimes numbed, or we become distracted. What we should be doing is figuring out what our purpose, or dharma is, and then living life as authentically as possible, to let our purpose unfold as it should.

It is then that life becomes magical.

This purpose had been so clear in the kittens. It was such a gift to see nature working in this way—simple, unfettered.

The timing of having these kittens in my life had been a gift. Recently, I had been particularly struck by the force of missing my husband, who died over 15 years ago. This renewed sadness had most likely overcome me because our daughter had just graduated from university, life passing as it does.

I had felt his absence more than I had in a long time. But by spending time with these amazing little beings, I had been soothed and reminded that little beings grow and evolve, that life is fleeting, that we are here but for a moment in the big scheme of things.

These kittens were here but for a micro-blip of time, yet they touched me so deeply. Now especially, I am happy that I did take all that time to sit and play with them, reveling in the magic of the moment rather than rushing to do something on my list.

Here are some simple reminders these kittens brought to me:

>> Be present in the moment. Savor it, absorb it. That moment will never repeat itself.

>> Love deeply. Those kittens, or that person, will not be there forever. Spend time with them, show them your love and affection. Don’t hold back.

>> Let yourself grieve when you do lose someone you love. Feel the emotions, don’t run away. You will eventually move through them and slowly heal.

>> Take the time to be with yourself, in an environment that is healing and positive. Spend time there figuring out what your purpose is. This is not wasted time.

>> While we are here on this earth, recognize the beauty and magic of nature and life. Live in a way such that your life is as miraculous as it can and should be.

The morning after I wrote this, 48 hours after the kittens had disappeared, they came back!

We guess that they followed their mama cat out at night and either got frightened or lost. The morning they returned, two of them were already snuggled up with mama, and when we followed the meowing we were hearing, we found the third one outside the barn trying to get in.

That whole day, the kittens and their mama stayed close together, and they nursed a lot. We kept them all securely in the barn for all the nights afterward, until they went to their respective homes. The last little one remaining was a female gray tabby, the one who had been the last to return after the scare.

She now lives with me in my house. 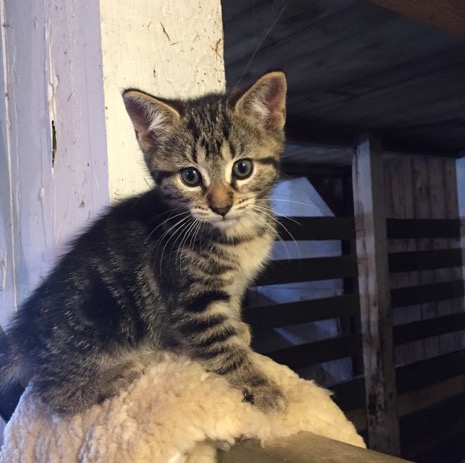 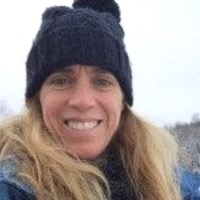