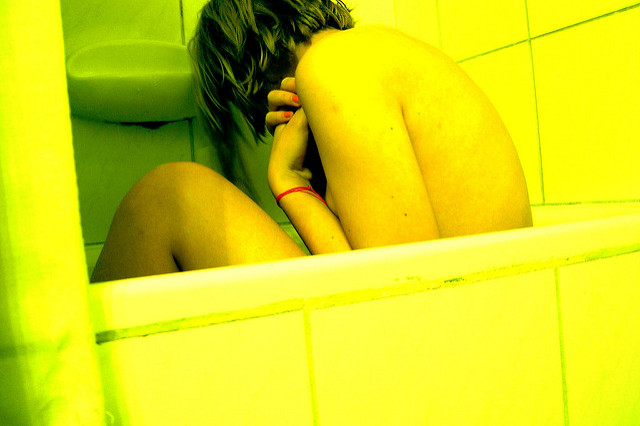 I was pinned on the ground, my back raw from rubbing against the old deck.

He was mounted on top of me, his body strong and dense, his face painted with desire.

“Stop!” I told him as I swatted him away from my groin. “Stop!” I said again as he pushed his way into me. After that, I stopped talking. My voice escaped me and disappeared into the night.

When we returned to my apartment earlier in the evening, I thought we would sleep together in my bed, as friends, like we had done so many times before. But, when we laid down for sleep, he became aggressive and flirtatious. Panicked, I took him outside. I thought I would be safe there. It was a clear quiet night, way past last call at the bar.

But, in the silent early hours of the morning, he persisted and continued to pursue me.

I lay there, waited for him to finish, feeling lifeless, detached from my body. I saw that his hands were wrapped around my hips, but I couldn’t feel his grip—I was numb. My ribs and spine jammed into the wooden planks with each thrust he made. When he was done, I rolled myself over to my side, struggling to get up. I was unable to move without wincing in pain.

We left the porch and walked back inside into my bedroom where we slept together as if nothing had just occurred. When he left in the morning, I walked him to the front door and said, “Bye, I’m so glad we got to catch up. It’s been way too long. Let me know when you are out here again. That was fun.” I lied.

I lied to him and I lied to myself for years. I hid the gravity of the event from my consciousness. I reframed the assault to protect myself from the harsh reality of rape.

He would never try to hurt me. He is my friend. I trust him.

I fed myself lies for two years as I struggled to move on with my life.

Everything started making sense only when I stopped lying to myself and acknowledged my trauma. The fog rolled out from my mind and it became clear that I had been a victim of rape.

The walls I put up to protect myself crumbled as I fell into a dark hole of depression. I grieved, and surrendered to all the delayed emotions I had tried to protect myself from. Guilt, shame, trust, loneliness, and embarrassment filled me.

My guilt and embarrassment were so great that they threatened my life. I didn’t care if I lived or died. I had no intention of hurting myself, but I had no desire to continue living—I was indifferent about life. Once I started crying, I couldn’t stop. Tears rolled down my face for an entire month. I was lost in myself, buried in a mountain of embarrassment and shame, isolated in my emotions. I was lonely and self-loathing.

The night it happened, after we said goodbye, I put myself in the shower and examined my body. My hips were spotted in bruises from where he had gripped me. My vagina was swollen and raw. Friction burns scattered my shoulder blades. As the water fell down my back and over my body, I blamed myself for the physical injuries I saw. I began listing all the reasons they were my fault as I tended to my wounds.

Two years later, I was reading a book on the beach, my toes buried under a pile of sand. I started to read a chapter entitled, “Consent.” As I read, that clear, quiet night on the porch kept playing over and over again in my mind.

Did I give consent? No. Did I say stop and push him away? Yes. Did I trust him? Yes.

I put the book down and digested all that I had uncovered. I faced my past head-on as the ocean waves crashed beside me. My mind began to race as I questioned what I had discovered.

How did I not know what consent was? Did I not realize I was raped? Am I dumb?

I considered myself well-educated, and regarded myself as empowered and strong. I knew the definition of rape, I knew the statistics, yet somehow I still found myself the victim. I was, and am, a victim of rape. My voice had failed me in my time of need. My body shut down while I was being attacked.

Because I trusted my “friend” over myself. I put him ahead of me. I was not a good advocate for myself, and pushed passed my needs. I shut down and succumbed to the assault. If a stranger assaulted me the way my friend had, this may never have occurred.

After I acknowledged the rape and the feelings I had around it, I started opening up and sharing my experience with others. I told my parents, my siblings, and friends. The more I started talking, the better I felt. Reaching out to others helped me to realize that I wasn’t alone. As I shared my story, I recognized that it was okay to be myself. I gradually started to feel more comfortable in my skin. Meditating helped me to clear my mind, I began showing myself the same kindness others had shown me.

Through the trauma of rape, I have found my voice. I have learned to be my own best friend. I have learned to listen to my gut and to assert my needs. I am not afraid to be myself anymore. I am unapologetically myself. I am more mindful through meditation and I practice self-love.

I have become more aware of the pain and suffering that all of humanity endures. Now, I have the ability to empathize with others because I understand pain. Initially, trauma can be too great to comprehend, which is why I hid my trauma from myself until I was able to digest the truth. Confronting trauma is so uncomfortable it can be paralyzing. Though it is difficult, it is necessary to confront our trauma and pain in order to heal and to move forward.

Sitting with the uncomfortable emotions allowed me to make friends with them, and to let them go. I am no longer embarrassed, guilty, or crippled by my trauma—it does not define me.

I have evolved and learned a great deal from the pain.

My trauma has connected me to myself and to others, and for that, I am grateful.

A Survivor’s Guide to Rape. 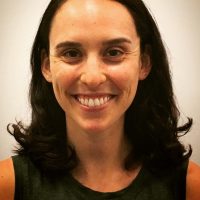 Abby is a Board Certified Nurse Coach who works with clients looking to improve their health and wellness, connect to their inner light, and live authentically.  She is a Yog… Read full bio