New hats are in! Get yours and #makelovegreatagain: elephantjournal.com/hats one for $29, or two for $50.  #everyhatplantsatree  Hopefully these hats will engender lots of pleasant conversations and comings-together about important issues between folks who might not normally talk to one another, much. 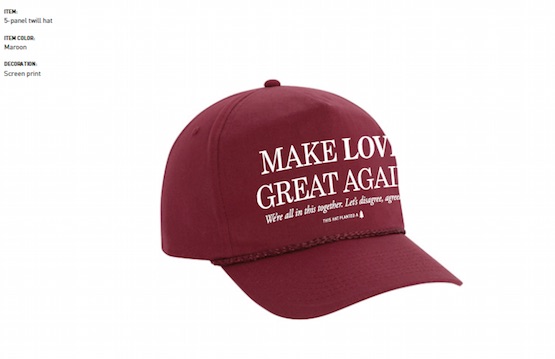 Racist!, some of us cry at others of us.

That’s no way to start a conversation, or educate he or she who might, indeed, have some very real prejudice.

Libtard, cry others! N___r! SJW! Cuck! It’s a war of words, and as we know, having drowned in death and suffering only a century and change ago, rhetoric can end in brothers killing brothers and sisters killing sisters.

Hate will get us nowhere, as Martin Luther King, Jr., concluded. Jesus concluded the same thing, as did Gandhi, Ashoka, and Buddha.

Those who decided otherwise choose to walk in blood. Bloodshed never heals.

We know all this, and yet—and yet—we are all consumed in self-righteousness, the cousin to aggression.

And so I’ve decided to lay down my moderate liberal tendencies and offer a hat, however token this gesture might be, that might connect with the hearts and minds of all of us—Trump supporter, Republican, Democrat, Bernie fan—whatever our relative allegiance, we can all agree that, like it or not, we’re in this together.

So let’s remind ourselves, and one another, of this solemn truth. Whatever your view, we will get nowhere through hate. Nowhere except war, and pain, and suffering, and pain, and pain, and grief, and aggression, and further aggression. Even those of us enjoying our hatred do not want to see what we hold dear hurt. And so, as Donne reminds us, we’re all part of the maine, we are all the same island.

There is no away. We’re stuck with one another. Let’s enjoy it.

Yours in the Vision of Enlightened Society, 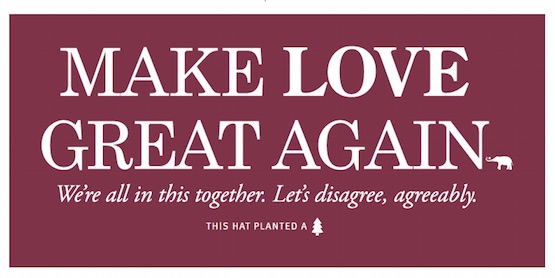 Be the first to wear the new hat: elephantjournal.com/hats

Can’t we all just get along? We have very real differences—but, too, we all need to get outside of our own choirs and bubbles and remember we’re all in this together—and we got to put the civil back in civilization. Let’s listen, not just holler! Wear your heart on your head for all to see—let’s Make Love Great Again.

Every hat plants a tree.

Hopefully it’ll be meaningful and fun for allll of us…right and left and up and down…to wear and share! 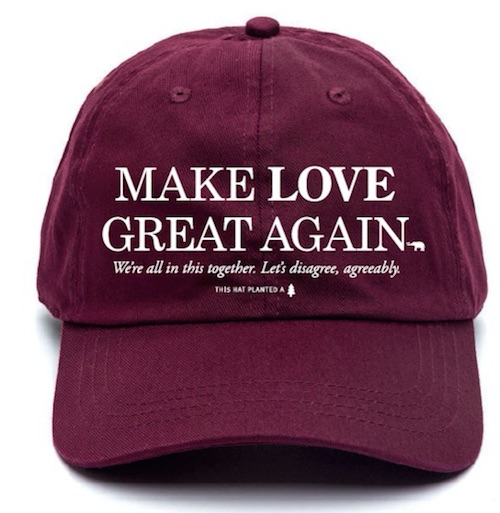 PS: so many of us are hating on Nazis, right now. I get it. The Jewish half of my family was…involved in WWII.

But here’s why you’re wrong. As Allen Ginsberg, a Jew and a more accomplished activist than almost anyone in the past century reminded us, “Aggression begets aggression.” As Trungpa Rinpoche reminded us, if we don’t tame our own selves first, we will only create further confusion in the world as we try to forcibly change it for the better.

Not convinced? I don’t blame you. Here’s more:

This is not about agreeing with Nazis, or sympathizing. This is about defending someone’s right to be wrong. Freedom of Speech—remember that the ACLU has a proud history of defending the Nazi’s right to protest up and down our Main Streets. This is in our Constitution.

We win not by anger, but by listening and talking and creating peace when it’s hardest to do so. Finally, I recommend this approach: it’s on Netflix right now.

A lot of us are (understandably) hating on Nazis and racists right now. But Daryl Davis has a more effective, and better, and braver, and more American idea:

“On the top are Anti-Racist protestors in Boston, on the bottom is the Alt-Right “free speech” rally they were protesting.” (i.redd.it) “Boston is marching 15,000 strong according to police estimates. Absolutely beautiful.” ~ thedorkofyork, on Reddit. I hope she has the mouse-over text printed On the other side. Those are sometimes the best part.

edit: I was right, it is the best part. Here you go guys.

I can’t remember where I heard this, but someone once said that defending a position by citing free speech is sort of the ultimate concession; you’re saying that the most compelling thing you can say for your position is that it’s not literally illegal to express.