More than Compassion: The Gift of Empathy. 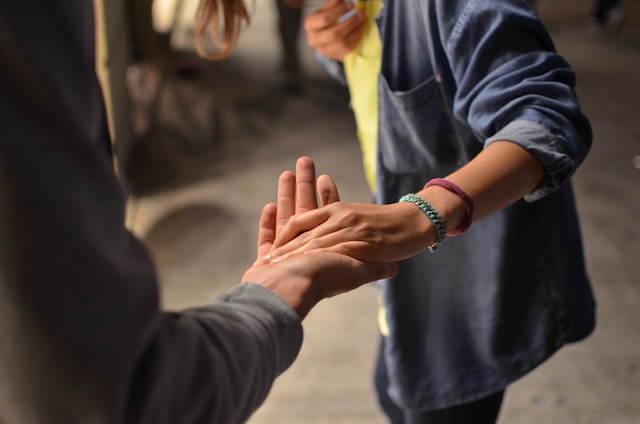 There was a time when I, like many people, did not have that much compassion for others.

I had dreams and goals and a path to get to where I was trying to go, and I ignored whatever anyone else in the world was going through. Perhaps, on my more receptive days, I would feel a small tugging when I heard or saw something that made me feel sympathy, but it wasn’t too often.

Then, one day a couple of years ago, I had the most visceral thought during a compassion meditation, and it changed me forever.

I imagine myself as a teenager again. It is the summertime, I am working a part-time job, dealing with the woes and self-consciousness of being 17 years old and having my crazy adolescent ups and downs when, all of a sudden, I receive a Facebook message from a girl I am obsessed with.

I can feel that rush of dopamine, excitement, and titillation of great expectations and great times to come. We message back and forth and it really seems to be going in the direction I had hoped for. Two days later, we go out to a dinner that I totally cannot afford, but I don’t care.

I stare across the table at this girl I am dead-set on making my girlfriend. My gut is telling me that I am going to be able to do it too. The conversation flows so naturally, it is as if we have known each other all our lives. We are laughing and joking as we walk to the car and I stop to look into her eyes. We kiss for the first time and, as corny as this sounds, I literally feel fireworks going off.

We are having such a good time that I do not notice we are doing 45 mph in a 30 mph zone. I see the bright red and blue lights light up the sky behind me and the whole world changes in that very instant.

Given my race, there is a real chance that I may not make it out of this traffic stop alive. This could be the last few minutes of my life. I can feel my heart beating percussively through my sweater. I can’t help feeling how unfair it is that I am this scared for no other reason than my race.

Do I reach for my wallet? What if he mistakes…or says he mistakes me for reaching for something else…

“Where are you coming from?”

This is what happens in this country every single day, and when I was able to picture this that clearly, I felt real compassion for the first time in my life.

Now, I am not making a political statement here. What I am trying to explain is that in the United States, a person gets shot by a police officer every eight or nine hours, and black males are nine times more likely than other Americans  to be the victim. This is not some liberal rant; there are real people who, in 2017, have to worry about coming home alive when they leave the house at night.

I believe that when I was able to move my heart from reading disconcerting news stories into a real place of what this actually felt like, something changed in me on a neurological level. It made me a kinder and warmer person to everyone around me.

In a discussion of compassion I had with someone not too long ago, she explained that reflecting on the hurt and pain of others brought her into deeper despair. I am not discounting this as a possibility, but I believe that that is a short-term result.

When the Dalai Lama said, “Only the development of compassion and understanding for others can bring us the tranquility and happiness we all seek,” I am fairly certain he was referring to the long-term and overall good we are putting out into the universe when we are able to feel another’s pain.

We, in this country, are not used to putting too much stock into conclusions that don’t appear immediately, but it’d be a good idea to start.

When you practice daily and regular compassion for others, you suffer from less loneliness, isolation, and disconnection. There is serious empirical data that would most likely bore you to tears that supports this. As a matter of fact, compassion is a naturally occurring phenomenon that can be seen in the animal kingdom—most especially among primates. It has only been leeched out of us wholesale by our western conditioning of evaluating, judging, and competing with others. This might have more to do with our need for therapy and anti-depressant medication than you might think.

What it really comes down to is fear.

Whether it is the fear of being seen as too weak, too vulnerable, or too much of a pushover, it all results in these kinds of inhibitions that lead us to being disconnected from one another, and just plain miserable. You’ll hear people refer to general malaise or “just plain blah,” but from my cursory research, I would venture an educated guess that the roots of this pall are hidden somewhere in our inherent selfishness as a culture.

But, it is never too late to start caring about others. You can start today.

If meditation is your thing, try to envision a real scene such as the one I described earlier. You can mindfully and quietly put yourself in the shoes of another. If you are not a person who typically engages in meditation, you can transport yourself to this same place with a silent daydream when you are able to garner a little bit of alone time.

Either way, you will be single-handedly taking some of the pain out of the universe and make yourself a little more healthy in the process.