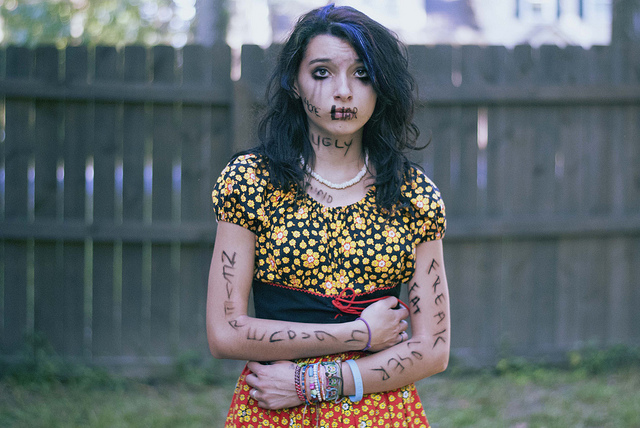 The childhood saying goes, “Sticks and stones may break my bones, but words can never hurt me.”

We’ve all heard it, haven’t we? Then, we grew into teenagers and romanticized the tragedy of William Shakespeare’s Romeo and Juliet. “What’s in a name? That which we call a rose by any other name would smell as sweet.”

We grew up being told that words don’t matter. Words don’t have power. Any name is as good as another.

But, we all know it’s not true. Words hurt. They hurt like hell. Whether it’s name calling, racial slurs, unwelcome advances, or simply someone we love saying goodbye, words can break our hearts and hurt more than simple cuts, bruises, or broken bones.

Words are extraordinarily powerful. When people use certain words, the intent is to disempower others. At this point, it becomes vitally important to reclaim our power.

This has been on my mind for a number of reasons. Today, I was reading about how United States Senator Elizabeth Warren was one of the senators responsible for blocking Betsy DeVos’s attempt to consolidate student loan providers.

Senator Warren has long been a champion of students, student rights, and an advocate for student loan reform. DeVos, on the other hand, is financially tied to a key student loan service provider. Thinking of Senator Warren, I remembered how in February 2017, Senate Majority leader, Mitch McConnell, attempted to silence her on an issue. He said, “She was warned. She was given an explanation. Nevertheless, she persisted.”

I was thinking about this because it’s just one example of how some words are meant to take away the power of others.

But, here’s where he made his mistake. You see, “nasty women” like us have learned to reclaim the power of the words used against us. We took up the battle cry of “Nevertheless, she persisted,” and made it our own. In fact, it’s tattooed on my skin along with the “three waves of feminism.” He meant to take away her power, but instead, armed us all with a catchphrase that rallies and inspires us.

We did it when Donald Trump, a then-presidential candidate, called Hillary Clinton a nasty woman. And, when the tape leaked of Trump bragging about how often he sexually assaults women, women all over the country knitted pussy hats and took to the streets in an act of defiance, but also in a move of empowerment for all women.

I’ll admit: I used to hate the word “pussy.” It made me cringe because it’s one of the many ways in which women have historically been disempowered. But, now I use it to make other people uncomfortable about their decision. If you voted for a man who is known for his ill-treatment of women, you shouldn’t mind if I call him the pussy president. You voted for that language—you gave it your stamp of approval. We’ve reclaimed the power by taking it back for ourselves.

Other examples include women reclaiming the word “bitch.” The expression goes, “Bitch is the new black.” It’s a word that was used to insult us, and we reclaimed it for ourselves. It doesn’t mean a horrible woman. It simply means a powerful one, one that gets stuff done (as Tina Fey proclaims), one who is not intimidated by men in the workplace, or a woman who makes her place in the world.

Here are a few others that have been reclaimed: tree hugger, redneck, Jesus freaks, and queer. Even the term “suffragette” was a word reclaimed by a previous generation. Reclamation becomes important because of the power in words—written and spoken.

Language is powerful. How we use it and how we respond to it are incredibly important.

For many years, people of color (POC) have been referred to using a variety of words. Common language has evolved over the years, and some words have been reclaimed, while others have simply become verboten as society has decided that they were beyond the pale. “Retard” comes to mind, and I shudder even thinking it.

Most of us understand the power of language—particularly when we’ve had it used against us, and we’ve even developed an entire vocabulary for social justice reform. We use these words to talk about the issues of our day: misogyny, racism, sexism, xenophobia, homophobia, transphobia, Islamophobia, white privilege, white feminism, white and male fragility, ableism, mansplaining, ageism, anti-semitism, cisgender, and so on.

The Zeroth Position gives us a fairly comprehensive Social Justice Warrior Terminology breakdown. We’re striving to be more inclusive of other human beings, but the world is changing at a much slower pace, which is why it’s essential that we quickly reclaim words as they’re sent out to hurt us.

But, here’s another thing about the power of language that I haven’t even mentioned: it also has the incredible power to move us to more than just rage or hurt or to become social justice warriors. Words can be used to uplift, to inspire, and to bring joy. What we say to others can have incredible power, and we have the ability to choose how to use that power.

Will we use it to eviscerate, to maim, to disempower someone else? Or, will we use it to advocate for change, to inspire, to encourage, and to remind others of their essential worth?

When we go beyond simply recognizing the power of language, we need to recognize we are tasked with using language in a way that does more than just protect us from the barbed words of others. We need to do more than just reclaim nasty words from small-minded people. We need to learn to use the power of our words to make the world better.

How? How can we not only reclaim our power over the words that hurt us but also use words in a way that empower others?

We can start at home. We can speak to our children in love and with kindness. Sure, they don’t have to work or pay the bills, but that doesn’t mean being little isn’t tough. The world is new for children, and they’re growing and changing and learning all the time. That means making mistakes. That means having bad days. That means not always behaving ideally in every circumstance. That means trying to figure out where their autonomy begins and ends.

We can use our powerful words to let our children know that they are safe, loved, and perfect—just the way they are. We can let them know that we’re proud of them. We can teach them to be kind by being kind ourselves and modeling that behavior toward others.

We can tell our significant others, family members, and friends, that we love and appreciate them. We can recognize when they do something well, rather than pointing out their faults. We can support them in their endeavors, whether or not we would make the same choices as they are making. We can encourage them when they don’t feel like their best selves. We can remind them that they are enough. We can forgive them when they make mistakes, and we can ask for forgiveness when we do. We can speak to them with love, warmth, and understanding. We can listen to them and practice non-judgment.

We can go to work and tell others that they are doing a good job. We can point out strengths instead of challenges. We can avoid gossip because we know that it isn’t kind to talk about other people behind their backs. We can praise the work of others to our bosses and speak kindly about our colleagues—yes, even the ones we don’t necessarily like. We can pay appropriate compliments and notice when others are showing improvement or simply making the workplace better with the energy they bring to the table.

We can go to our places of worship and celebrate what we believe without tearing down the beliefs of others. We can avoid gossip and judgment. We can focus on using our words to lift others up rather than pointing to their failings. We can use our words to communicate about our own struggles and be an example to others of perseverance in challenging situations.

We can look strangers in the eye and say hello when we go about our day. We can make friendly conversation in lines. We can pay appropriate (not creepy) compliments to others. We can thank others for their service when we’re interacting with cashiers, servers, public servants, teachers, and any other people we encounter in our day.

Sticks and stones aren’t the only things that hurt, and the words that we use do matter—enormously! It’s our responsibility to use them well, to use them wisely, and moreover, to use them kindly.

Crystal Jackson is a former therapist turned author. Her work has been featured on Elephant Journal, Medium, Elite Daily, The Urban Howl, Your Tango, and The Good Men Project.… Read full bio