The Truth can’t Set us Free if we don’t Set It Free First.

Two women sat quietly on their living room couch. I was one of those women.

The couch, which had been purchased just 10 months earlier when we moved into our new home, felt like it was already a decade old. Worn in from all the nights I opted to fall asleep on it, and all the days I spent seemingly glued to it while I injected reality television and Instagram feeds into my bloodstream in an effort to numb the emptiness I was feeling.

The back of the couch, right behind the spot where I was sitting, was also worn in. One of our dogs, Lexie, liked to sleep there—right above me—during the day. This always made my partner a little peeved. “Big Girl, get down! You’re ruining the new couch,” to which Lexie would look at her (as only an alpha, 10-year-old dog, whose owners are wrapped around her little paws, can do), let out a long sigh, and lay her head back down in defiance.

As I think about this, I wonder if my partner actually meant to say these words to me.

But here we sat, on a couch that looked and felt much older and run down than it should have. Two women who felt the exact same way about themselves.

But this time, for some reason, they pushed hard enough to roll over that sticking point. And just like dogs who have been barking to be let outside for hours, or kids who just heard the bell for recess—as soon as the path was cleared, the words came rushing up and out and scattered themselves between me and her, across the living room floor, and onto our gently-used, stain resistant microfiber couch.

There they were. Peeing on the lawn, fetching a stick, dangling from the jungle gym, playing tag. Taking what seemed to be a perfect yard, green grass, wood mulch, flower beds…and f*cking it all up.

I knew in that moment that it was over. I knew that we would get a divorce and that we wouldn’t be in each other’s lives anymore. I knew that our best efforts had gotten us “here,” and “here” was a place better left moved out of. “Here” was a place where our couch suddenly became her couch, and now it completely made sense why I always felt more comfortable sleeping there than I did in her bed.

If they would only, I would just.

If they would…I would.

But the truth is, we wouldn’t. Because we’re not right now. And what we’re really doing when we say this is stuffing the truth back down where we think it belongs. We’re cramming it down deep into parts of us that we can see, so we can pretend it doesn’t exist.

And so, it grows—it grows like a tumor fed by darkness.

Because a lot of the time, my truth is this: I am unhappy. I don’t love myself. I’m not in love with my partner. I don’t want to be in my relationship anymore. I am gay. I am an alcoholic. I really don’t want to spend Christmas with my partner’s family. I am afraid I’m not good enough to be loved. I want to quit my job. I need space. I want to move.

But the truth, by definition, can’t be changed.

So the tumor grows, and it begins to erect this structure between us, so that we can’t see each other anymore. So that we’re blindly hurling balls of insults at someone we actually haven’t been able to see in a long time.

And when the pain we are throwing bounces back off the wall and smacks us in the face, we think the other person was the one who did the throwing. But that ball of pain was all ours. We are in charge of our own suffering.

That was my partner and I, until that day on the couch. As soon as the words came out, that thing that was growing inside of me burst. And for the first time in a long time, we saw each other—tired, lonely, bruised, disappointed, and unhappy.

We saw that we loved each other, but that it was time to move along.

It was in that moment, in my old living room, that I first began to understand that I had blamed someone else for my own unhappiness for a long time. That once the truth is out, you realize it’s your responsibility, but you also realize you can’t ever love someone with a wall erected between you. You can’t ever step into the “I woulds” if you’re not being honest about what it is that’s holding you back from doing them.

Opening the gates and letting the truth rush through is scary, but not as scary as letting it metastasize into suffering. It isn’t as scary as living the rest of your life numbing yourself out on whatever you can get your hands on.

And it certainly isn’t as scary as needing a new $1,500 couch every few months for the rest of your life.

We think the dogs and the kids ruin our yards, but imagine what they’ll do to the inside of our homes if they never get let out. 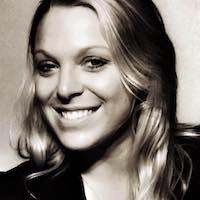