Are Women Manifesting their own Money Problems? 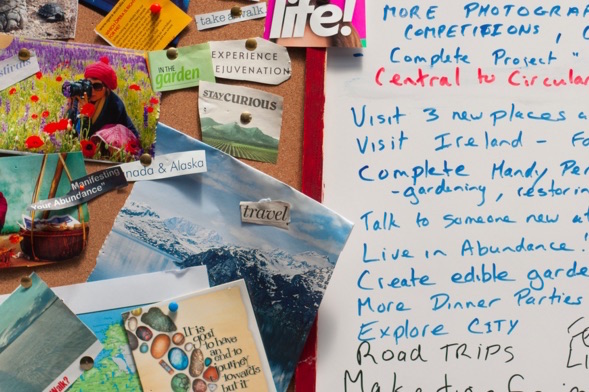 Ever since The Secret spilled the magic beans on manifesting, vision boards have been popping up on personal altars like crazy.

“Manifesting” is considered by many as the art of imagining what we want our lives, and then acting as if it’s already there. Instead of focusing on the lack of a Russell Brand lookalike in our life, we act as if he’s already there. This cosmically shifts our energy to the point where the universe plants Rusty 2.0 in our local coffee shop—and when this happens, we write a gratitude list and tell all our friends.

There is something inherently reassuring about manifesting, particularly for women. The patriarchy may be conspiring to keep us enslaved to our ovaries while excluding us from economic power, but hey, at least #TheUniverseHasMyBack.

Are we using semi-spiritual practices to procrastinate meaningful financial decisions? And at what point does our #inspo become the very thing holding us back?

“Scientists once believed the universe was a chaotic collection of matter. We now know the universe is essentially a force sending cosmic guidance to white women in their 20s.” ~ Inside Amy Shumer

“I work with so many women who love creating a vision, but get derailed at the implementation stage,” says Marisa Punshon (aka “Miss Moneypenny). “As the former financial guru for women’s business network Ausmumpreneur and now a “vision partner” for entrepreneurial school, The Entourage, Punshon has a foot in both camps.

“Manifesting has come to seem like this magic bullet, but there are people on social media selling women an impossible fantasy, bragging about going from being in debt to earning six figures in three months. I have clients coming to me feeling like failures because they’re not living that life. It gives me the sh*ts because it’s not real.”

For many women brought up to seek approval, entering a financial world that is still so male-dominated is an intimidating prospect. Add to that the toxic perfectionism of feeling like we have to have it all “figured out,” and suddenly, asking the universe to swoop in can seem preferable to feeling like a failure. She continues:

“Lack of self-worth is a huge barrier to taking action, as is feeling like everyone knows how to do it except you. I see women trying so hard to make it hit an obstacle and give up feeling like they’re useless. They’d set up accounting software, for example, make complete and utter mess of it because they didn’t know what they were doing, and give up.”

While men might be more likely to just hire someone to do it for them in order to invest money and time into executing a financial plan, you need to feel that you deserve to—you’re essentially saying, “I am worth investing in.”

Women often face additional pressures because they’re often the primary caregivers in their families. Putting their own plans on hold to tend to others can come with an added feeling of not living up to the business or financial goals they’ve set themselves.

“When I go to conferences and seminars and see a group of men standing around in their suits, I wonder if I’d feel comfortable raising those issues as a client. But a lot of the work I do with women is about devising a plan that can take those vulnerabilities into account so they don’t derail you,” says Punshon.

While vision boards are nice to look at, nothing beats the feeling of seeing our bank account grow IRL. Here’s how:

1. Be clear on where you want to go and why.

“You need to have that vision clear because you’re going to get side-tracked,” says Punshon. “There’ll be times when you have no money, you lose your biggest client, the computer breaks, and you think, ‘Oh sh*t, I hate this, I’m no good.'”

“If you sit on that, it will immobilize you. Having a clear vision will be like a magnet, so when obstacles stop you momentarily, if that vision is strong enough, it will help you realign and keep going.”

>> Emotionally: Get clear on what fears and beliefs you have. For example, ‘I’m not tech-savvy,” or “rich people are jerks.” These ideas might come up as you implement a financial plan, so you can work around them before they work around you.

>> Circumstantially: Take into account your circumstances and responsibilities so you can realistically plan around them. Funny how many manifesting gurus don’t seem to have young children!

>> Numerically: What’s in your account? How much do you owe? How much is coming in and going out? How much surplus do you have and where is it? (This is the most tedious part. Schedule a reward for after.)

If you’re a business owner, consider what structures are in place, and what might need to be built around them.

“One of the reasons people don’t end up taking action is that they think they’re going to have to see a financial advisor, everything will have to be re-structured, it’ll cost a lot, and so on, so they put it off,” says Punshon.

“But a financial plan can be as simple as asking your bank or employer to re-direct an extra 20 dollars a week into your surplus.”

I borrowed The Barefoot Investor from my local library, chose three easy things I could do straight away, and already I feel like Richard freaking Branson.

Instead of thinking grand, swooping gestures, remember that small actions build momentum. “Make simple actions non-negotiable,” says Punshon. “It is non-negotiable for me that every Friday night I spend 20 bucks on a bottle of wine. If I can do that, setting up a direct debit to siphon 20 bucks a week into a savings account is a no-brainer.”

The final stage in manifesting comes from the Buddha. Detach. Have a plan, do what you can, but leave room for life to step in. How boring it would be if we all ended up with exactly what we asked for?