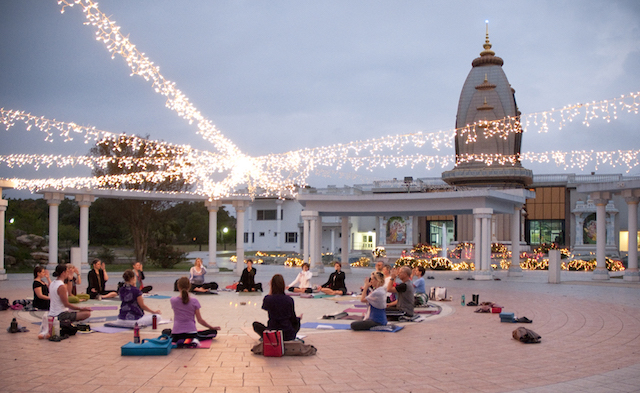 In the late 1990s, when it was announced that the Southwest Yoga Conference would be moving its annual meeting from Texas to the West coast, longtime Austin yoga teachers Donna Belk, Charles MacInerney, and Ellen Smith immediately recognized that there would be a huge void.

When Charles gauged the response at a subsequent community meeting of Austin yoga teachers about how many people would be interested in co-creating a new yoga conference in Austin, almost every hand in the room went up. When he asked how many people would be willing to commit themselves financially to covering any financial losses in a worst-case scenario, only two hands stayed up: Ellen’s and Donna’s.

Their initial plan was to follow in the footsteps of the Southwest and Yoga Journal style conferences, bringing in a few big-name teachers to draw in registrations and additional teachers to fill in the rest of the schedule. They could have built an event around Krishna Das and John Friend, who were both then emerging as mega-stars in the yoga community.

However, in creating their vision statement—“Building a caring, diverse and empowered yoga community”—the Texas Yoga Retreat co-founders realized they wanted to combine the best attributes of a conference (experienced, high-caliber teachers, multiple workshop options during each time slot), with the best aspects of a yoga retreat (community, compassion, and shared experience).

Bringing famous teachers on board was actually counter-productive to this goal of building community and keeping the retreat affordable. Over the years, they have continued to deliberately invite amazing, local teachers (mainly from Texas) who are not yet famous but should be.

The moment you step onto the grounds at Radha Madhav Dham Ashram in southwest Austin, the incredibly peaceful and loving energy field there is palpable. Built in 1990, the ashram grounds feature 230 acres of rolling green hills, lots of wildlife, including dozens of peacocks milling about (babies are born each spring), luscious gardens, walking trails, and the Ancient Yoga Center, a section of the ashram specifically intended for retreats. With no TVs or cell phones in sight, the ashram is a true sanctuary, enabling all those bathed in its glory to restore their body, mind, and spirit.

Charles, Donna, and Ellen met a devotee from the ashram at a gathering of the Austin Yoga Teachers Association in 1999. When they inquired about the possibility of offering a yoga retreat there, the three were invited for a meeting with a man called Swamiji who was the spiritual leader of the center at the time. They apparently passed the test and were later told that Swamiji had requested the meeting because he needed to look into their hearts. He must have found their intentions to be pure and true. The colleagues were also instrumental in organizing the first few years of the annual Free Day of Yoga in Austin on September 1st, and the three also collaborated to create a yoga teacher training called the Living Yoga Program which continues to be held regularly on the grounds of Radha Madhav Dham.

The inaugural Texas Yoga Retreat in November 2000 was the first time that the ashram had ever invited an outside group to host an event on the property. Year after year, the ashram has been a wonderful spiritual home and the devotees who live there feel like family. The Texas Yoga Retreat is a unique, beneficial, and authentic gathering that has been held annually each fall. Back when it was just beginning, I volunteered to help with marketing and promotion. Throughout the early 2000s, I was blessed to be able to attend the event several times and participate in many inspiring workshops led by talented teachers across many diverse lineages and style of yoga.

Much has remained constant over the nearly two decades since the retreat began. The organizers collect student evaluations after every workshop. The majority of presenters are chosen from the best of previous years’ retreats. These presenters not only deliver quality workshops, but more importantly, they love teaching at the Texas Yoga Retreat and immerse themselves in the experience, rather than just showing up to teach and leaving again.

About 20 percent of the presenters are chosen for the quality of their reputation and the content of their workshops. Ellen says, “The teachers we hire are deeply steeped in their own field of practice and this comes through in their teaching. Although you may have been studying yoga for years, these classes are specifically designed to take you to the deeper level, a more authentic level of teaching that you will not typically find in a regular yoga class.”

The participants benefit by getting away from their day-to-day responsibilities and stressors. When they drive through the ashram gates and see the gorgeous, other-worldly ashram grounds, participants feel themselves immediately decompressing. Residing at the ashram, even for just a few days, helps attendees connect with their hearts.

Most participants elect to stay overnight on the ashram grounds for the duration of the retreat (Friday to Sunday), so this decompression, relaxation, and rejuvenation deepens over the course of the retreat weekend and can last for weeks after the retreat ends. According to Ellen, “it gives them a touchstone to remember what it was like at the retreat, in that embodied state of living more authentically, so when daily life gets busy or stressful, they can touch into that place of remembering.”

Naturally, there have been significant changes and evolution in the process. Donna Belk left the Texas Yoga Retreat and Living Yoga Program in 2009 to pursue other professional interests. Charles and Ellen continue to collaborate on both endeavors. This will be their fifth year to offer a Yoga Therapy track at the retreat, sponsored by the International Association of Yoga Therapists.

These workshops are open to any student with an interest in the topic, as well as teachers interested in learning more about Yoga Therapy. A sampling of the yoga therapy topics for this year include: Mudra and Pranayama for Common Health; Yoga for Anxiety—for the Individual and the Healing; Integrated Movement Therapy and How Trauma Changes the Brain.

Charles admits, “Event planning is always difficult for me, but once the Texas Yoga Retreat starts, I am always so grateful for the opportunity to be immersed in such a wonderful community and all the hard work of the previous year is redeemed.”

This year’s retreat will be held from October 20-22. You can attend the entire weekend or just come out for the day on Saturday or Sunday. Find more details here.