What Exercise Culture in Asia can Teach us about Workplace Health. 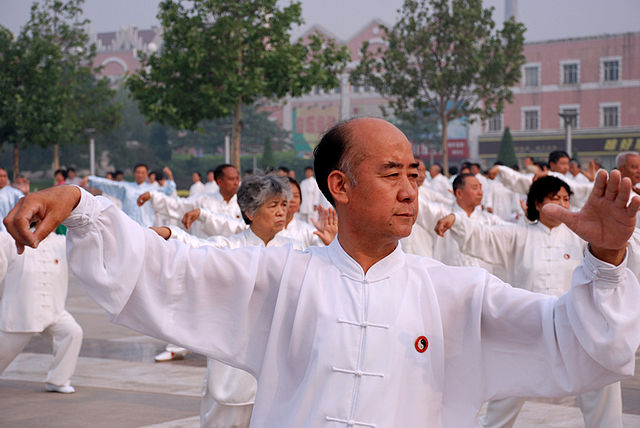 Go to any city park in the early hours and it’s not unusual to see a fit-looking Asian octogenarian or two putting themselves through the graceful paces of a Tai Chi session.

“Such discipline!” we marvel.

In Asia, however, exercise is not seen as something only the virtuous disciplined get up to do. Instead, exercise is enshrined as a normal part of the workday culture to the point in which employees exercise together before the day begins. In Vietnam and China, for example, it’s not uncommon to see retail employees doing calisthenics together on the street or in a park before they open for a day’s trading.

We, on the other hand, are a nation of fatties. Almost two out of three Australians (63.4 percent) are overweight or obese. And that boot camp session we’re cramming in after work? Not cutting it.

Even among exercisers, sitting for more than six hours a day—according to Harvard researchers—is giving us type 2 diabetes and sending us to an early grave.

“The problem is, modern workplaces are often set up in ways that promote ill-health. Our work style has changed,” says Dr. Peggy Kern, a senior lecturer at the University of Melbourne’s Centre for Positive Psychology. “We’ve gone from manual labour incorporating lots of movement, to people sitting six to ten hours a day. Research is showing that even the minimum recommendations of 30 minutes exercise a day is not enough to counter how much we’re sitting.”

While management may not be personally invested in your blood pressure, they do care about their bottom line. And, says Dr. Kern, “We’re starting to see how much unhealthy workers really cost organisations and society as a whole.” A PricewaterhouseCoopers report estimates that weight-related health issues costs Australian workplaces $477 in absenteeism alone. And a staggering $544 million in lower productivity “presenteeism.”

“But as much as we can get sucked into dollars and sense, the biggest commodity is people. In the olden days, people were disposable,” says Dr. Kern, and many workplaces still undervalue their staff to their detriment.

“Finances are recorded quarterly but we need a huge shift in mentality about the longer term gain. Because the research says that when companies do prioritise employee health, while there can be short-term costs, it’s actually a big cost saver over time.”

So here’s a radical idea: If spending so much time at work is contributing to our obesity problem, could it also be part of the solution?

Japan, a country famous for its efficiency, has a term, “kaizen,” which means “continuous improvement.” Basically, if something is proven to improve efficiency, they’ll do it. And since volumes of research point to the boost to productivity created by even short amounts of incidental movement (minus the caffeine crash) many Japanese companies have mandatory exercise programs for employees.

They even have a radio station which broadcasts exercise music and instructions, and workers from the factory floor up to management level tune in and work out together.

In the West, the boundary between work and private life is disappearing. To retain employees, top notch workplaces have lounges, sleep pods, and “play zones.”

But, do our Asian neighbours have the right idea? Is it time for all employees exercising together at work to become the norm? Is it time Australian workplaces tuned into “Radio Taiso” and got their employees to line up in front of the HR manager and do this before their morning coffee?

“I don’t see that happening any time soon,” she laughs. “Japanese culture values the collective over the individual and there’s a much higher premium on obedience. Australians like independence much more.”

(Indeed, not all “kaizen” ideas work outside of Japan. Steve Jobs famously admired Sony’s practice of having employees wear uniforms, but was laughed out of the building when he tried to get Apple employees to take to the turtleneck.)

But, she says, employees are hyperaware of how their workplaces are contributing to ill-health and want employers to take part in addressing it.

“What would work better in Australia would be if a company with its employees were to say, ‘Let’s come up with an activity we can do together that becomes our collective identity.’ It’s about creating a culture of ‘this is what we do because we value it together’ rather than something enforced by management.”

“You’ll still get some employees saying, ‘Yeah, no,’ and you have to respect that. But social norms are very powerful, and as more people take it up, those people either conform or become the outlier.”

Part of the problem is that many companies pay lip service to employee health and well-being without actively supporting it. And while many workplaces do offer gym memberships and well-being programs, employees don’t feel they have the time to use them.

“Underlying messages are much more powerful than any policies,” says Dr. Kern. “What do employees see leadership doing? You look at managers but they’re doing 80 hours a week. Is the unspoken message, ‘We want you to be healthy, but you have to do all this first?'”

“Getting leadership on board is essential. Not just ‘management says we value well-being,’ but owning this message in a way that employees see it as well. Otherwise any initiative led by management will actually feel manipulative, as in ‘we’ve checked that wellness box.’”

“You can start by giving them easy access to opportunities: encouraging walking meetings, healthy eating, and offering standing work desks, and mindfulness sessions.”

“We need to create structures that give employees the tools to take responsibility themselves. All we need is to see one of our close coworkers suddenly die, then that’s a motivation. If you stay healthy, you can retire with a third of your life still ahead of you. Don’t end things long before that.”