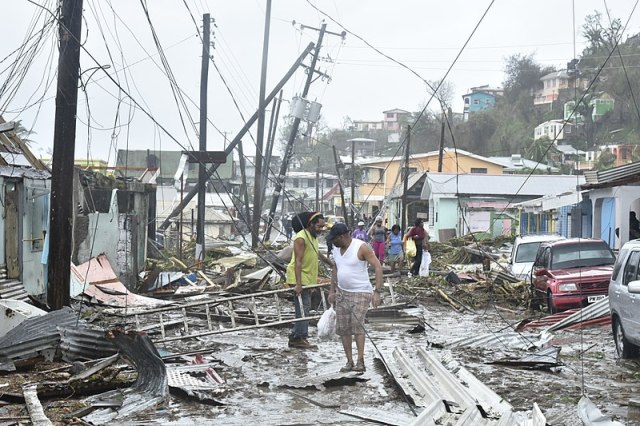 In 2010, after a seven-magnitude earthquake struck Haiti, President Obama did everything within his power to co-ordinate a massive military and civilian response.

Within two days, he sent 8,000 troops and plenty of supplies to the country. Within the course of two weeks, the number of troops climbed to 22,000, along with 33 Naval ships all carrying supplies.

However, this week, as we are continually reminded that 95 percent of Puerto Rico is still without electricity and half the population has no access to clean drinking water, our new leader wanted to remind us that this American territory is “an island surrounded by water. Big water. Ocean water.”

To add insult to injury, he also tweeted that Puerto Rico is “billions of dollars in debt to Wall St. and the banks which, sadly, must be dealt with.”

This is tantamount to a loan company showing up at a fatal car accident to remind the survivors that there is still a balance on the cars that were just wrecked. It doesn’t really help.

This past weekend, the Pulitzer prize-winning playwright and actor who penned Broadway’s incredible show, “Hamilton,” Lin-Manuel Miranda, was all over the news discussing the brand new song he wrote to help the hurricane relief for Puerto Rico: “Almost Like Praying.”

The celebrities who donated their time and talent to help this become a star-studded song range from Gloria Estefan, Marc Anthony, Jennifer Lopez, Luis Fonsi, Fat Joe, and many others. Actually, 22 stars in all.

It’s somewhat reminiscent of the Michael Jackson and Lionel Ritchie penned “We Are The World,” which went on to raise over $50 million dollars for Ethiopia in 1985. I say “somewhat” because there are some marked and alarming differences.

First of all, Puerto Rico is an American territory that we should not have to be recording benefit songs to help after a major disaster.

This entire year, in fact, has probably been one of the strangest and most unprecedented in United States history with regard to what goes on in Washington, so it feels a little weird to be using terms like “should” when nothing has really been what it should be. I like to look at the positive though—there is always something positive to be found in even the worst of situations.

It is a new world, and perhaps one which we no longer have a government that helps its own people.

While that is not the happiest thought to consider, I was totally heartened by the story of great artists and humanitarians coming together to help raise money for aid—especially when I read that Jennifer Lopez, Gloria Estefan, and many others agreed to donate their talents and time long before they even heard the actual song. This proved to me that we, as people, are beginning to come to a place where we realize we need to start taking care of each other—because we are all we have.

This is a new world we live in—uncharted territory—but it may be that we have reached a place where the greatest celebrities are going to pick up where our political leaders are continually dropping the ball.

Whether it’s Colin Kaepernick and all the others from the NFL who are giving voice to the subjugated and marginalized, or award-winning playwrights raising funds for our neglected brothers and sisters, something is beginning to change for the better around here.

And it is filling me with optimism and hope that we just may get through this thing okay.