3 Simple Things have Helped one man Beat Cancer—& they’re Helping my Dad, Too.

My dad has had cancer—twice.

He developed prostate cancer first, and then three years later, he was diagnosed with bladder cancer. His prostate was removed and he received treatment for the bladder cancer, but the testing and occasional treatments to prevent it from returning are ongoing.

His father died in his mid-40s of colon cancer, and my mom’s dad died of prostrate cancer that turned to bone cancer, so the disease is in my family’s history. Because of this, I often read the stories of people claiming to have beaten cancer in all of its various forms, and sometimes—because I’m a writer—I get so stoked by what I read that I contact the people to ask questions.

And that’s how I came across Paul Kraus, and his remarkable story that claims that diet change, meditation, gratitude, and self-discipline saved his life. This 72-year-old Australian is the world’s longest survivor with mesothelioma, a rare cancer that affects the protective lining around important organs like the lungs. Caused by asbestos, it takes 20 to 40 years to develop after exposure, according to The American Cancer Society. Of the 3,000 new cases diagnosed each year, only 40 percent of the patients survive more than 12 months, with only 20 percent surviving more than two years.

So I emailed Paul Kraus for an interview.

Kraus, a Holocaust survivor who was born at a Nazi labor camp, worked at an asbestos factory during one summer break during his undergraduate education. Decades later, in 1997, he was diagnosed with mesothelioma and given only weeks to live. He emailed me that he and his wife “accepted the diagnosis but rejected the prognosis,” and that after thoroughly researching the illness, they immediately began other complementary therapies, overseen by a holistic doctor.

Kraus said they adopted a multifaceted approach that incorporated his mind, body, and spirit, as he knew that would be essential to survival. He radically changed his diet and became a vegetarian, and cut out all fried and grilled foods, dairy, and sugar. “I ate primarily raw foods,” he says. “I ate whole foods. I lost weight and felt reasonably energetic.” He also invested in an excellent juicer and drank four to five juices each day, something he has been doing daily now for more than 20 years.

Juicing is easy to incorporate into a diet, so I started my dad on it one weekend a couple of years ago when I came to visit. He and my mom have been throwing spinach and apples and carrots and all kinds of whole foods into a blender daily ever since.

Both the American Cancer Society and the American Institute for Cancer Research have published studies on the benefits of a plant-based diet that’s low in refined grains and sugars and low in red and processed meats. A study in the British Journal of Cancer looked at the connection between diet and breast, colorectal, and prostate cancer survivorship and also found that this type of diet contributed to longevity.

Kraus says he also learned to let things go by meditating. “Meditation taught me an entirely new way of living,” he says, “not just for myself, but seeing myself as part of God’s creation. Cancer helped me deal with my ego; that is the enemy of so many people.” Kraus also says meditation was a powerful tool in dealing with “only just satisfactory blood test results and mediocre scans” as doctors monitored his illness.

Along with that point came Kraus’ next one: developing an attitude of gratitude. Every day he starts the day thankful that he woke up and feels great, despite times when the news from his doctors isn’t favorable. Kraus says, “I look back on the past 20 years with thankfulness that I was given a diagnosis that has greatly improved my life.”

That’s how my dad feels, too.

The National Center for Complementary and Integrative Medicine has published extensively on the effects of meditation on the brain and on a number of health conditions. And Roswell Park Cancer Institute offers workshops in meditation for cancer patients and cites a Canadian study that says, “researchers found that the telomeres—the protein caps at the end of chromosomes that determine how quickly a cell ages—stayed the same length in cancer survivors who meditated or took part in support groups over the three-month period. On the other hand, the telomeres of a control group of cancer survivors who didn’t participate in these groups, shortened during the three-month study. Shortened telomeres are associated with several disease states, as well as cell aging, while longer telomeres are thought to be protective against disease.”

To help others learn to think positively despite any diagnoses, Kraus has written a book titled Surviving Mesothelioma and Other Cancers: A Patient’s Guide, which he offers on his website free of charge to others who have been diagnosed with cancer. He says he does this so that others realize they don’t have to become a statistic. He acknowledges that every person’s cancer is unique and that roads to healing will be individual, but if “we incorporate the mind and body and spirit into the treatment, we will find fulfillment.”

And certain basic rules, especially in regards to diet, nutrition, and attitude, Kraus says, apply to everyone.

He encourages people who receive a cancer diagnosis to realize “that whatever medical advice they receive, faith, love, laughter, and hope—which is physiologic—are all there to help you each day, and support groups can also help you maintain your equilibrium.” He’s grateful to the support group that he and his wife are a part of, and he’s excited to watch his grandchildren grow up and to experience their love and laughter.

“Cancer has ironically enhanced my life to no end,” he says.

My dad has adopted some of Kraus’ approaches to life and wellness. He wakes up every day grateful for his life and finds time to be with me, my brother, and my mom, and to laugh and live with us. He spends time with my brother’s kids when he can, even though they live in separate states.

We’ve all learned to be mindful of each moment, and to be grateful for each experience and diagnosis as they provide room for us to grow and reminders to speak to those around us.

None of this is to say that these things can miraculously cure cancer, but they sure have helped me, my father, and others. May it be of benefit. 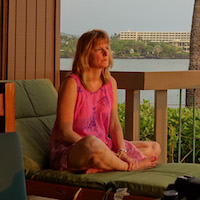