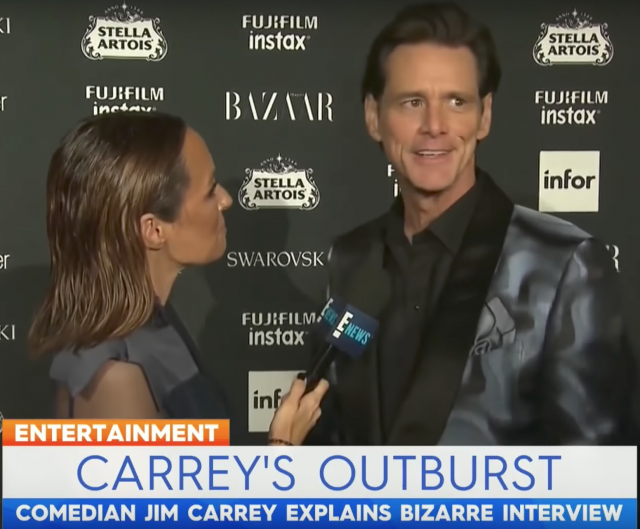 Every once in awhile, someone sitting on the throne of celebrity stardom steps outside the box of modern, consumer culture to speak some truth for all of us to hear.

The past few weeks, that person has been Jim Carrey.

We never really know what to make of celebrities stepping out of the spiritual closet. Is it a publicity stunt? Is it a manic cry for help? Or is it a genuine attempt to convey some deeper truth after a near-lifetime enduring the illusions of fame?

It’s never obvious what is really happening in cases like these.

There is something so incredibly egotistical and self-aggrandizing about the entertainment industry that it puts a tremendous strain on one’s consciousness to be at the center of it all. I certainly cannot speak to the experience of celebrity spotlight, but what I can say is that I know it surely puts an immense amount of pressure on the psyche to be the face of such a distorted field of human life.

The entire industry puts such an emphasis on image. As an A-list actor, you are really acting as the embodiment of that image. You are the image people cling to, and this surely creates a hugely inflated sense of self. The ego becomes everything—and oftentimes, as a means of survival, we must fall away from this limited sense of identity to tap into the deeper elements of our own nature.

The best way to understand the apparent spiritual transformation of Jim Carrey is to look at some of the things he has said while all of this has been unfolding. From there, we can determine for ourselves whether it is genuine or complete nonsense. He’s said:

“As an actor, you play characters, and then if you go deep enough into those characters, you realize that your own character is pretty thin to begin with. Suddenly you have this separation and go, ‘Who’s Jim Carrey? Oh yeah, he doesn’t exist.’ There’s just a relative manifestation of consciousness appearing, and then somebody gave him a bunch of ideas; a name, a religion, and a nationality, and he clustered those together into something that is supposed to be a personality.”

What he seems to be referring to is the illusory nature of the ego—the fleeting and illusive quality of having a conceptualized sense of self.

Ultimately, we are just pure expressions of consciousness interacting with the world, but somewhere along the line, we began to identify with the various forms that were designated to us by whatever culture we happened to be brought up in.

It is necessary to have a cultural identity, but what is perhaps unnecessary is to give all importance to that particular identity and to try and pretend that it encompasses who we are at the depths of our being. Carrey continues:

“I believe that I got famous so that I could let go of fame. It’s still happening, but not with me. Dressing happens, hair happens, interviewing happens, and it happens without me. Without the idea of me. There’s just what’s happening, and it’s not personal. The difference between money and ‘my money’ is a gigantic chasm. It feels like things are just happening, and they are going to happen whether or not I attach myself to it or not.”

He seems to be alluding to a recognition of the difference between what we are and what we think about ourselves.

It is all happening, and we are a part of it. We are not part of it as a separate entity—a “me”—but as an active participant. We are conscious agents engaged in the play of the universe.

When we let go of the tight grasp we have on our own self-image—when we take a step back from our particular identity—we actually feel more connected within ourselves. It somehow gives our consciousness the freedom to flow and express itself however it wants to, and this feels really good. In Carrey’s words:

“I want to relate what this is to people so that maybe they can also glimpse the abyss. It sounds scary, but it’s not. There’s gratitude. There’s wonder. There’s excitement. And it’s all rising out of nowhere and happening for no one.”

I really enjoy hearing stories like these. It reminds me that it is indeed possible to wake up from our collective slumber. If someone who has seemingly won the game of modern culture, like a popular actor, can see the absolute absurdity and hypocrisy of the whole system, perhaps there is some hope for us after all.

Maybe we are beginning to wake up. Maybe all the chaos we seem to be entrenched in at the moment—from Trump, to mass shootings, to environmental catastrophe, so on, and so forth—are signs that we are in a transition. We are on the precipice of great change.

If we are to rightly navigate this change in any way, I think a good place to start would be to take Mr. Carrey’s advice.

It is all happening, and none of it is personal. If we can detach ourselves from ego—from this false sense that everything that happens is really happening “to us”—we then come to live more fully in the present moment. We awaken our true nature as boundless and dynamic movements of consciousness. It is here we find ourselves most capable of experiencing love.