6 Secrets from the Hunzas for a Long & Healthy Life. 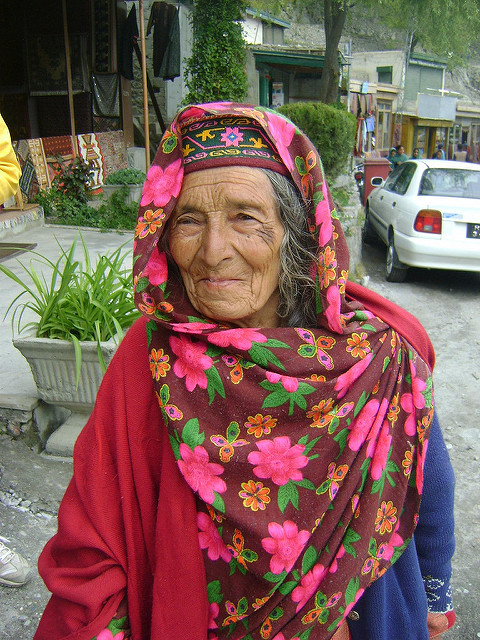 We are living longer today than ever before, but we are also spending more time dying.

Statistics show we are living longer, in large part thanks to decreased infant mortality rates, but we are also spending longer times in the hospitals before we die. Half of Americans age 65 or older have one or more chronic diseases costing taxpayers more than a trillion dollars a year in medical care.

My great grandfather in Norway, however, who lived until he was 99 years old, only went to the hospital once, when he was 75. A hobby herbalist, he lived a healthy life and took care of himself until the day he dropped dead of a heart attack.

Years later, when I read about the long-living Hunza people in Pakistan, I thought of him in his late 80s: thin and wiry, but with the energy of someone 30 years younger, he taught me how to chop wood with an axe.

My great grandfather would have loved the Hunza lifestyle. He would have fit right in with these sturdy mountain people in the Himalayas, where they commonly live healthy lives into their 90s without any chronic diseases.

In November, 1921, English physician, Sir Robert McCarrison, after visiting the Hunza valley, came to the United States and delivered a lecture titled “Faulty Food in Relation to Gastro-Intestinal Disorders.”

Dr. McCarrison’s lecture’s most salient points centered on the marvelous health, vibrancy, and longevity of the Hunzas, who, along with the Abkhasians of Russia and the people in the so-called Blue Zones (Sardinia, Loma Linda, Okinawa, Nicoia), seem to know the secrets to the fountain of youth and happiness.

And what is their secret?

Their diet, Dr. McCarrison found out, plays perhaps the most important part in not developing chronic and debilitating diseases such as cancer, heart disease, and diabetes as they age. These diseases are, in contrast, the three main causes of death in the Western world today.

To make his point in scientific terms, McCarrison carried out an ingenious series of experiments with albino rats at Coonoor in 1927, in which he fed them the diet upon which the Hunzakuts and other healthy peoples of Northern India subsist.

Another group of rats were fed the nutritionally poorer diets of white rice, stir and deep-fried vegetables, and sugar eaten by the Southern Indians, the Bengalis, and Madrassis. A third group of rats was subjected to the diet of the lower classes of England—white bread, margarine, sweetened tea, a little boiled milk, cabbage and potatoes, tinned meats, and jam.

The results were nothing short of revolutionary. McCarrison described the first group of Hunzakut rats as follows:

“During the past two and a quarter years,” he stated, “there has been no case of illness in this ‘universe’ of albino rats, no death from natural causes in the adult stock, and but for a few accidental deaths, no infantile mortality. Both clinically and at post-mortem examination this stock has been shown to be remarkably free from disease.

The Bengali group of rats on the other hand suffered from a wide variety of diseases which involved every organ of the body such as the nose, eyes, ears, heart, stomach, lungs, bladder, kidneys, intestines, the blood, glands, nerves and reproductive organs. In addition, they suffered from loss of hair, malformed and crooked spines, poor teeth, ulcers, boils and became vicious and irritable.”

The third group, the English rats, developed similar diseases as the Bengali group of rats. They were also nervous and tended to bite their attendants, and by the sixtieth day of the experiment, they began to kill and eat the weaker rats in the flock.

So what are the main specialties of the Hunza diet and lifestyle? There are six in all:

1. They eat a diet high in complex carbohydrates but low in calories—about 1,600 to 1,800 calories a day, as opposed to most Americans who eat between 2,500 to 3,000 calories a day, mostly from refined carbs and sugar.

2. They eat some kind of probiotic food every day—either in the form of kefir or fermented vegetables.

3. Apart from the Okinawans, whose diet consists of about 15 to 20 percent fish, these youthful elders eat mostly plants, not too much, and they eat meat or fish only on rare occasions, sometimes as little as once a month.

4. Their protein intake, which mostly comes from plant sources, is rather low, between 20 and 50 grams a day.

In addition to these dietary habits, these healthy centenarians also have strong social bonds, exercise moderately (manual work, walking), don’t smoke, and drink moderately, or drink no alcohol at all.

Today, we know that the main causes of heart disease, cancer, and diabetes can be found in the Western diet or the Standard American Diet (the SAD diet), which consists of large amounts of refined carbohydrates, sugar, animal fat, and hydrogenated vegetable oils—all ingredients that are absent in the longevity diet. The SAD diet, in other words, is pretty much the exact opposite of the Hunza diet.

For a few years, in my 40s, I lived on a vegetarian version of the SAD diet: lots of bread, cream cheese, pastries, and vegetarian pizza. It did not go well. I gained weight. I had frequent urinary tract issues and eventually, I was diagnosed with prostatitis, inflammation of the prostate. Western medicine did not help at all. In fact, millions of U.S. men suffer from chronic prostatitis today. And most of them are on various forms of modern medicines.

What actually helped me was a change in my diet. But first, I did a long green juice fast to cleanse and heal. After that, I cut out the refined grains (the bagels and the pizzas), since these refined flours also turn into sugar and often create candida, a bacterial imbalance in the digestive system, as well as inflammation. Candida and inflammation turned out to be the underlying causes of my prostatitis, as well as stress, which also affects the digestive system in many negative ways.

It was both during and after that period of pain and suffering that I studied Ayurveda and naturopathy. I also learned about the Hunza lifestyle. Interestingly, the Hunza diet is very similar to the diets prescribed by today’s experts on nutritional science. And it’s also the one prescribed by Ayurveda.

Today, I work at a wellness center teaching people that lifestyle is our best medicine. Even herbs often only treat the symptoms of our disease, but when we change our eating habits and the way we live, we can change the underlying cause of most of our health problems.

We are living in interesting times. We have entered an era in which new science meets or confirms the practices and lifestyle of the ancients—the yogis, the indigenous Hunzas, and the Okinawans.

This meeting of old and new wisdom confirms that a diet rich in fruits and vegetables and low in meat and sugar is the best for health and longevity. We have also learned that this diet is also much better for the environment as it uses much less land and energy (water, fuel, and fertilizer) to produce.

Dr. Dean Ornish—whose “spectrum” diet and lifestyle has a 99 percent success rate in treating heart disease without drugs and scalpel, prescribes a diet to his heart patients that is similar to the Hunza diet.

This diet is also similar to the vegan or vegetarian diet promoted by Dr. Joel Fuhrman, whose scientific research has confirmed that longevity and vibrant health is effectively promoted on a diet with lots of raw and cooked plant-based foods. Moreover, the Hunza diet also echoes the now famous motto promoted by popular food writer Michael Pollan: “Eat food, mostly plants, not too much.”

Indeed, these seven words, which also pretty much sums up the Hunza lifestyle and food philosophy, also tell us everything we really need to know about living long and healthy—well into our 90s—without visiting doctors or the hospital.