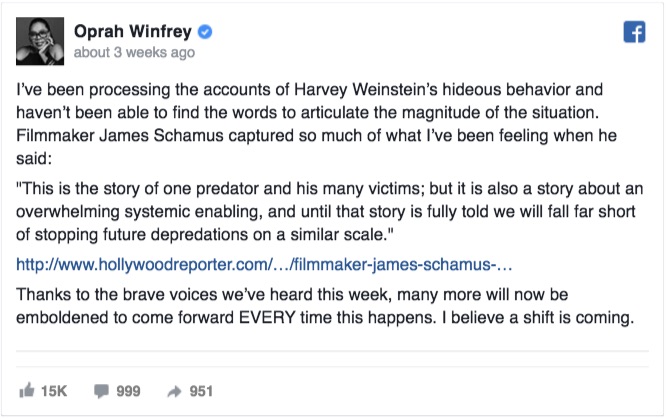 It isn’t just about Harvey Weinstein.

Sexual harassment seems to be woven into our humanity.

In every culture, in every neighborhood, in every country. It’s not just a 21st century thing; it’s been ingrained in our humanity for thousands of years.

Unable to sleep because of the sudden heat wave in San Diego, I’m scrolling through YouTube videos at 5 a.m. and stumble upon a CBS Morning Show interview with Oprah. I click because the title reads, “Oprah on Harvey Weinstein Scandal.” My interest is piqued and though exhausted, I perk up. I wanna know what Oprah has to say about it.

I don’t know a single woman who hasn’t dealt with some version of this story:

Ignoring a man’s sexually-infused, inappropriate comments.
Ignoring when a man cups your butt as you walk by, smiling and looking away.
Ignoring when he says he’ll make a business introduction if you go to dinner with him.

We ignore these things because we question if it actually happened and/or because if we say something we worry we won’t get or keep the job.

A few minutes into the interview, Oprah says:

And while, of course, I want that too, I know better. I’m a bit more realistic. Those days aren’t over.

To reverse an issue that’s woven into the culture of the human race after one scandal is like hoping a serial killer will stop killing after victims’ families speak up.

Every day men make inappropriate comments to me related to my appearance or behavior. I’m used to it. It doesn’t matter what I’m wearing or where I am. I can be in a bikini walking my board down to surf; I can be in a winter coat biking to the grocery store. It happens everywhere. Sometimes I’m flattered; I mean, who doesn’t enjoy hearing someone say you’re beautiful. Yet there’s a time and place. And related to business or from strangers when it goes beyond a quick, “You are beautiful,”—that’s not okay.

A year ago, on a Friday night, I drove downtown to see a family friend visiting San Diego for a conference. He told me there would be a ton of business contacts at the hotel, all of whom I could meet as potential clients for my copywriting and editing business. He also said I should come to even out the women-to-men ratio. I ignored that part of the invitation because why should that matter at a business conference. In reality, that was the only reason this family friend invited me.

While in the lobby, chatting with him and his colleague, he started taking photos of my legs and texting them to others—men—from whom he wanted business. He was using a woman’s appearance to bait these men to come hang with us so he could talk shop and sell them on his service. I put my hands over my bare knees and calves and said, “Stop!” followed by a laugh. I laughed because I felt awkward, because I didn’t know what else to do, because I couldn’t believe he, a friend of my family, would do such a ridiculous, inappropriate thing. I laughed because I didn’t want to lose out on my chance to meet these potential new clients. Shame on me for caring more about that than my dignity.

It isn’t just about Harvey Weinstein. Things don’t change just because women have spoken out about their own experiences.

I love men. I respect the male figures in my life; to me, they are some of the greatest people alive. I’ve never been worried my father was going to make inappropriate comments about other women or touch them in ways he shouldn’t. That was the last thing I thought he was capable of. He was just my dad. But I was aware many other men operate this way.

Take the man who helped me with an international trip to write about endangered animals. My 20-year-old self thought his offer was wonderful and professional. He took care of the travel details and prep work. I simply, naively, thought this is what a mentor should do.

Then, a week into the trip, he walked into my bungalow with a bottle of lotion and offered a leg massage. My muscles were super sore after days of bushwhacking through miles and miles of dense forest to see the gorillas. I hesitantly said okay, and then, sitting upright, on edge, I watched him massage my legs. He was 55 years old. He was my superior, and I didn’t know what to say to get out of it and not ruin the work relationship.

I didn’t want to rock the boat. He had made me feel so special. He bought me gear. He chose me for this opportunity. He was in charge. I was the student. He took advantage.

So I allowed him to massage me for about 10 minutes before saying, with a fake yawn, “I’m super tired. I need to get to bed. Thank you! See you in the morning.”

For the next few days before we flew back to the States, he was dismissive. A month later, when I turned in my report for the internship, he criticized my work to my professor. My professor, a male in his 40s, knew exactly what was going on, and said, “Sabrina, do not worry about a thing. The report was well written.”

These situations shape us. They dictate ways we interact with future employers and business contacts. We’re preconditioned to expect these things, to think they’re okay.

To see change, we, as women, must become comfortable in our power.

That’s a lesson in self-confidence and empowerment. No matter how confident we may be, setting clear boundaries and not accepting this kind of behavior is very difficult to do. We are conditioned from a very young age that to get ahead in life you do not stir the pot. You use your sexuality to get what you want. You look pretty and outsmart them. In the same breath, men don’t just stop behaving this way. They have been trained, either directly or through observation.

So how can we better teach our daughters to equip themselves and voice their concerns and state the obvious when a man is being sexually inappropriate?

How can we better teach our sons to not equate women as only sexual objects?

How can we truly change the dynamic between men and women so the Harvey Weinsteins of the world don’t continue to perpetuate this behavior?

Because again, it isn’t just about Harvey Weinstein. 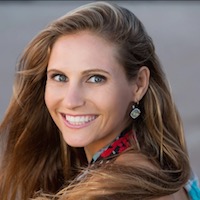