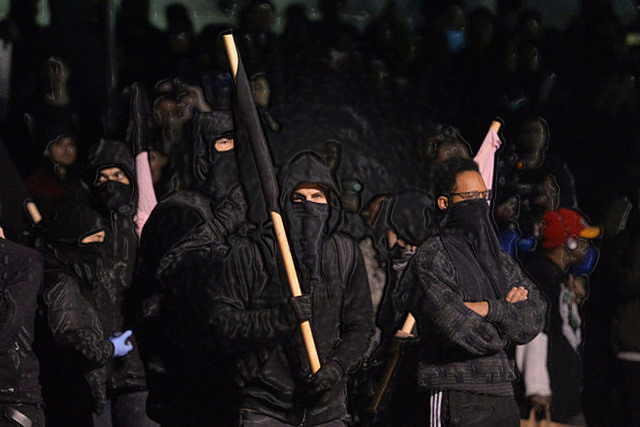 The movement to stop Donald Trump faces three great challenges, any one of which could lead to failure. The passivity of the soft-left, the corruption of the center-left, and the aggression of the hard-left each threaten to undermine the movement in their own ways. But each can be overcome through good strategy, intelligent action, and simply keeping calm.

The passivity of the soft-left has its roots in the spiritual ideals unleashed by the sixties, which encouraged us to abandon reason in favor of a spiritual communion that would magically set things right. Soft-left ideals are responsible for the emergence of the environmental and health food movements and have often been inspired by deep spiritual practice. They tend to counsel us to empathize with and better understand the needs of political opponents in order to find win-win solutions. But in this case, it is a highly aggressive and racist right, which is simply not listening and does not care what we think; if we take this path, we will get walked all over.

The corruption of the center-left has its roots in a campaign finance system that requires even the best of progressive candidates to cater to the interests of wealthy donors. Center-left ideals are gradualist and have been responsible for many of the incremental gains of the Democratic Party over the last generation. But they would have us manipulate broken institutions to press discredited programs set forth by untrusted politicians. And this helped us get Trump in the first place, for it tarred Democrats with everything that is wrong with America today. If we take this path, we may win elections even as we lose momentum, amid the Trump administration hollowing out checks and balances and ignoring court rulings in a slow motion coup that could destroy American democracy forever.

But it is the aggression of the hard-left that may be the most dangerous now.

The aggression of the hard-left has its roots in a cynicism that has been exacerbated by inequality and the breakdown of democratic institutions. The hard-left is responsible for exposing many of the social injustices that have plagued American society since its inception, and they are usually at the forefront of the efforts to stop needless wars.

But their mistrust of highly constrained political leaders and their feeling of besiegement can lead to the urge to tear it all down. Hard-left ideals counsel us to make impossible demands because they are the right thing to do, even when the result will likely be disastrous. The hard-left has a strong tendency to vote third party, but unlike the soft-left which often does so as well, the hard-left tends to savage Democratic Party candidates, exaggerating their similarities with Republicans, and thereby sabotaging their chances of winning an election.

But the greater danger of the hard-left lies in its willingness to tolerate aggression against opponents when it is the other side (the far right) which possesses the majority of all the weapons, and when the police and the military might well join the fascists if forced to take sides. Over the years, I have watched anarchists face off against police officers who were peaceably separating protesters from traffic, taunting them and shouting abuse. I have watched countless videos of them destroying property, which surveys repeatedly show Americans equate with violence. And while I have heard many on the left who have wanted to distance themselves from this behavior, I have seldom if ever heard anyone who was willing to ask them to stay away from their protests.

But this kind of thing can now get people killed. Seldom have the men with guns in developed democracies been leftists and liberals. More often than not, they have been hunters and police officers, rednecks and ex-servicemen. Meanwhile, minority gangsters and anarchists lack the discipline, firepower, training, and aim needed to win in a civil war. Yes, civil war. This is what we are talking about when our blood starts pumping over violence against fascists, so we might as well think a little about our prospects of winning. While enthusiasm over the prospect is quite rare, open expressions of aggression on either side, like Trump and Kim Jong Un taunting each other, could easily spiral into war. And if it comes to civil war, liberals are almost certain to be destroyed.

Few liberals express much interest in murdering their fellow citizens, but conservative talk show hosts like Alex Jones occasionally speak openly about killing us all. American conservatives are generally more comfortable with fighting unto death; hence, the support for most major wars. And there is little that is more stupid than provoking a fight with a bigger, stronger, more aggressive bully—especially when they are openly relishing your death.

Indulging the violent fantasies of anarchists and anti-racist street fighters is stupid and gutless. It is stupid, because it could empower them to engage in a fight which will draw in liberals everywhere, and which we are sure to lose. And it is gutless, because while the consequences would be so devastating, the easiest course is to be understanding of their frustrations. After all, the people most ready to fight are usually either working hard to stop Trump or else the victims of racism.

But it does not matter that the people advocating violence are a minuscule minority on the hard-left. And it does not matter here that few white people can really understand what it is like to be a vulnerable minority in a racist society. It only takes a spark to get a fire going, and it is the minorities who would be the greatest victims of a mass conflagration lit by racists. And most members of minority groups know this well—far better than the white-leftist activists who are cowed into mimicking the lines of their most extreme anti-fascist allies.

The Women’s March, which occurred shortly after Trump’s election, is perhaps the best example of what this might look like. It was bold and beautiful, vigorous and sane. It found a place for everyone, affirmed the highest liberal values, and eschewed violence. It was easy to imagine it sweeping the country when things really got bad, and it looked like the start of a winning campaign.

The Trump administration will fall apart like a house of sand in the wind if we can succeed in simply channeling the opposition to his programs in such a vigorous and positive direction. It will require that we avoid the worst excesses of our own political subcultures, while joining together in a united front; and it will require constraining our own and our allies’ most reactive impulses and being realistic about what we can achieve.

It is quite possible Trump will set in motion the institutional degeneration that will destroy American democracy forever. But it is just as possible that he will prove the greatest boon to a vigorous and united movement to restore American democratic institutions in generations. The future is largely in our hands and dependent on the best intuitions of our hearts and minds.