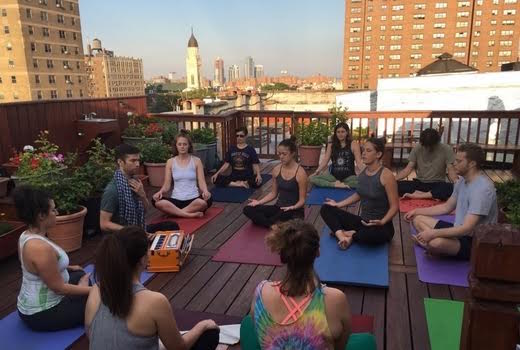 Those Hare Krishnas in the Big Apple: A Skeptic’s Tale.

People barely look you in the eyes in New York City. They’re trained to avoid it, either by toying with their iPhones or noticing something flashier. The subtext is: anywhere but here, anyone but you.

Unsurprisingly, loneliness has weaseled into my life. It manifests as a sense of fumbling through the day and needing to muster up energy to do anything. I’ve grown increasingly isolated, spending days in my pajamas, staring down at my toes and cursing the unreasonable price of a pedicure. The beginning of the year has been a series of weeks marked by strange body odors and the gnawing realization that N.Y.C. had turned out to be a worthy adversary.

Call it mind reading or call it intuition, but somehow, a friend of mine picked up on these vibes. She reached out to me and asked if I’d join her for a Bhakti kirtan. I knew very little about kirtan, only that it was vaguely linked to bald Hare Krishnas who I suspected bathed in patchouli. But perhaps a deeper part of me wondered what kept them so damn happy. Why did they chant every day?

So I told myself that I would approach the kirtan evening with an open mind, in that investigative journalist sort of way. I accepted my friend’s invitation.

On Thursday night, we entered The Bhakti Center and were greeted by three smiling “Bhaktinis.” One of them offered me a cookie on a white napkin.

“Thank you,” I said, and walked over to the front desk to pay.

“That’s sweet,” said the receptionist, “but kirtan is free.”

Free? Nothing was free in New York.

Still processing my confusion, I climbed the first flight of stairs. A woman took our coats and lined up our shoes with great reverence. She directed us toward the final flight of stairs, which led to a row of food warmers lined up in the hallway.

This was free, too? I thought. I didn’t understand; I didn’t earn any of this.

We reached the Radha Krishna temple, which smelled of feet—not especially smelly feet, but the odor of fatigue that marks people who walk the streets of New York City. There was a woman sitting in lotus, a college kid in dreadlocks, a man in a tunic, and then there was me.

At least I looked the part. I wore a red embroidered skirt with a cherry quartz mala. Quietly, I sat cross-legged, sandwiched between strangers. The people began chanting the same words, over and over. I closed my eyes like they did and tried to copy their sounds.

Kirtan is the singing of mantras or prayers, often accompanied by rhythmic drumming. Singers can invoke any deity they wish, but The Bhakti Center focuses on Krishna, the eighth avatar of Vishnu (don’t get me started on the complexity of Hinduism).

Conceptually, kirtan is pretty simple: listen and repeat. The musician creates a melody with the lyrics “Hare Krishna, Hare Hare, Hare Rama, Hare Hare,” and the group responds in an identical fashion. I liked the feeling of singing with people, seeing as my theater career faded after the last high school performance of “Grease.”

As the volume grew louder, the temple swelled with energy. A man started dancing around me while a woman fist-pumped the air. A stranger shouted off-key and a toddler ran in circles. I looked around and wondered what we were building toward, why there seemed a sudden urge to chant toward some collective climax.

Did it matter what we were chanting? Probably not. We could’ve been shouting “pizza” for all I know, and it might have had the same effect. It was like no one really cared how we sang, only that we kept going.

It was then that my knee bumped against a stranger’s knee. I flinched—skin contact being the supreme invasion of personal space—but the woman remained composed. I clenched my hip flexors, ensuring that my knee remained elevated above hers. But after a minute or so of this, my body fatigued, and I realized I had two options: sit uncomfortably tense for the next hour, or surrender my knee against hers.

So I decided to let go.

The woman turned to me and smiled. I returned the smile, a tacit “thank you for letting me rest my knee against yours” successfully conveyed.

But something happened that night that I did not expect: I started to remember the feeling of community. I realized that a separation had occurred, quite unconsciously, between my communing self and the isolated person I had become. I had chosen to abandon people because New York City had abandoned me—and by making that choice, I divorced myself from the chaotic mess of human beings.

The city had tricked me into thinking that people are all the same—that everyone is self-absorbed and indifferent to the suffering of others. But when I looked around the room that night, nothing could have been further from the truth. Those smelly, worn out feet were my feet; that loud, dissonant voice was my voice; and these strangers in the room were people who did care and who did believe a joyful climax was coming. That’s why they returned. That’s why they kept chanting.

It took me over a hundred “Hare Krishnas” to remember that I’m not alone. And as we chanted in unison, I quietly recalled that we’re all in this together—whatever “this” is.

Kirtan Anyone? The Transforming Power of Sacred Sound. 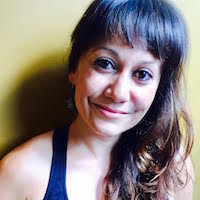