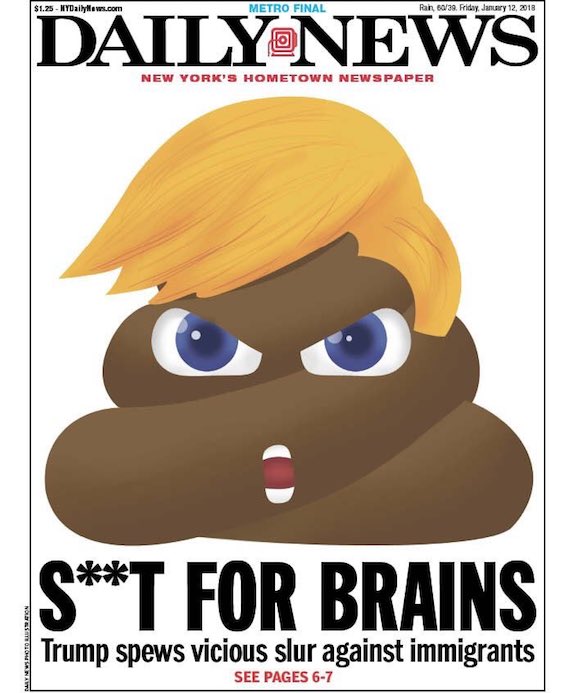 *Eleditor’s note: Elephant is a diverse community of nine million readers and hundreds of writers (you can write too!). We are reader-created. Many blogs here are experience, opinion, and not fact or The One Right Point of View. We welcome all points of view, especially when offered with more sources and less invective, more frankness and less PR. Dislike this Op-Ed or opinion? Share your own take here.
~

I’ve traveled to over 40 countries on this planet and have lived in five.

The only sh*thole is Donald Trump’s mouth. His racist comments that African, Central American, and Caribbean nations are sh*tholes should disturb everyone.

On behalf of the United States, my deepest apologies to our allies and friends who live, work, fight, and struggle in over 120 countries on Earth for the cause of freedom and democracy. And for the 60 countries who serve as our military allies, including some of the countries Trump refers to as sh*tholes, I’ll be surprised if they keep dying for our ignorance.

For those of us who have served in the military, intelligence, or in pubic service, it’s impossible not to be appalled as the racist, Donald J. Trump, undermines our nation as a beacon of hope.

It saddens me, deeply, to know people from foreign nations who have literally died fighting to defend American ideals alongside Americans, even when Americans have killed people in their nations. Some who have died are from the countries Trump referred to as sh*tholes.

For example, nearly every African country on the continent fought alongside the U.S. in World War II—most joining the allies after the attack on Pearl Harbor. In turn, Haitian-Americans have fought alongside Americans since the Revolutionary War, and again in wars thereafter, despite the fact that we have invaded Haiti and occupied their nation between 1915 and 1934, again in 1994 and 1995, and then decided to overthrow their elected government in 2004 as we undemocratically bank rolled a coup d’état and forcibly removed Jean-Bertrand Aristide.

Mr. Trump’s actions are even worse when one has knowledge of the many ways in which American interests have exploited the weak and poor abroad—and here in America—for the benefit of plutocrats like Trump.

To have such an ignorant and vapid President of the United States brings shame to all of us in ways most Americans may not even understand. It undermines our interests, our allied alliances, and our national security. It undermines everything America has ever stood for to Americans, and to the world. It undermines who we are collectively as a nation.

We are a nation of immigrants of hope and freedom that others long and suffer for as they struggle against oppressive regimes that repress the human spirit as Trump and his sycophants attempt to do today.

It would behoove us as Americans to be humble and grateful for the freedoms, privileges, and the Constitutional rights that others have not been afforded.

I encourage everyone to vote in 2018 and 2020 to expel Republicans from power and all those who stand idly by as Mr. Trump wreaks havoc on our democratic institutions, culture, and society.

Get involved in a local campaign now; the defense of democratic values and change begins with us.

Our privileges won’t last forever. Freedom is fragile—defend it, or we may go the way of Rome.