How “Faith-Based Yoga” Saved me while Grieving my Child. 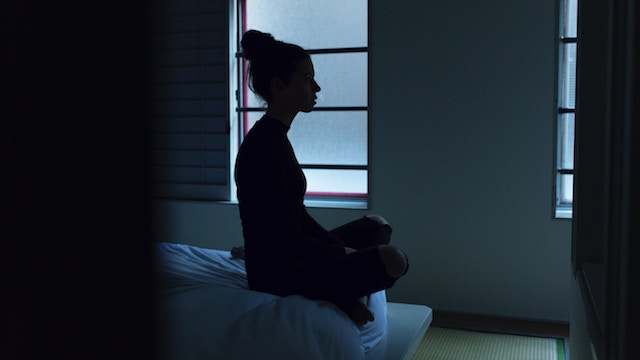 Staring death in the eye, there is nowhere to run except home—the home of your very own beating heart.

This is one thing I learned when I first saw my daughter, who lay near death in an emergency room, hooked up to spider-like machines that seemed to suck the life out of her every fleeting pore, as I thought I saw her soul hover above her body and mine.

“But at least she is alive,” someone murmured low in the cold foreground of the hospital, a horrifying reality of cold, suffocating walls that felt more like a shrinking airless tomb. “And that is all that matters right now,” the voice continued, even lower and stranger than before.

Were we both dead? I wondered, as I could not recognize the pale glow of her once pink skin, usually flushed from too much laughter and the limitless tenacity of the Southern California sun. And her long blonde hair, where did it go? Where were the long, wild, and loose strands she had carried and swayed along with since she was a little girl? Now her head was bald, swollen, and was pricked by needled tubes and wires that somehow promised to keep her alive.

Reaching for the nearest wall with my right hand, I would not allow myself to collapse, as a round priest edged his way slowly into the room, as if floating in midair, crossing his heart, and kissing strands of a thousand black rosary beads. He said to me, “We can be at peace knowing she is loved,” as his grey eyes shut, allowing a tear to trickle down his soft face.

Family members came in, one by one, barely steadying themselves as they saw her, managing a yelp or two, and then glancing over at me with absolute sorrow and pity. But as her mother, I had no time to be sad as I had so very much work to do to make her well. I had to be strong for both of us; I had to feel nothing but strength and optimism, and even though she couldn’t open her brown, doe-shaped eyes, I had to keep a stiff upper lip and own a gentle face, as I knew she could still see me as a “spirit mother.”

I know that others looked at being “in denial” as being perhaps insane and completely out of touch with reality. But as every mother knows, there is no giving up on one’s child—no matter what their state of being is, no matter what anyone tells you, or what scientific prognosis an impossibly young, childless doctor tells you.

Suddenly I seemed to have the strength of a gentle Buddhist goddess as I walked in slow motion toward my daughter at the back of the cold room. Every prayer and practice of meditation and hope I had ever practiced seemed to rise to the top of my head like a crown of acceptance and like a weightless aura of serenity.

On that first life-altering day, of what I now call “The Gift of Acceptance” of my daughter’s physical realm and state, I felt a sudden and deep, sturdy rooting of my feet to the floor, like a very old stubborn grandfather tree forgotten much too long ago in an overgrown war-torn forest. And with each new piece of nightmarish information from a faceless neurosurgeon, and as each crying face from a relative wilted like old stilted water before my eyes, my hearty stance only grew stronger still. A surge of motherly electricity grew like a pulsing vine, and the very earth itself shot through my veins.

I was in mountain pose, I realized, after a nurse asked me how long I could possibly stand motionless, praying silently as she offered me a green vinyl chair for comfort. And in the long hallway as I paced during a third surgery done on my daughter’s brain, I must have embraced a sun salutation that lasted seven hours, or so it seemed.

Yoga is what helped me to not only survive my daughter’s near-death accident, and in turn, my own near-death experience, but it’s also what I believed helped us both to heal better via a natural meditative state that arose from sheer necessity, desire, and faith. Unknowingly, the poses I had been practicing for two years had become first-nature, and kicked in full force like much needed breast milk for a newborn baby suddenly and miraculously arrives just in time.

Somewhere inside me, each meditation I had ever practiced surfaced to the top of my being and through my daughter, ready and available to nurture both of our souls and heart-center as each operation was performed, and as each friend or family looked at me in utter despair.

When I finally passed out from lack of sleep on day four or five after being told about her horrific accident, I awoke to find myself in corpse pose indeed, but with my hands outstretched as if I were ready to fly. How I had made it to a bed I cannot remember, as all of the days seemed like a cold and foreign television show with me as its reluctant co-star.

The linens were warm, I thought, and my hands could move up and around. My boyfriend said I had been sleeping for eight hours, and that I had held my hands in a prayer pose the entire time.

Slowly, I arose, even though I was feeling guilty that I could sit up while my daughter was in a coma, unable to move. So, I moved “for her,” I thought. I stretched out my arms and then stood up into a warrior pose, seemingly drifting in air and yet on the most solid of ground at the same time.

With intent, I prayed for her and then did a series of yoga poses that I always had trouble with in the past. Pigeon pose seemed effortless to me now, as was a headstand, and even the splits. Was my body more flexible? Were my limbs more agile? Had I suddenly turned into an Olympic gymnast or a Hindu yogi? Did my Japanese Buddhist mother’s past finally overtake me?

I believe it was faith in my daughter getting well, which allowed me to surrender all of my former fears that once showed themselves in my body. Every move now seemed weightless, and my very priorities of being aligned themselves in a perfect cacophony of spirits, each one a little more persuasive than the one before.

It has been two and a half years now since the day my eldest daughter fell from a third-floor fire escape to an asphalt ground that pummeled her young body. The day that I did, in fact, get that much dreaded 3 a.m. phone call was the day when I was truly born to be the person I was always meant to be.

And who was this? It was not as if I had been terrible before her accident. It was not that I had abused others, had stolen anyone’s self-worth, or had been a loveless daughter, sister, or mother. But I had been living on the cusp of a surface life, without allowing myself to truly feel what was worth feeling or understanding.

As my daughter and I continue our healing process, we are most thankful that we are alive enough still “to be thankful.” My sweet daughter Jasmine now lives in a rehab facility full time, unable to walk, eat by herself, or work at her career of being a stylist and full-time heartbreaker in Los Angeles.

She cannot hold her iPhone by herself, she cannot Instagram, she cannot post each new improvement to her brain on Facebook, and she cannot dance the salsa or the hula like she did in Hawaii just a few years before.

She also cannot seem to cry or gossip, yell or complain, or ever look at me with anything but a genuine smile on her entire face—one that is both beautiful and haunting. And she laughs a lot, even at all of my silly and harmless jokes about the medical staff when I visit her.

Last week she attempted to do a sun salutation with me using only her right arm. I told her that she was beautiful and that she was my hero. I was not lying. She gave me a thumbs up and drew an imaginary heart in the air with the only limb that can.

Now I know why I have been given the gift of motherhood, and I believe that yoga, meditation, and prayer have nourished my capacity for love.

My prayer for all three of my daughters is that they know how much they are loved unconditionally, no matter what form their body or minds take on, because their hearts will always be full of my love for them.