How the Universe Cured my Political Anxiety. 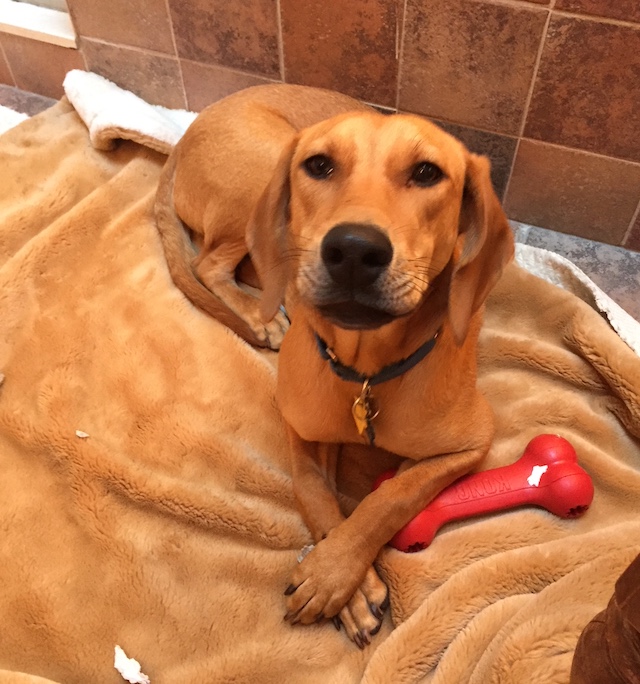 “Dogs have a way of finding the people who need them, filling an emptiness we don’t even know we have.” ~ Thorn Jones
~

It was January 20, 2017. The day of President Trump’s inauguration.

Facebook was on fire with dissent, dismay, and despair. It also was full of happiness, optimism, and elation. Approximately half the former and half the latter.

I was stunned with all that had occurred, and unable to comment about it anywhere. Many of my friends had voted differently than I had—or hadn’t voted at all. How had this happened? How could people I love and respect make such different and opposing decisions?

I felt hopeless, like no action I could take would make a difference.

Anxious and unsure, I distracted myself by scrolling through Facebook. I saw joyful posts supportive of the new regime and gloomy posts that weren’t. And then a small cartoon came across my news feed. It showed a woman crouching down with open arms toward a small puppy behind a wire fence. The accompanying quote said:

“Not all of us can do great things. But we can do small things with great love.” ~ Mother Teresa

I might not be able to do anything about the muck in the world—but I can volunteer to foster a rescue dog.

I replied to my rescue group’s Facebook post looking for fosters for an incoming group of pups. There was one left to foster—a 38-pound hound-lab mix named Jax. I love Jax cheese curls—so it seemed like kismet (this is one of my better junk food-related decisions).

When they opened the door to the foster holding room, Jax bounded toward me and put his huge nose in my face. I pulled back, and he put his paw on my arm as if to reassure me. The rescue attendant handed me a crate, leash, and two big bags of food—which seemed excessive. How much could this dog eat? I loaded everything into the car and headed home.

Jax seamlessly integrated into my days. My current dog, an adorable elderly Shih Tzu named Yogi Bear, only liked to sleep and eat. He rarely played, hated laps (although he technically is a lapdog), and only occasionally took a walk longer than a block. But we loved Yogi—he was the perfect first dog for a family long-deprived of walkable pets.

Jax loved to walk and play fetch. He was only happy right next to you or on top of you. Who needs a weighted anxiety blanket when you have a 38-pound lapdog?

I had to get up early to take him on long walks (to wear him out), so I never got a chance to keep up with the news. I was unaware of all the bile surrounding the new administration. I just didn’t have time to notice.

And I was happier and significantly less stressed. Was new dog-induced euphoria unique to me?

I went online to research the benefits of dog ownership on health and anxiety, and found an article from Psychology Today entitled, “Why your dog is good for your health.”

The article sites a study by Lea B. Jennings from 1997 that shows acquiring a dog has the following positive impacts:

>> Dogs provide attention, honest interaction, and reassurance in times of stress.
>> They provide companionship and unconditional love.
>>  They provide feelings of security and allow their owner to focus on something external—which reduces anxiety and stress.

Does this phenomena extend to other types of pets? Yes, it does.

An article by Time magazine “Time,” shared a study of stressed-out adults who were told to pet a rabbit, a turtle, or their toy forms. The toys had no impact on stress. But stroking a living creature, whether hard-shelled or furry, relieved anxiety.

It worked even if the people said they didn’t like animals.

For me, taking care of and loving this new dog had reduced my anxiety and made me happier. So, I floated the idea of adopting Jax to my teenage son. He was unsupportive. I think he realized how much work another more active dog was. And maybe he was a little resentful of all the attention Jax was getting.

I decided to surrender the situation to the universe—if I was meant to adopt Jax, he wouldn’t find a forever home. Perfect solution—no action.

Then a forever home came knocking. The rescue agency told me that a couple was interested in adopting Jax. I decided this was a sign from the universe. He was meant to be adopted by someone else.

I tried to imagine what it would be like without him. Would I fall back into political news hell? The last time I had felt this strongly about a president, I threw a remote control through a TV projection screen. It cost $1,000 to repair. As a newly divorced mother with two teenagers, I couldn’t afford to break anything during the next four years.

I made an appointment to take Jax to meet his prospective forever family. I was miserable, but felt I had to let him go.

When Jax met his new parents, he was hesitant and scared—yet within a half hour, they were processing the adoption papers. I returned the borrowed crate and bits of remaining food (Jax ate a lot). We said goodbye, and I was “ugly crying” before I hit the freeway.

I moped all night and barely talked to my son. I took a glass of wine to the bathtub. But I was so distracted that I caught a bath towel on fire with a relaxation candle. To prevent further calamity, I went to bed, certain the universe was an asshat—and vowing never to trust it again.

The next morning was sh*tty. I felt horrible from the wine and sad at not having Jax as a companion on my morning walk. On my route to work, I got a text from the rescue agency. Jax was being returned, and they asked if I could foster him?

Maybe the universe wasn’t an asshat.

I wanted to adopt Jax, but needed my son’s approval. He was going to bear some of the responsibility, so it wasn’t fair to adopt without his agreement.

After some discussion, including renaming Jax to a more acceptable non-junk food name (Jake—from State Farm), my son agreed to let me adopt my political anxiety remedy.

And in the year since, I have not broken any TVs or melted down over political scandals (which is amazing, considering).

Do I recommend everyone who is struggling with political anxiety get a pet—no. Adopting a pet is no joke. Especially one that needs to run five miles a day, likes to chew eyewear (I now buy reading glasses in bulk), and thinks his now 60-pound frame is that of a Chihuahua.

But I love him. And am grateful to the universe for giving him to me.

How might adopting a pet (fish and guinea pigs count) help you better manage political anxiety?

“Until one has loved an animal, a part of one’s soul remains unawakened.” ~ Anatole France