Listen up: What Gay & Straight people need to know about being Bisexual. 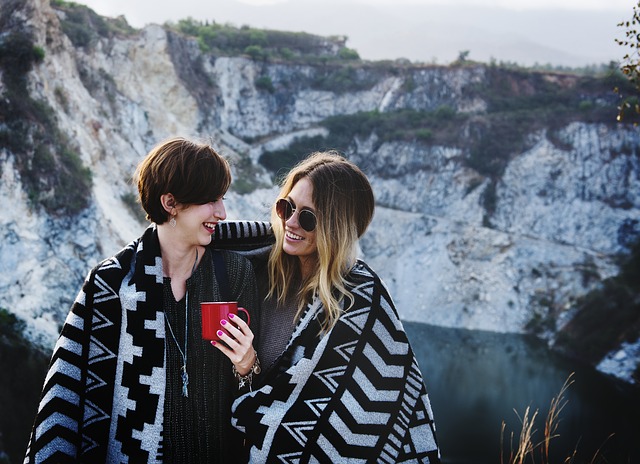 The other day, I was scrolling through social media, minding my own business, when I innocently stumbled upon a video, edited together using clips of celebrities discussing their experience with bisexuality, including Halsey, Kristen Stewart, Drew Barrymore, and many others.

I enjoyed this video. As a bisexual woman myself, it made me feel good. It made me proud to be who I am. And, yes, I know that the rule of thumb for the internet is that, every time you feel that way, don’t look at the comments. But I looked at the comments anyway. And, reading through them, my stomach sank.

It isn’t that the majority of comments were outwardly intending to be cruel or anything like that. In fact, I’m pretty sure that they were trying to be accepting. But they all pretty much read the same: “I don’t care.”

There were a few comments from actual bisexual people trying to defend the validity of the video, but the vast majority were from straight people or gay people (who went out of their way to identify themselves as gay), clogging up the comments with repeated assertions that they didn’t care.

They didn’t care so much, in fact, that it very quickly proved that they did. They cared a lot, or else they would have just moved on without making a comment.

And I think I understand where these comments come from, at least on the surface.

The idea behind it is not to make me, a bisexual woman, feel bad. Quite the opposite in fact—when straight and gay people make these comments, they think that they’re making me feel validated and normalized.

I’m so validated and normalized, in fact, that I shouldn’t even have to say that I’m bisexual. I shouldn’t say it at all. I should just stay quiet, really, and allow them to continue pretending that I don’t exist.

Because the way that these comments appear, whenever a celebrity or a fictional character is outed as bisexual, this idea of, “I don’t care who they sleep with, just as long as they perform well”—it feels less like they’re saying, “Be who you want to be,” and more like they’re saying “Please stop talking about this; I don’t want to hear about it.”

And maybe straight people and gay people don’t care. Maybe it doesn’t affect you. But I care, and, personally, I wish others would too.

Silencing bisexual people is not something that’s unique to the comment section of social media posts. In fact, it’s common enough that it actually has a name—bisexual erasure.

Bi erasure affects me when 47 percent of people say that they would never date a bisexual person. And, no, I’m not asking for 100 percent of the population to be looking to date me specifically, that would be, quite frankly, exhausting.

But the reasons that people cite to avoid getting involved with any bisexual person are actually disgusting. I’ve heard many people say that they would never date a bisexual because they’re afraid they might cheat on them (as though straight and gay people don’t cheat on their partners). I’ve heard many people say that it’s actually unfair for a bisexual person to try to enter into a committed relationship, because we all know that they’re eventually going to stray for penis or vagina or whatever.

Actress Megan Fox even made the comment once that, though she identifies as a bisexual woman, she “would never date a girl who was bisexual, because that means they also sleep with men, and men are so dirty that [she’d] never want to sleep with a girl who had slept with a man.” Before people even get to know me, bi erasure has already created this image of me as some sort of dirty, promiscuous whore, out to harm straight and gay people by entering into committed relationships with them.

And, lastly, bi erasure affects me when 44 percent of bisexual youth have reported experiencing suicidal thoughts in the last year (compared to 33 percent LGBTQ youth en masse). Bisexuals make up the largest single population in the LGBTQ community, and yet we are woefully underrepresented—by our own community.

So, to the straight and gay people who want to make sure we know that you don’t care about us—we know. You’ve proven that to us again and again, trust me. You can stop saying it.

But, like I said, I think that the majority of these comments do not come from an intentionally harmful place. I think that these are people who want to live in a society where nobody has to say what they are and can just be what they are. But the problem is that we don’t live in that society.

We live in a society where the label that we put on our sexual orientation affects the way that people treat us—whether we be straight, gay or lesbian, or bisexual. And when we are treated differently and ignored for the label that we identify as, then, trust me, it feels good to see a celebrity or fictional character that we may look up to, identifying under the same label. It feels liberating. We feel validated and normalized.

So, to all the straight and gay people reading this (and I sincerely hope you are reading this; you are who I wrote this for, after all), I want to ask a few things from you.

I want you to let us speak when we have something to say. Before you rush off to tell us that you don’t care, that you don’t want to hear it—listen. Please. We might even open your mind to possibilities that you did not know existed.

And when it comes to stereotypes that you have developed in the absence of actual bisexual representation, I want to ask you to think about them critically. Because the thing about bisexual people is that we are… people! We are a relatively large group of people too, and growing larger (one in three young American adults personally identify on the bisexual spectrum, after all).

This means that we are full of more variety than one might expect—if they ever saw or heard from us.