What we Learn when we finally Slow Down & Allow ourselves to Do Nothing.

Standing still is not the same as being stuck.

How many times have you heard a variation of: “Life is a journey, not a destination?” We nod and agree when it is spoken; it’s profound, if not cliché. That being said, what does it really mean?

We understand life is not a destination. Most of us want to squeeze all we can out of this lifetime—every last drop of the moments we’re given while we are here. I thought I comprehended this. I thought I had mastered stillness. I had not. I have not.

I have been goal-oriented my entire life. As a perfectionist with more anxiety than I’d like to publicly admit, I have always chased after the next affirmation that I am doing okay. I’ve failed before—bad failures, and big setbacks, but I trudged along anyway. Often, however, I would not even try if the fear of failure weighed too heavily upon me. Certain things always seemed so out of reach for me.

Running, for example. When I decided I would face my fear of running, that was a big step for me. I just thought I was someone who could never run—so why even bother?

But, I completed a “Couch to 5k” challenge. I was convinced I would never be able to do one solitary kilometer, let alone five. And after the first day, it certainly seemed I would prove my fears were valid. I kept trying, even when my lungs seared with pain, and eventually I conquered that fear. I wondered why I ever thought jogging a 5k would be difficult because I did it, every single meter—albeit I’m slow as cold molasses.

What was important for me to realize was that the high from reaching the goal was short-lived. The real victory was in understanding that those weeks of training were applicable to everyday life. That the bravest step was the first, not the last. Sometimes, when I thought I couldn’t possibly run five more steps, I’d look ahead and see something: a mailbox, a lamppost, a car in a driveway, even a rock on the sidewalk, and I would say, just keep going until you get there. Then I’d start over again with a new goal. The next driveway. The next street.

This has been my life. The next accomplishment, the next award, the next degree, the next job, the next pound to lose, the next destination. Veni, vidi, vici! These things affirmed that I was succeeding in life. Even if other areas of my life were falling spectacularly apart simultaneously. Which, often, they were.

When my mom was diagnosed with cancer for a third time, there was to be no conquering. It was a destination we were careening toward, and could not control, only slightly delay.

I was a survivor. I was certainly not thriving.

So when the universe presented me with the man I have come to love deep within my soul, and said: marry him, quit the library job, set aside your identity as a librarian, sell most of your stuff, pack up, and move to a foreign country, I never hesitated once. I jumped into what would be the biggest leap of faith for me, believing in what the universe had in store. This was within six months of meeting him.

It sounded like something from a romantic movie, and it still does at times. Through fate or sheer folly, I was going to believe in a future I could never have imagined. At the time, it felt completely exhilarating, and it was also tremendously overwhelming. In September, I landed in Bermuda.

This is when I learned to really stand still.

I hadn’t had a chance to truly stand still in years. Through extreme lows, to extreme highs, there was so much going on around me. Then it all stopped.

For the first time, I had no job and no classes. I was not a caregiver, supervisor, or educator. I was just me. Have you ever just stared at a wall for a couple of hours contemplating your life? It is daunting. I was scared. I still am scared. Of the nothing.

Being a wife, and partner? Got it; love it. Not being “something,” career-wise? It felt shameful.

People asked in earnest (and sometimes, not so earnestly), “What do you do? Do you have a job? Are you going to apply for a job? What will you do with your time?”

For the first few months, I had a hard time with the truth. I knew I wanted to try writing. Really try writing. How could I explain that to people? It is not an easily attained goal with things I could check off, and say, see here? It says I’m a writer. More than that, what if I failed? Miserably failed? The horror.

So I lied. I said it would be hard to find library work in Bermuda. That is true, but I had no real intention of even looking. That made me feel guilty and ashamed. My husband is so supportive of my writing, and holding my hand with every step, but I still felt silly and embarrassed.

I busied myself for the first while with setting up a home, falling off a scooter and dealing with the subsequent injuries, and a few other distractions that life thrust upon me. I grabbed onto those distractions. They were good excuses. Can’t fail if you don’t try. I felt exhausted—from the nothing. I felt lost in the nothing.

Then I allowed myself to be quiet. To listen.

I took up yoga, and I was far from being a yogi, but there is so much more to yoga than being able twist and contort. I would argue the hardest pose is corpse pose, or savasana. Other much more demanding poses of my Hatha classes physically pushed me, so I’d correct my posture, remember to breathe, and move into the stretch. But I didn’t always focus on the mental acuity required of my practice. And when I was reposed on my mat in savasana, pushing thoughts out of my head and just being still—it was hard. So hard. Not to think of what I had to do after class. My next task. My next goal. Check, check, check. It was a nothing with purpose. Yes, nothing can have a purpose.

Once I embraced the idea of doing nothing, of standing still, it was freeing.

Sometimes, I stop and do this while I’m folding laundry. Walking around a grocery store. Hiking in the wild flora of this island. Walking along a sun-kissed beach. I just stop and stand still. It is okay that I am doing “nothing.” I am growing.

You learn a lot from standing still. Even for a moment.

You might just hear guidance from the universe being whispered into your ear, so faint—you almost miss it. I heard it like wind moving between the branches of a tree. A rustle, and a creak: Write. No more trying, no more “going to,” just write.

As one of my favourite enlightened beings would say, “Do, or do not. There is no try.” Yoda is right. “Try” is a maybe; a someday. “Do” is now. So now, I write. Without knowing what my next mailbox or driveway will be—it does not matter. That is the future, and I am in the now. The journey is in the moments you’re standing still. Sometimes, you need to learn from your nothing so that you are ready for the extraordinary. 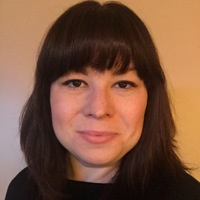