An Ex-Monk’s Lessons for a Better, Happier Life. 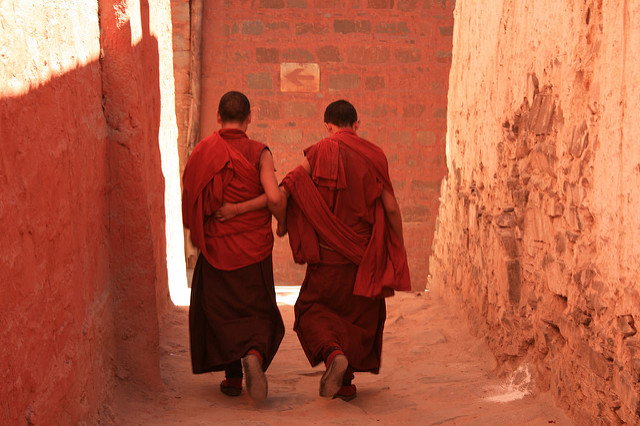 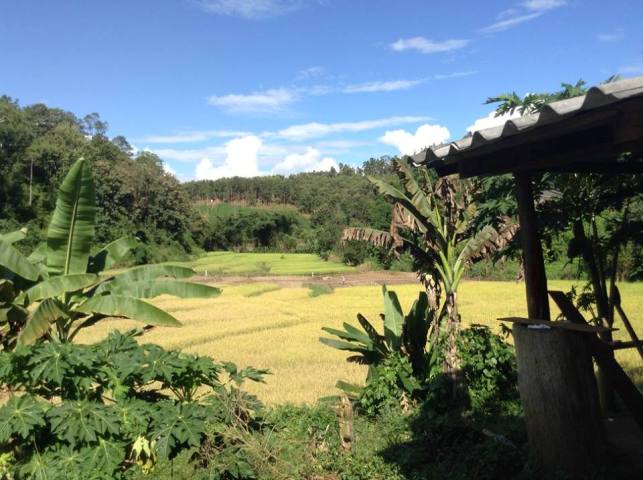 In the middle of October, after spending the last two months meditating in a monastery in Kathmandu, climbing in the Himalayas, and touring Thailand on a scooter, my body and mind were telling me that I needed some time to rest, relax, and reflect.

While searching online, I found a website for a small farm built on the principles of mindfulness, peace, harmony, and veganism.

Just what I was looking for!

So, I jumped on my scooter once more and rode out into the remote hills of northern Thailand searching for Mindful Farm among late monsoon rain clouds, ancient rain forests, and idyllic rice paddies.

Mindful Farm is run by Pi Nan and his wife Noriko.

Pi Nan was a monk for over 20 years. He traveled around Thailand and Laos practicing and preaching the dharma. Pi means “older brother” and Nan means “monk.” Even though he left the monastic life six years ago, he still retains his monk’s name. Nowadays, Pi Nan can be found tending to his vegetable patch, watching over his pond where he grows morning glories, and wandering in his orchards where bananas, guava, and papaya grow in abundance. He is a reserved man, often silent, and spends much of his time with his hands and knees in the red earth and his eyes fixed firmly on the fertile ground—to which he dedicates all of his time, energy, and effort.

Pi Nan’s dream is to build his own vegan paradise, which one day, he hopes, will become a model to teach others and incrementally transform the world. 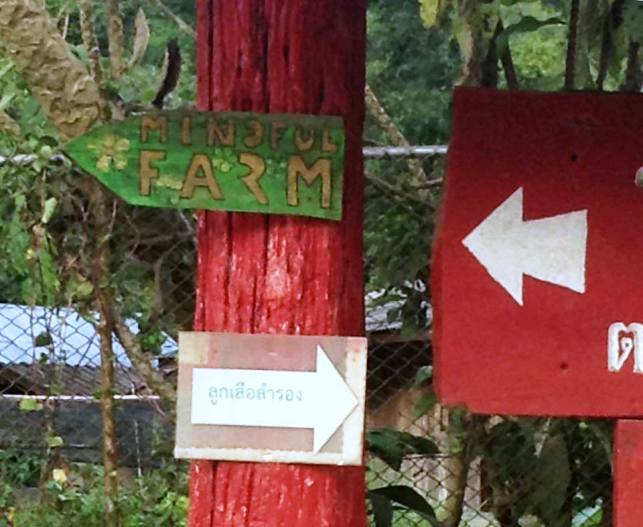 I spent five days living on Mindful Farm with Pi Nan and a dozen other volunteers from around the world. We learned a great deal about Buddhist practices, permaculture, and sustainability from Pi Nan.

May these lessons that follow help us all to construct a happier world today and a safer world for future generations.

One of Pi Nan’s first lessons was how to wake up. When we wake up each morning, we should ask ourselves one simple question: “What can I give to the planet today?”

As we prepared breakfast early one morning, I asked Pi Nan how long he meditates each day. “Twenty-four hours a day,” he replied. “Everything I do is meditation.” As we finished preparing the fruit salad, Pi Nan smiled and let out a deep, satisfied sigh. “This fruit salad is love,” he explained. “People will eat it and be content. This is my paradise.”

Pi Nan believes that there are four roots to a peaceful life: organic farming, vegetarianism, yoga, and meditation.

Pin Nan taught us about the positive benefits of cultivating love and the dangers of desire. “It is only when we don’t want anything that we can be truly happy,” he explained. “It is only when we overcome our desire to look after ourselves that we can be content forever. We came to this planet to love. The pure nature of our hearts is pure, like clear water. Anger muddies this clear water.”

Anger arises when we fail to adjust our expectations to an understanding that everything in the universe is impermanent. When Pi Nan plants avocados, he does not expect all of them to grow to maturity. If he plants 100, perhaps only 80 will survive. But, as Pi Nan added with a smile of utmost satisfaction, “Eighty percent is perfection!”

Pi Nan was not at peace with himself when he wore the orange robes of the sangha. Now that he has swapped his monk’s robes and mala beads for a straw hat and a shovel, he has found peace. The reason for this, he explained, is that now he has no future. He lives only in the present moment. He makes plans for the future, tending his vegetables, but he is not attached to the outcome. “It is very important that we learn to let everything go,” Pi Nan told us. “This is the way to true happiness.”

One morning after breakfast, Pi Nan offered us an analogy to explain how everything is connected.

The United States has banned the sale of a certain brand of harmful pesticides in their domestic market. Instead, American agro-businesses export these pesticides to less regulated Southeast Asian countries such as Thailand and Vietnam. As he told this story, Pi Nan began to laugh. “These companies believe they are being very clever,” he said between chuckles. As it so happens, much of the rice produced in Southeast Asia that is sprayed with these banned pesticides is sold back to the American market for consumption.

What can this teach us? Acting with a lack of compassion for others can very easily increase our own suffering.

Almost everything that we consume that is manufactured using chemicals can be replaced with organic ingredients. Washing-up liquid, detergent, and soap can be produced using the ash produced after burning a wood fire. Certain stones possess the same antibacterial properties as deodorant and are much less harmful to the atmosphere and our bodies. And instead of using insect repellents which contain deet and other noxious chemicals, fresh tobacco leaves soaked in water can be applied to the skin to provide protection against mosquitoes and other winged critters.

The highest goal of any life is to attain enlightenment and to rid the heart of sorrow; or as Pi Nan joked, “to retire from suffering.” This way of life is possible for laypeople, monks, and nuns alike. “Pure love,” Pi Nan expounded, “and love for all beings, these are the key to the life of freedom.” And, crucially: “Care for all beings includes caring for yourself.”

If all you do is love and give and think of others, you will be happy. If you only think of your own desires and needs, you will live an empty life. The world spins as a result of love. Pi Nan believes that at the earth’s core is a huge emerald which, when human beings share love and compassion, is energized and keeps the earth spinning on its axis.

On my final morning at Mindful Farm, I helped Pi Nan to prepare breakfast for the other volunteers. I asked him: “Pi Nan, what is the meaning of a happy life?” He closed his eyes, smiled, and spoke slowly and thoughtfully: “Love.”

Why Non-attachment is one of the Keys to a Happy Life & Relationship.

6 Lessons in Happiness from One of the Happiest Countries in the World.

Bonus: 5 Mindful Things to do Each Morning. 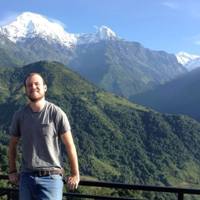