Emma Gonzalez, Politics & the Power of the Unlikely Someone.

The moment Emma Gonzalez took the stage at Saturday’s March for our Lives protest in Washington, D.C., you knew.

You could tell by the look on her face. It was steely determination.

You could tell by the sewn-on patches on her khaki bomber jacket. One was the Cuban flag. Another one read, “We Call B.S.”

You could tell by her walk. Her entire cadence was that of a battle cry.

Something important was about to be said.

More than 800,000 people showed up to the demonstration in Washington, D.C. that day calling for an end to gun violence. That is a record. So no pressure or anything, but if you’re Emma Gonzalez and you have to speak in front of all those people—not to mention the millions of others watching all over the world—you pretty much have to be the most amazingly inspiring person anybody could possibly be. You have to say stuff everyone will remember.

Or you can take it in a totally different direction.

What Emma pulled off on that stage was nothing short of brilliant. I don’t care who you are or where you stand on gun control, you have to admit this is someone who knows how to effectively deliver a message. That being: do something already, ya greedy pricks, because what’s happening here is way beyond comprehension.

“Six minutes, and about 20 seconds,” she began. “In a little over six minutes, 17 of our friends were taken from us, 15 were injured, and everyone, absolutely everyone in the Douglas community was forever altered.”

The kids at Marjory Stoneman Douglas High School were shot at. They had to lock themselves in closets where they texted their parents to tell them they loved them in case they didn’t make it. They hid under the bodies of their friends. I’d say that would forever alter a person. It altered me, and I live nowhere near Florida.

Most of us don’t understand what it would feel like to be in a situation as horrific as this, and probably never will. I’m quite sure there are no words in the English language that could even come close to describing it. So almost two minutes in, after naming each of the 17 victims and what they would never get to do again, an emotional Emma abruptly stopped talking and did something else. 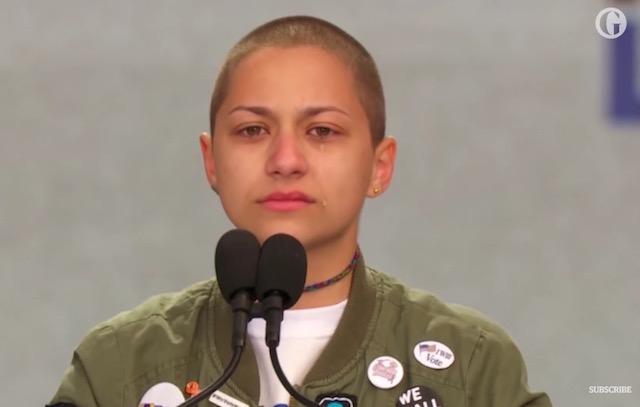 At first, you had no idea what was happening. Was she taking a second to think or to regain a little composure? Maybe she was completely overwhelmed by the gravity of the moment, like the girl who spoke before her who actually threw up right on stage. But Emma knew exactly what she was doing, and what followed was the most intense four minutes and 26 seconds probably ever.

Emma Gonzalez is the unlikely face of a movement. She’s 18 years old. She wears hemp bracelets and shaves her head. She’s the president of her school’s Gay-Straight Alliance. She’s also hell-bent on bringing down any and all lawmakers who take donations from the National Rifle Association. And judging from her face-off with NRA spokeswoman Dana Loesch over their position on automatic weapons and bump stocks, they might want to quit with the go-away-kid-you-bother-me routine because 18-year-olds can vote. And she’s not going anywhere until gun laws change and schools are safe. That’s all. I honestly don’t understand what the problem is.

“I want you to know that will we support your [Loesch’s] two children in a way that you will not.”

When I was 18, I was drinking wine coolers and joyriding in my brother’s Cougar. The girl has guts.

So Emma stayed silent. For four-and-a-half brutal minutes, without so much as a flinch, she stared straight ahead at that humongous crowd and said absolutely nothing. 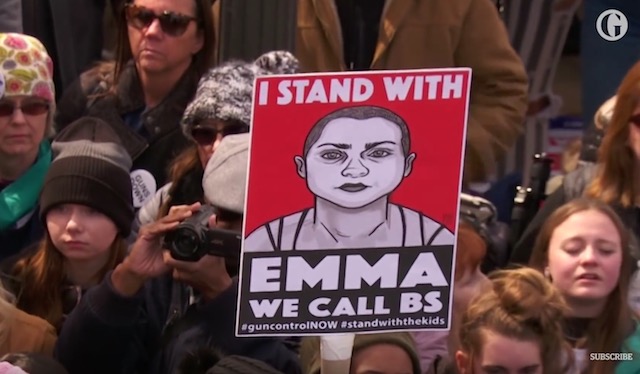 You know who else said nothing?

Colin Kaepernick, when he first took a knee during the national anthem as a protest against social injustice and the deaths of African-Americans at the hands of the police.

And the “Hijabless Woman” Vida Movahed, who stood on a concrete box waving a stick around with a white scarf at the end of it on a busy street in Tehran, Iran, this past January in protest of the country’s compulsory hijab rules.

And Tommie Smith and John Carlos, two American Olympic sprinters and medalists who held their black-gloved fists in the air during their medal ceremony in 1968 as a silent salute to human rights.

And the “Unknown Rebel” from 1989 who stood in Beijing’s Tiananmen Square in front of a line of 18 tanks deployed by the Chinese government to suppress the efforts of protesters who opposed its policies.

And the Vietnam War protester who famously placed a flower in the barrel of a rifle at a march on the Pentagon in 1967.

And Rosa Parks, when she refused to give up her seat to a white man in 1955 in violation of Alabama segregation laws.

These people weren’t presidents. They weren’t in government. They didn’t have authority over anyone or anything. And I bet not one of them woke up that morning and said to themselves, I know what I’ll do today. I’m just gonna go change the world.

Except maybe Emma. The truth is, she already has.

Paul McCartney was at the March for Our Lives Saturday in New York City. “One of my best friends was killed in gun violence right around here,” he told a CNN reporter. “So it’s important to me.”

The first thing I thought when I read that was, oh no, who died?

That’s how easy it is to forget.

It’s been 37 years since John Lennon was shot. A lot of people have been shot. Maybe something will change in the near future, maybe not. Or maybe we should all move to the moon. I seriously doubt they’ll let you bring any guns with you on a rocket ship.

Six minutes and 20 seconds is not a long time. It probably took you about half that to read this. Just something to remember while we’re stuck here on Earth together, trying to make things better for everyone.