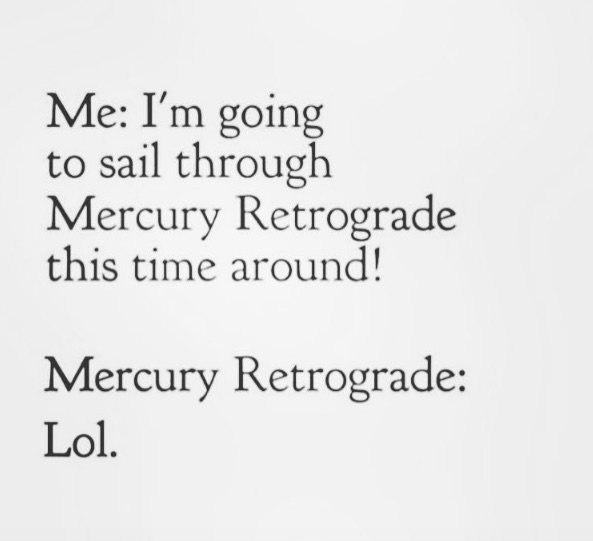 On March 22nd, the powerful and potent planet Mercury turns retrograde and is bringing with it an energetic communication storm.

One of the main reasons for this is that Mercury is retrograde in the zodiac sign of raw, candid Aries, highlighting and intensifying all of this fiery sign’s characteristics.

Aries is a forceful fire sign, and is renowned for its somewhat aggressive, straightforward, brutally honest, and no-nonsense communication style. Aries signs don’t mean to be quite so abrasive, blunt, and harsh, but their clumsy ram qualities can cause them to act hastily and enter conversations in an explosive way, similar to how a bull would be if it were to run into a china shop.

Mercury retrograde will be hard-hitting for all zodiac signs as they are influenced by the traits of impatient, dominant, short-tempered Aries during an already a sensitive time for communication. It’s highly likely conversations with loved ones, family, and friends will be frustrating and may quickly become distorted, with tiny details being blown out of proportion leading to “fight or flight” responses kicking in.

Therefore, we may find ourselves feeling guilty and remorseful when our innermost thoughts and emotions carelessly spill out before we’ve had a chance to pause and consider the longer-term consequences.

This is the why I personally recommend that anyone who is highly sensitive to energy takes note of when Mercury is retrograde, as this period can be quite ruthless and have a turbulent effect on our lives. It can also cause chaotic confrontations and personality clashes within our closest relationships.

The reason we are so highly affected by the planet Mercury is because it has a high density, and is believed to be mostly made of iron. It is like a huge magnet orbiting the sun and the closer it gets to Earth, the more effect it has on it. During Mercury retrograde, Mercury is in its closest position to Earth, which is why many people feel pushed and pulled, irritable, and quite often unstable.

Mercury is the ruler of intelligence, the mind, and all forms of communication and is associated with contracts, listening, learning, negotiating, purchasing, selling, speaking, travel plans, technology, electronics, GPS, and lost items. It is well known to be a troublemaking planet while in retrograde. Therefore, normal conversations, interactions, and plans that would normally be straightforward will be full of complications and will likely go haywire, so we can expect any or all of these things to break down, malfunction, regress, or erupt out of control.

Mercury retrograde is notorious for bringing pandemonium to communication, so conversations with loved ones may quickly turn heated, with one on the attack and the other on the defensive—and neither having much tact. Telephone conversations, emails, and simple discussions may be full of misunderstandings, misinterpretations, and missing links, which is made particularly worse as the majority of people will seem hell-bent on winning arguments at any cost.

It is vitally important to consciously remind ourselves to filter our thoughts before we communicate, so that we dissect, analyse, and figure out exactly who and what mischievous Mercury has brought to our attention and why. It is wise to try not to be impulsive, jump to irrational conclusions, or make hasty prejudgments, and to try to think three times before we open our mouth to speak. It is likely that we may feel quite paranoid and take criticism to heart, feeling as though any negative comment we hear is aimed in our direction as a deliberate attempt to discredit and derail us.

Those who are highly sensitive to energy will have been sensing the intensity in the atmosphere for the past week or two due to the shadow period that precedes Mercury retrograde, and may have felt highly perceptive, intuitive, and sensitive.

We may also find we can’t sleep, feel irritable, and are on an energetic “high,” and that our lives seem far more turbulent than usual. When we are sleep deprived, we may feel more confused and edgy, as though we are running on adrenaline, causing us to feel achy, overly emotional, touchy, and irrational.

Even though it feels far from it at the time, Mercury retrograde is always beneficial. It shakes us up and sends shockwaves through our relationships as it triggers unhealed wounds and churns up old history. Therefore, it is highly possible that ghosts from our past will make unexpected appearances accompanied with emotional confessions; this is to ask us to take one last look before we decide to reopen or firmly lock doors that we previously only closed. We may receive calls or messages that will take us by surprise and cause a great deal of tension, especially if we wrongly interpret the intentions of the messenger and jump to false conclusions.

Before we alter our life path, we can first look at which internal buttons the people around us are pressing and why we have felt such a strong desire to react to what is being said; it is essential to and discern exactly who and what the Mercury retrograde phase brings to our attention and for what higher reason.

It is advisable not to pay too much attention to anything that goes wrong during the retrograde, as once Mercury appears back on track and is travelling straight in its regular motion, our meaningful relationships usually straighten out too.

It is worthwhile to tread lightly and with caution during this time, and it is not recommended, unless absolutely necessary, to make life-changing decisions during a retrograde. This is a time for reflection, reexamination, discernment, introspection, and caution—not for hasty emotion-fuelled reactions or major decisions.

Retrogrades are catalysts for positive transformation and radiate immensely powerful bursts of supercharged cosmic energy that dramatically shake up and alter our lives, giving us the opportunity to wipe the karmic slate clean and turn things around for the better.

During Mercury retrograde, there a few words that can turn a potentially traumatic period into a positive and calm one. These words are simply, “Let it go.”

Breathe deeply, surrender, and keep letting it all go.

Bonus: The Simple Buddhist Trick to being Happy.