“What is ‘real’?” asked the rabbit. “Does it hurt?” ~ Margery Williams, The Velveteen Rabbit

Becoming Real: Lessons on Showing up and Being Seen.

I was not a popular kid. I was awkward and overweight. I had unruly hair, thick glasses, and was a total goody two-shoes. A proper “rule follower,” I was the kid parents loved and other children tolerated.

All I wanted growing up was to belong. And, as many kids and a number of adults do, I confused fitting in with belonging.

Brené Brown writes, “Fitting in is about assessing a situation and becoming who you need to be in order to be accepted. Belonging, on the other hand, doesn’t require us to change who we are; it requires us to be who we are.”

Had someone explained this difference to me 30 years ago, when I was a self-conscious, 13-year-old middle schooler with Strawberry Shortcake on her glasses, I doubt very seriously it would have mattered.

(And, yes, you read that correctly. I had a tiny little Strawberry Shortcake on the bottom corner of one lens. Not my most successful effort at fitting in.)

From purchasing giant cans of Aqua Net to joining the electric-blue eye shadow craze, I spent years and great effort attempting to be who I thought my peers wanted me to be, while dancing carefully around what my parents and other adults expected of me.

The trend continued into adulthood, but shifted from buying the right hairspray and makeup to saying the right things, making the right choices, and having the right job. Performing, perfecting, and pleasing became my default effort, hustling for my worthiness and trying desperately to find my place.

Fast forward to 2014 when a friend introduced me to the work of Brené Brown. At the end of her book, Daring Greatly, Brené writes about standing on the outside of her life looking in, wondering what it would be like if she had the courage to show up and let herself be seen. (Insert all the tears here.)

Brené’s words resonated so deeply for me that I lost my footing. What would it be like to show up and be seen for my real—messy, imperfect, and often overwhelmed—self? I could not imagine.

Several years ago, Glennon Doyle skyrocketed to stardom through her blog. Her secret? Telling the truth of her messy life. In a culture of highly curated social media posts and everybody being “fine,” Glennon offered a “brutiful” perspective on the reality of life.

Her refreshing honesty and “tell it like it is” mentality opened up a new world for a generation of moms who were wondering if they were the only ones having a hard time.

Her ability to acknowledge her sensitivity and to contest the idea that she was somehow broken offered us “highly sensitive” types permission to own our big feelings too. Glennon made being real fashionable.

Our world is hungry for authentic connection—for the opportunity to see and be seen as our raw, vulnerable, imperfect selves, and to let go of our perfecting and pleasing and just be.

It isn’t easy, and it can sometimes set us up for heartache, but choosing authenticity—allowing who we really are to shine through, rather than trying to be who we think we’re supposed to—is transformational.

When I turned 40, I experienced what I call my “mid-life awakening.” That year turned out to be quite a doozy: celebrated a milestone birthday, lost my dad to heart disease, moved, realized I had been living on other peoples’ terms for far too long, and had a total emotional crisis and catharsis.

When my dad died, I was stripped so completely of the tight control I had on my life that I had no choice but to face what was underneath all my armor. I had worked so hard at presenting a poised, put-together exterior.

Big feelings are my reality. Being quirky and nerdy and curious is my truth. I’m not super hip. I don’t wear all the right clothes or go to the cool places. I’ve done some of life a little backward. I love deep conversation, the kind that skips over the mundane and goes straight to what matters. I like being alone. I like church (most of the time). Most days I feel like a total screw-up. Other days I marvel at the life I’ve created.

It has taken me years to get to a place where I could say all that without my cheeks flushing, betraying my concern over what people might think.

So, once I decided that I wanted to practice being real, I had to figure out exactly how to go about it.

For starters, when people ask how I’m doing, I’ve (mostly) stopped saying “fine,” or “busy, but good” (my two personal favorites). And, I’ve started telling the truth. “I’m really not doing well. Thanks for asking.” Or, “Today has been so good! I’d love to tell you what happened.”

Another practice has been saying what I mean and meaning what I say. Instead of working so hard to say something perfectly or to say what I think another person wants to hear, I’ve been working hard to speak my truth. Of course, some days that’s easier than others.

In the most basic practice, being real for me has been going out in public with no makeup on or dolling up when I feel like it. It’s letting my hair go gray. It’s proudly wearing my “You are Enough” and “You Belong” t-shirts even if people look at me weird. It’s being brave with my words and standing up for what I believe even when what I believe is contrary to popular opinion.

It’s such a powerful concept—living as we actually are—and yet, so many of us spin our wheels trying desperately to be who our boss, our significant other or crush, our parents, our children, our priest or minister, our hero or mentor wants us to be.

The trouble is after we spend so much time trying to be somebody else, we lose sight of who we really are.

Here’s the thing. I’m convinced most of us scroll through Facebook and Instagram comparing our unbelievably jacked up lives to everyone else’s practically perfect everything.

What if, instead of carefully curating what parts of ourselves we shared with others, we started to let our guard down a bit? I’m not talking about unbounded vulnerability with anyone and everyone. I’m talking about showing up in ways that matter to us and to others. I’m talking about letting people see the tattered bits of our imperfect lives.

What would it look like if, instead of running away from hard things because it’s uncomfortable and might make us look like crazy liberals or staunch conservatives, we show up in our full humanity and with our big feelings expecting to meet and welcome the same in another?

I don’t have the answers, of course, to what frees each of us up to become our real selves. But, I’m guessing it begins with a choice. We choose authenticity, and we cultivate it through practice.

So, I’ve hung up my Aqua Net and blue eye shadow, and I’m embracing the real person I am becoming. It may hurt a little—but, I’ve heard that when you are real, you don’t mind being hurt. 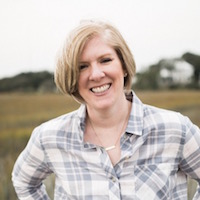