Why I Love Fat Girls. 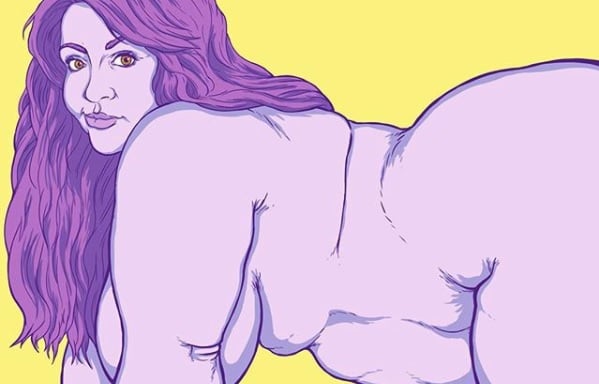 That’s right, I said it.

But before we get into the whys and wherefores, let’s talk about the elephant in the room.

So, if your pastime is recreational outrage, if you’re an easily-triggered social justice warrior, or a plain-clothed officer of the Politically Correct Police Department, please take a breath, and “swipe left.”

I developed a healthy dislike of political correctness in the late 1980s when I was told by the Caucasian Consciousness Committee (that apparently decides these things) I should be gravely offended by a nursery rhyme about black sheep, irreconcilably insulted by black chalkboards, and outraged by black bin bags. I wasn’t.

Suffocating in this PC climate, like so many others, the white, middle-aged, middle-class mother of an old girlfriend of mine was hiding in the kitchen one evening, afraid to come out. Why? Because she had bought a Black Forest Gateau for dessert and was terrified of offending me. Can we please grow up!

Things have not gotten any better since the 1980s—if anything, Political Correctness has grown ever more sinister, and stupid. It has become no more than an oafish, Orwellian, bullying Big Brother.

On the subject of growing up, I first realised I liked fat girls when I was six years old. I was upset by something or other at school and my teacher, a big buxom blonde woman, sat me on her lap to comfort me, and continued to read from a storybook to the rest of the class.

Not only is fat especially good to feel, it also has an irresistible visual appeal. In the 1959 movie classic, “Some Like It Hot,” the actor Jack Lemmon, watching Marilyn Monroe’s character, Sugar, hurry to catch a train, remarks with unbridled wonder, “Look how she moves! It’s like jello on springs!”

Watching Serena Williams play tennis, Jennifer Lopez dance, Adele sing, or Ashley Graham strut her stuff on the catwalk, produces the same wonder in me as Jack Lemmon on a Sugar-high, the same wonder as when I look at a Matisse Blue Nude or the thick oleaginous limbs of a Gauguin painting. The fat form of a human being is, quite literally, a work of art.

After imprinting on the fat form of my teacher on that defining day, it was the chubby girls I teased at school. I pulled their pigtails and pursued them around the schoolyard, playing kiss-chase, actually believing they really were made of sugar and spice and all things nice.

Fast forward 11 years, and my first real girlfriend was the prettiest girl in school—thick-thighed and doe-eyed, it was love at first sight. Her blonde bob never had a hair out of place. She never wore makeup, but her nails were always perfectly painted, and when she smiled she could, in an instant, make a boy die, and then bring him back to life.

The feeling of a thousand fireflies in your stomach just before you ask out a beautiful girl is both terrifying and intoxicating, especially for a 17-year-old boy. But we do it anyway, conditioned and compelled by the parabolic curves of Mother Nature and her perpetual promise of a kiss at the end of the chase.

We dated for one sublime summer, and when the falling leaves turned gold in October, I moved away from that little coastal town in the south east of England, followed the autumnal Yellow Brick Road to London, and I never saw her again.

But you never forget your first, and for the rest of my adult life my first girlfriend set the template for my preferred type: a sweet smile, a good heart, and a big arse. I’ve never been concerned with hair colour, eye colour, or skin colour—like the song goes, “I’m all about the bass.”

The Thought Police are no doubt itching to make a bust here, insisting that it’s shallow and superficial to be attracted only to a certain type of person or have a specific preference. Officiously, I have been told many times: I should love a person not for how they look but for “who they are on the inside.” Typical dualistic pseudo-profundity. Bumper sticker wisdom. Why can’t I love someone for who they are inside and out?

Contrary to the oft cited law of the Conscience Cops, beauty is not “only skin deep.” It’s actually far deeper: it goes all the way to the soul. I live by that law of attraction, and no other.

But besides the proselytising skinny people, the real problem with having a fat fetish is the chubbies themselves. So often they go through life reciting another of those bland bumper sticker mantras, “Love me for who I am.” But when they are faced with the reality of someone who does exactly that, it often turns out they haven’t yet learned to love themselves. Instead, they are stuck in a pathetic pattern of socially induced self-loathing, and systematically sabotage their loving relationships.

Presented all their lives with media images of slim, airbrushed, ideally lit, photoshopped perfection, the pressure to conform to this singular idealised image of beauty must be immense. Inevitably so many fail, and hate themselves for it.

Back in the day, before teaching yoga and qigong, I was a personal trainer in London. I loved helping the chubbies get fit and healthy, but it would break my heart to see them obsess and not know when to stop losing weight, desperately trying to force-fit their two litre reduced-fat bodies into a one litre zero-fat bottle.

Cue more self-loathing, lower self-esteem, eating disorders, and depression when the realisation dawned on them that I wasn’t the Wizard of Oz after all, and no amount of wishing or working out would get them that picture-perfect idealised version of themselves. They could never measure up to the images they saw on every billboard, in every magazine, music video, and movie.

But let me be clear, I am not glorifying obesity or excusing poor lifestyle choices. I am simply advocating the social acceptance of a broader definition of health and beauty—beyond the slim, toned and tanned, thigh-gapped body type we are conditioned to accept and promote.

But things are changing, albeit slowly. Curvy, voluptuous, plus-sized women are now increasingly seen and heard in the fashion world, movies, music, and the general media. And yet, sourcing a photograph for this article presented me with very slim pickings and only a handful of copyright-free images of yummy chubbies among the hundreds of their lovely but more lithe counterparts.

Fat or thin, black or white, straight or gay, when at last we come out of the kitchen, the closet, and our conformity, then we will realise the world has changed, because we have changed it.

And in our brave new world we will discover after all that we had no need for a wizard to turn us into an idealised version of ourselves. We will realise that all along we had the heart, the brains, and the courage to be who we truly are, and love who we truly want, inside and out.

Bonus: a Playlist for Fat Lovers: