A Letter to the I.C.E. Man at the United States Border. 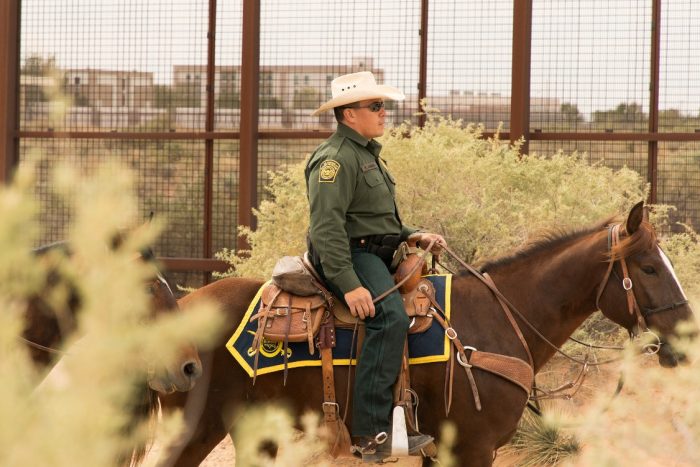 Listen, I really do want to get it right, because none of us wants to be one of those folks who say, “Gee, they all look the same to me.”

Whatever your title, I’m writing to you—the uniformed government man on the left-hand side of that news photo.

You know the one—the snapshot where the three of you are standing in a loose triangle, you on the left-hand side, standing half in and half out of the frame. All of you have truncheons and holsters; you are towering over the little migrant boy with the Number 47 vest worn over his shirt. In the photo, and unlike the little brown boy, we can only see your green uniform, but not your badge or face.

So, seeing as you’re in the business of processing and tagging, let’s keep things simple and civil and call you Mr. ICE. And no, I won’t insult you or debase my letter here with one more “The ICE-man cometh” jokes—which I’m sure you’re weary of. In fact, let’s drop those unfriendly capital letters, that nasty acronym, and just call you Mr. Ice. I think it suits you.

Now, Mr. Ice, I’m sure you’re wondering why a middle-aged Caucasian woman from Massachusetts is writing to you today or, for that matter, what the dickens I know—or have a right to say—about migrants and borders and illegal immigrants to the U.S. of A.

So, let me break the ice here with a wee story. You seem like a busy man, so I’ll make it quick.

Years ago, when I was being processed as a permanent resident alien, when I was being fingerprinted, tested, and medically examined to be eligible to live in this country, I had to tick a box that assured your government that, from 1939 to 1945, I had never been involved in Nazi war crimes.

Those dates, you will recall from your school history classes, were when World War II began and ended. And Nazis, you will recall, were what we called all those folks who did unspeakable things to other people because they (the Nazis) worked and walked in lockstep under a dictator.

I was born and grew up in Ireland, a little green country that stayed neutral in both world wars—though my parents did go without tea, flour, and nylon stockings, and some Irish signed up to fight for the British army.

My birth date was long after 1945, but that didn’t matter.

Among all my other pre-qualifiers, I had to tick a box to verify my noninvolvement in mass torture, incarceration, and murder, including that of children.

In fact, I recall feeling a twinge of pride at not being one of those. I also assumed that you just didn’t want that sort here in this country, and bless your American hearts, why should you?

I’m worried about you, Mr. Ice. Worried sick. So sick that, in these hot summer nights, I wake up thinking of you and little Boy Number 47. In my half-awake state, I often catch myself in one of those mental slipups where I find myself misnaming him, just like I might have misnamed you.

“The Boy in the Striped Pyjamas,” I think. “Where is that little boy now, tonight?”

“Oops! Silly me. That was a different boy, from that different era, in a totally different country and continent. Lying there in the dark, I see Boy Number 47’s downcast, sorrowful stare.

On those nights when I can’t get back to sleep, I get to thinking of you, too, and all that you have signed up to do. Well, after that, I’m so sad that I roll into the fetal position and, though it’s been years since I owned or used one, I find myself whispering one of my dead mother’s old rosary prayers.

It’s a kind of worry bead chain, only it’s been formally blessed and often passed down within generations of the same family.

Want to see the real thing? Leave Boy Number 47 there with one of your other truncheon-toting colleagues and go find the lockbox marked, “Confiscated Property.” By all accounts, you’ll find lots of them there, in blue and green and brown and yellow.

So what about you, Mr. Ice? As you work the line down there at our southern border, as you tag and toil in that murderous heat, does this border gig of yours trigger all your own worst memories? Does this job take you back to that teenage summer job at the local ice-cream stand?

Oh, my. How could you forget those sizzling summers, when the queue at your window grew so long that eventually, all those faces and voices and languages blurred together. Heck, half of them stood at the wrong window, or couldn’t read all the ice-cream and froyo flavors—even though they were all listed in good plain English right there in front of them. And those wailing kids! I mean, what kind of parent sends their kid off to the ice-cream stand unaccompanied?

These days, are you so darned busy down there at the border that you hardly have time to catch up on the news headlines, to get the national or big picture view?

Let me fill you in, Mr. Ice. I’ll keep it simple and stick with our ice-cream stand analogy.

See, from where we sit, as you try to keep up with the ice-cream scooping, the electricity keeps going on the blink. Now, we all know that the central power supply has always been dodgy—especially since the new boss-man took over in January 2016. These days, it just keeps cutting in and out, and the flavor menu keeps changing every day, until nobody—probably not even you and your colleagues—knows what’s what.

Then, while all that chocolate and vanilla and raspberry mush into one hot, soggy mess, your boss-man cannot stop by or dispatch a qualified electrician. Meanwhile, the clock ticks and the mercury rises and the window queues grow longer, and amid all this, here comes the boss-man’s wife. Rather than bringing a few new electrical fuses, she’s sporting a cheap jacket that says she just doesn’t care.

Hey. Hey! Mr. Ice, calm down. Please. I didn’t mean to flash you back to that frantic summer job again, but now that you’re a grown-up in a real job with federal benefits, you need to see what I see.

You also need to know what it will look like two decades from now, say, in 2038.

Mr. Ice, when I look at that photo of you and Boy Number 47, I find myself fast-forwarding to our future school history curricula about what happened during the darkest days of the 21st century.

As the music fades and the documentary film starts, there’s a frame of you, Mr. Ice. Now you’re a retired, octogenarian version of your current self. You’re wearing a buttoned-up cardigan and your comfy Docker trousers—all dressed up for the TV camera.

“I was just following orders,” you tell the interviewer and all our future kids and students in their 2038 classrooms. “Back then, we didn’t make those rules.”

Will our kids buy it, Mr. Ice?

No. They’ll equate you with all the other tyrants, the folks who willingly chose this job, who signed up to earn a living, who fed their American-born families by visiting hellish cruelty upon other people’s families, upon Boy Number 47 and 48 and 49 and 50.

I’m just writing it like it is. Like it will be and how it will be for you.

Let’s close this letter on a bright note, Mr. Ice.

These days, they assure us that we have the highest employment rates in recent American history. Baker, carpenter, teacher, nurse, fireman, truck driver, biotech engineer. In this land of opportunity, the job choices are there for the taking.

So I beg you to take another look at that photo of you and your colleagues and Boy Number 47. Listen—really listen—to what your soul is telling you. Then quit. Oh, and while you’re at it, bring your two colleagues from that photo and a few dozen other I.C.E. men and women, too.

“Children in cages. Dear God, what have we become?”