Eating away our Emotions: How I filled my Internal Void with Food. 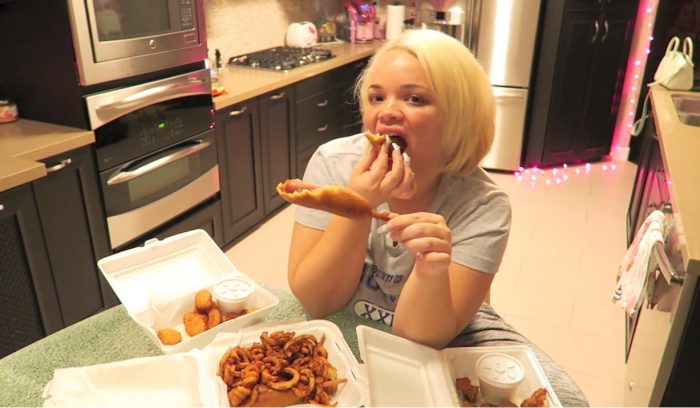 The experience of eating is one of the greatest releases I know.

I was socialized to smile when my gut says scream, to ignore that intuitive feeling brewing in the depths of my stomach in favor of “going with the flow” and being liked at all costs.

I have learned to process this internal duality by bingeing.

In a life where I feel I must maintain a constant outward image of being in control, eating is one place I can let myself lose that control.

Although I became conscious of my own binge eating disorder toward the end of high school (characterized by eating large quantities of food, then restricting food intake entirely while experiencing feelings of shame and guilt for indulging in food), the pattern of using food to cope is one I’ve had for as long as I can remember.

For a while, I thought I was completely alone in this addiction and it was something I had to overcome purely with willpower. I felt weak for having so many emotions related to the act of eating.

The times I did attempt to come forth, I would often be met with a comment such as “Don’t be ridiculous Anna, you’re thin!” or “Oh my gosh shut up and treat yourself!” or simply a trite chuckle and “You’re allowed to enjoy food” before moving forward with the conversation.

Comments like these directly condense a lifetime of food addiction into a silly obsession. They not only trivialize the cutting pain of addiction, but can also make the receiver of the comment feel crazy for having the struggle at all. And a struggle without a name is all but impossible to overcome.

For me the pattern looks like this: an intense pulsating excitement before eating, bliss while eating, and then a feeling of emptiness, often accompanied by a longing sort of melancholy after eating. The irony of experiencing emptiness directly after filling yourself!

In Florence and the Machine’s new song “Hunger,” not only does she open up about her own eating disorder but the most repeated line is also “we all have a hunger.”

The question is, what is this hunger for and why do so many of us spend lifetimes filling it with an antidote that continually leaves us empty?

Anita Johnston writes in her book Eating in the Light of the Moon that this sense of emptiness is a spiritual longing, a cry for one’s passion and purpose, a craving to feel forbidden emotions, a profound ache to step into one’s life fully and be who one wants to be free of inhibitions. She emphasizes that “eating is not the problem,” but rather food is what we logically use to fill a hunger we can’t name. She assures her readers that every emotion we feel, every emotion we may stuff down with food or ice out with deprivation of food, is a story that wants to be listened to so it can unfold and release.

But growing up in a society where violence is normalized, money is overvalued, and productivity and instant results are emphasized, many of us have learned from a young age to suppress our feelings, labeling emotions like anger and loneliness as “negative” and happiness and contentedness as “positive.”

We then often conceal the negative and exaggerate the positive because this society does not allow time nor space for us to slow down and learn to feel and trust our emotions—scary ones included. When such patterns of suppression have been paved since childhood, it’s hard to convince our minds that it’s okay to let these powerful sensations pulse through us.

So it follows that many of us have turned to food, or food deprivation, as a means of release.

Consolingly, Johnston suggests that maybe eating wasn’t the worst vice we could have chosen to get ourselves through severely painful moments of our lives. The comfort we, I, have found in food for so long was a means of survival in a world that doesn’t support the livelihood of “wild women.”

A wild woman, as proposed by Clarissa Pinkola Estés in Women Who Run with the Wolves, is someone whose authentic way of being is too eccentric, vibrant, or different to be accepted within or supported by the dominant culture’s norms. Although the term uses “woman” in its formation, the concept can be applied to a person of any gender identity.

Estés proposes creative agency as the antidote to addiction—that stoking our own creative fire will fill us with the energy we seek in whatever vice we have chosen.

True to her word, getting in touch with my own creativity and beginning to unleash it, if even just for myself, has been and currently is essential to my healing journey.

As I type this article, I am sitting in a café and feel the pull of food captivate me as I bite into a cookie and sip a cup of coffee. It can be frustrating when we’ve done countless hours of work on a painful pattern in our lives and still, years later, strong elements of that pattern remain.

But as the musical sister duo Rising Appalachia sings in their song “Wider Circles”: We’ll know the shape of progress, like nature, is always round. So even if I encounter this tendency to cling to food and think that it is the height of my happiness a thousand times over, if I approach it each time with a little more love, acceptance, and breath, I trust I am taking steps on the round path of healing.

If you are wrestling with any form of disordered eating, whether diagnosed or not, know that you are far from alone in your struggle and that freedom from the grips of food obsession is within your reach.

Let go of the fear to share your struggle while you’re still in the throws of it because sharing just may help you climb out. When we realize that vulnerability is strength and muster the courage to bring forth our authentic stories, people listen. And being heard can help fill part of the hunger we hold. 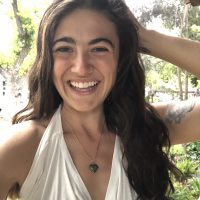 Intuitive Eating: 5 things that happened when I Stopped Obsessing about Food. From one Food Addict to Another. Confessions of a Food Addict. Why we Self-Medicate, Punish & Reward ourselves with Food—Healing Disordered Eating.
See relevant Elephant Video

How to Bike Everyday.