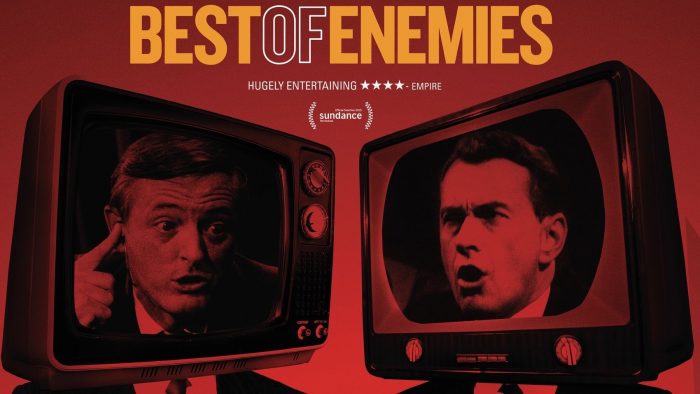 “As far as I can tell,” exclaims Gore Vidal, “The only crypto-nazi I can think of is yourself.”

There’s a momentary pause, as the announcer tries to maintain order…but there’s none to be had.

“Now listen, you queer!” Buckley replies, boiling with rage and nearly foaming at the mouth. “Stop calling me a crypto-nazi, or I’ll smash you in your goddamn face and you’ll stay plastered!”

The voices are drowned out in a sea of obsenity and chaos.

This colorful moment, broadcast to swarms of the country during the 1968 Democratic National Convention at the dawn of the television age, would mark a key shift in how this country would treat the relationship between politics and media.

As the country was being “split at the seams” by the controversy of the Vietnam war and the rise of the hippie movement, there was an unholy union being formed under the surface between identity and policy—one that would lay the groundwork for a future of identity politics and cultural polarization in this country and the entirety of the Western world.

That is our present situation.

I recently sat down and watched a 2015 documentary called “Best Of Enemies,” which follows the televised debates of Gore Vidal and William F. Buckley during the 1968 presidential campaigns.

To be honest, I watched it twice. Not only does the film perfectly capture the ethos of that period, but it draws a clear line between the strife of mid-century America and the formulation of modern culture—with all of the controversy, conflict, and absurdity that we’ve become so accustomed to seeing in politics and media.

The battleground had been set. Each night, these two elegant and bombastic thinkers, true “men of their time,” pinned their political knowledge against one another in a war of rhetorical wit—both having their moments through the series of debates.

Although, on the surface they were scuffling about Ronald Reagan’s character or the Vietnam War, a much deeper battle was going on.

They were fighting over who was the better man and what kind of people we should be moving forward.

They both knew that the country could not continue on the path it was without a profound change in cultural personality, and each man was trying to make it known to the millions of people tuning in every night that their own vision of America was the superior.

Ultimately, their series of arguments culminated in the famous “crypto-nazi” moment, which neatly encapsulated a new form of entertainment that has come to take the place of authentic political discourse.

This adversarial debate format met a deep cultural need to put our ideological combatants to shame in the most public of setting of them all: television. This was the birth of modern identity politics, which has only lead to a more polarized and unsustainable cultural paradigm—one in desperate need of changing.

Interestingly enough, both Vidal and Buckley recognized the danger of television and its role in shortening our attention span to absorb a much lower quality of information—in spite of their contributions toward the medium.

Vidal remarked near the end of the debates, “I think these great debates are absolutely nonsense. The way they’re set up there’s almost no interchange of ideas, very little even of personality. There’s also the terrible thing about the medium in that hardly anyone actually listens. They sort of get an impression of somebody and believe they’ve figured out just what he’s like by seeing him on television.”

I think the real problem of politics today is that we don’t really see each other.

We assume that anyone whose beliefs conflict with ours must have something morally wrong with them. It’s become almost purely about identity, what we feel our personal role is in the political landscape of the country, as if our ego could actually change anything in the world—rather than simply paying attention to the facts as closely as possible and voting on policy.

We’ve lost our cohesion, our sense of being a unified country, and I believe it’s a direct consequence of the role media has played in dividing the American public.

Very few young people may have heard of Vidal or Buckley, but they’ve affected our lives in more ways than we can imagine. The series of fiery and mesmerizing debates signaled a new wave of political entertainment, separating us from actually changing policy and confining us to the realm of identity.

I wish everyone could just chill the f*ck out, but that would be a childish expectation. The only thing we can do is question our deeply held assumptions, particularly if they have a historically personal aspect to them, and learn to engage with people who we might fundamentally disagree with.

We have to believe in the power of coming to a consensus through honest speech, if we have any hope of improving our current situation.

We can’t go back in time and change our history—for we are the walking embodiment of our history. We carry our history with us, through all the days of our lives, no matter how ignorant of that fact we may be.

Though, what we can do, and perhaps the only thing we can do, is raise the bar and live by example.

Go out of your way, either online or in person, to have an honest conversation with someone we’ve deemed as “other,” our beloved political adversaries, presuming that they might know something we don’t. Also, recognize the power of our mediums of communication, and how they, in fact, transform the messages that we receive.

Ask yourself constantly: “Am I upset because it’s necessary, or because it makes me feel good?” Shift from identity to policy, concerning ourselves with the real-world manifestations of bad ideas, and learning to combat them not with outrage, hatred, or indignance, but with well-researched and pragmatic ideas. In other words, good ideas.

Don’t allow this desperate need we have for immediate answers to pollute the airways more than they already have been. Participate joyfully in the sorrows of the world, which is to say, bring the little bit of common sense that we all have as a birthright to a complicated and painful reality that we or someone else faces, allowing it to shine through the chaos, revealing the proper path to us all.

Don’t believe the lie we are told by the media that the more upset and self-righteous we get from a piece of news, the more will likely it will be solved. If that were the case, the world would be a shining diamond. The conversation in our culture is in desperate need of change, and we can start right now by changing the conversation that’s taking place in our minds—for the world is a reflection of ourselves.

To finish off, the film presents an eerily familiar view of a future none of us ever wanted, sending us off with the following quote:

“The ability to talk the same language is gone. More and more we’re divided into communities of concern. Each side can’t ignore the other side and live in its own world; it makes us less of a nation. Because what binds us together are the pictures in our head, but if people are not sharing those ideas, they’re not living in the same place.”

Sometimes it feels that although America is one country, one land, one home, we are not the same here.

Simply because we have lost the ability to speak with each other like adults.

How can we find the Truth when Everyone is Biased?