Is Co-Sleeping with your Baby Safe? An Ayurvedic Perspective. 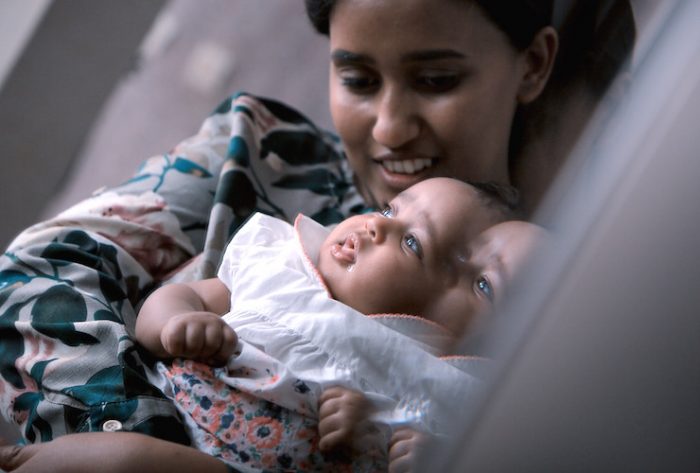 When I first met my Ayurvedic teacher in India in 1986, I remember meeting his wife and three children. They lived in a one-room home with one bed in the corner.

I was joking with him about how he was sleeping in such a small bed—with all five of them!

For him in India, most of the developing world, and throughout the history of our evolution, parents would sleep with their newborn child right between them.

Today, some 40 percent of the cultures around the world practice bed sharing with their babies.

In these cultures, it would be an outrage to be told they should not sleep with their babies—totally unheard of!

Anthropologist, James McKenna—who studied infant sleep for 40 years—said that human babies are contact seekers. What they need the most is their mom’s and dad’s body contact, and that it is good for their physiology.

His sleep studies on mothers co-sleeping with their babies reported many positive outcomes. Here is a snippet from an article where Dr. McKenna was interviewed:

“What McKenna found was remarkable. When the mom is breastfeeding, she essentially creates a little shell around the baby.

‘The mother naturally arches her body around her baby,’ McKenna says. ‘She pulls up her knees just enough to touch the baby’s feet.’

‘It contains that ‘swoosh, swoosh’ sound,’ McKenna says, ‘which in turns sounds like, ‘hush, hush little baby.’ It’s no wonder nearly every culture uses a swooshing sound to soothe a crying baby.’

The baby also feels the mom’s warm breath, which creates little clouds of carbon dioxide around the baby’s face. That may sound scary, but the gas stimulates the baby’s breathing, according to McKenna. It pokes the baby and says, ‘Hey, take a deep breath.’

And then there is the baby’s and mom’s movement. McKenna found that throughout the night, breastfed babies in the study don’t move all over the bed, willy-nilly. Instead newborns stay laser-focused on one location: ‘The babies are basically staring at their mother’s breast almost all night.'”

Today, the practice of sleeping with your baby is not recommended by the American Academy of Pediatrics (AAP) as a result of studies linking bed sharing to an increased risk of infant death from sudden infant death syndrome (SIDS), accidental suffocation, or accidental strangulation.

As a result of the early recommendations that bed sharing would increase the risk of SIDS in the 1990s, babies were commonly put in cribs in a separate room from the parent, often with an intercom to help monitor the baby. One parent told me they kept the baby’s crib in the basement with an intercom because the baby’s crying would wake up the husband.

Thankfully, those rules have changed based on the science that suggests keeping the baby in the room close to the parents in a crib decreases the risk of infant death by 50 percent.

Today, with better information on safe bed sharing, there are more and more mothers bringing their babies into their beds.

From 1993 to 2015, the number of parents sleeping with babies in their beds increased from 6 percent to 24 percent.

Your child is significantly more likely to get struck by lightning than die of sudden infant death syndrome.

These number can be dramatically reduced if you follow the safe bed sharing guidelines set by the AAP which include:

According to the conclusions of one report, “Some consider it a significant risk factor for sudden infant death syndrome (SIDS) and argue for its wholesale elimination. Others disagree, finding little or no scientific evidence for an association with SIDS, except among smoking mothers.”

Another study concluded, “There is low-quality evidence that bed sharing is associated with higher breastfeeding rates at 4 weeks of age and increased risk of SIDS irrespective of maternal smoking. Due to the paucity of studies, it is difficult to predict whether neonates are at a more risk than older infants (>1 month age). We need more detailed studies that look at bed sharing, breastfeeding, and hazardous circumstance that put babies at risk.”

My wife and I have raised six children and all of them slept with us. At one point, we had a twin mattress at the foot of our bed and another at the side of our bed for the toddlers, all while my wife was sleeping and nursing the baby between us.

In my practice, I have seen many moms who had babies who would not sleep or would cry all night, and when they brought their babies from the crib in the next room into their bed or next to their bed, it made a world of difference.

I am a deep sleeper, but I remember keenly that I was always aware enough of where that baby was while we slept. More often than not, they kept one of their infant feet poking my back throughout the night. I was never sure if that poke was them saying, “Get away from my mommy, dad,” or, “I love you too, but you don’t have any milk!”

Bottom-line: This is a personal decision, but one that every parent should make in a fully informed manner. I hope this article helps with your process.