Tourists are Crippling the Donkeys of Santorini. 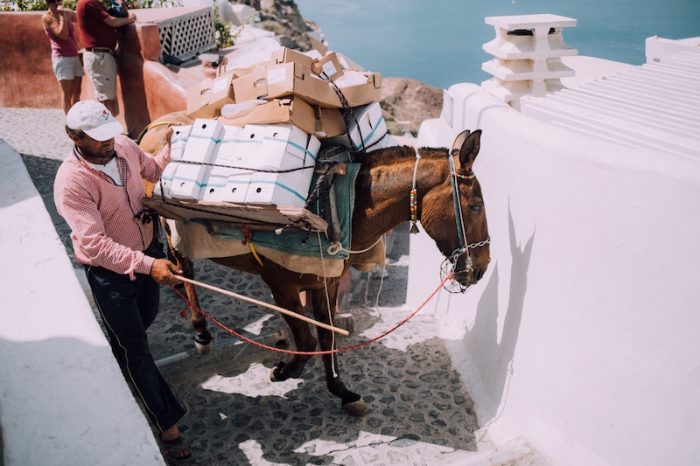 “The greatness of a nation and its moral progress can be judged by the way its animals are treated.” ~ Mahatma Gandhi

Santorini is stunning, and is known to be one of the most romantic destinations in the Greek islands—possibly even the world.

It was voted one of the world’s most beautiful islands, with its giant cliffs that rise high above the crystal clear water of the Aegean Sea.

As picturesque as it may appear from the outset—boasting an optimal spot to witness breathtaking sunsets—it is also attracting widespread criticism. Santorini is home to unimaginable cruelty, due to the tradition of using donkeys as a method of transportation.

Two million people are said to visit this spectacular destination every year, and it was originally built with the assistance of donkeys. Approximately 360 donkeys are still used as tourist “taxis.”

Sadly, many people, particularly from the United Kingdom, the United States, and Russia, seem to think it is customary to board a gentle donkey and let it carry their weight up and down a cobbled zigzagging trail. The walk is only half an hour on foot, and there is also the option of a quick cable car ride, but an excessive number of tourists prefer the option of being carried on a donkey. They allow it to struggle to climb up and down the route to the town, causing it injury, and crippling it in the process.

One of the main reasons donkeys are in such high demand is due to the ferry port seven kilometers south being unable to accommodate cruise ships. Therefore, thousands of passengers arrive at the dock area every week. Some cruise ships carry more than 2,800 passengers, and several of them can arrive at the port each day. However, the cable car can only move 1,200 people per hour. This leaves the rest to either trek by foot or hire a donkey to carry them up—and then back down—the cliff.

People seem to ignore the suffering that is being inflicted on these gentle creatures. Animal welfare groups and many cruise ships say they attempt to discourage passengers from riding the donkeys. Meanwhile, pressure is being put on travel operators to raise greater awareness.

Donkeys are only meant to carry approximately 20 percent of their body weight, yet these beautiful, sentient creatures are forced to carry humans up and down the Karavolades stairs. This route consists of 520 white cobblestone steps that wind from the old port of Fira into town. This ascent can be tough to climb up and down even once a day, but donkeys are forced to continuously do this journey, normally four to five times per day, in temperatures up to 86 degrees Fahrenheit, without adequate water, rest, or shelter from the blistering sun.

Part of the reason donkeys are so commonly used in Santorini is that it has restricted infrastructure, with narrow lanes and steep ascents that are often overcrowded, which many visitors to the island seem unwilling to tackle on sun-drenched days.

The island has become increasingly popular, which puts pressure on the islanders to swiftly move tourists from one part of the island to the next. This helps to ensure that the visitors and the islanders can make the most out of their visit, as almost half arrive by cruise ship for day trips or short-term stays.

Heartbreakingly, it is not just during the summer months that donkeys have to endure these unbearably exhausting and painful working days, as the holiday season on this island lasts far longer than it used to. Even when they aren’t carrying humans, they receive little to no respite, as they are then used as a form of transport for heavy sacks of rubbish and building materials.

Animal campaigners on the island claim that, due to carrying weights far greater than their bodies can bear, the donkeys end up with spinal injuries, and have open wounds due to poorly fitted saddles.

Despite an international code of practice for working equines that was signed by officials in 2008, there has never been an appointed body in place to enforce the regulations. This means that the owners of the donkeys can work them into the ground until they quite literally find it too unbearable to stand. Their fate is said to end with them being abandoned and left to die, or even pushed over cliff edges.

Overall, people need to understand that if it is a struggle for them to walk the distance, imagine the pressure, pain, and suffering they are inflicting on another living being. The donkeys not only have to walk carrying heavy weight, but have to repeat the journey many times over, each day, in unbearable conditions, for the entirety of their lives.

On July 28th, Santorini town hall issued a statement explaining that a meeting had been held with animal rights groups and animal owners to ensure “respect for the rights and well-being of donkeys.” The town hall also stated that a series of measures would be put in place to ensure that animals would be kept in the shade during rest periods and would receive plenty of water and food. Load weights and work hours would also be limited, while owners who mistreat animals would receive bans.

The Greek authorities decided that they needed to act fast following protests, adverse publicity, and widespread outrage when a video emerged showing a donkey in Santorini struggling to walk and bending under the pressure of the weight it was carrying. The clip quickly went viral after it was uploaded onto Facebook, and was viewed by over one million people. The caption on the video stated, “Santorini 2018…this is who we are…poor donkeys…I wonder if those donkeys are the real animals in this island…”

As with many situations when it comes to the abuse of animals, it can be almost impossible to get those who are making money off animals to change, so it is left to the consumer to change their own thinking and choices. If there were no demand for donkey rides, there would be no financial benefit for using animals for entertainment, pleasure, transport, sport, food, products, or clothing.

Animals are vulnerable—they do not have voices and cannot protect themselves, so we have to create enough awareness so that no animal ever has to suffer at the hands of humans.

For more information about animal welfare groups working tirelessly to eliminate the suffering of these animals, visit The Donkey Sanctuary or the “Help the Santorini Donkeys” Facebook page.

“We have to speak up on behalf of those who cannot speak for themselves.” ~ Peter Singer, Animal Liberation