No, I Do Not Have Proof. 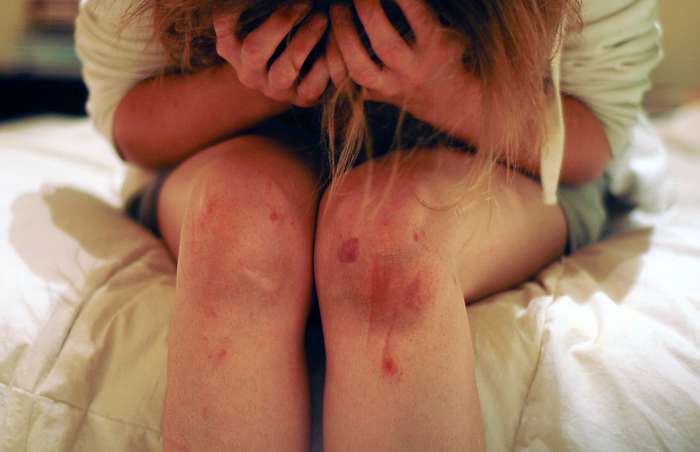 I do not have proof.

I was six going on seven. I remember what time of year it was—summer—and I remember it was at a party or maybe it was a picnic. I remember it happened in my own backyard behind my house.

It happened with people laughing and talking and drinking in the distance—not watching, but right under their noses. It happened in the woods, in broad daylight.

I remember it was quick. I remember his mouth coming down on mine, how he grabbed and squeezed my little girl face. I remember being pinned against a large rock. I remember his hand, how he put my small hand beneath his big one, and worked himself over. How he shoved his big fingers up inside me and told me I would like what we were doing a lot more when I was older.

This memory is graphic, and seared into my brain—but no, it isn’t proof.

I remember running away and hiding in my bedroom. I remember that I couldn’t breathe, I couldn’t get enough air, and I wanted to vomit, so I did, right in my mouth—the taste sharp and sour when I swallowed it back down.

I remember how terrified I felt. I remember being mute, unable to speak, holding my words hostage inside my belly, a belly filled with bile. I remember I had no idea what the f*ck just happened to me. Or why it happened.

Because I was six.

Does it count if I remember this? Will you believe it happened if I told you exactly what he said? How he snarled and told me he would kill me if I said anything to anyone? How he called me a f*cking brat as I ran away from him? Does any of that count as proof?

But no, I don’t have proof.

Tell me, was I supposed to keep my underwear locked in a box, tucked away like a keepsake so I could pull it out in the future to prosecute my attacker, someone I knew, someone who would deny my story, call it crazy, call me crazy, and tell everyone I was lying?

Was I supposed to ask someone how to spell his name so I could write it down on a piece of paper? A piece of paper I could put inside the box, pinned to my underwear? Tell me, what was the best way for a six-year-old to handle the situation?

I can tell you how I suppressed it, though. How I buried the memory. How I held it down, muffled it so that it wouldn’t kill me. How it tried to kill me for years and years, and how I fought with it—my demon memory. How I carried it around inside my body. How I ate and ate and tried to stuff it down in order to control it.

And how it just kept coming back up again. How it still does.

If a branch fell on a woman walking alone in the woods, and she told you about it 32 years later, would you believe her? Maybe you would because she could point to a scar on her arm, if she had one. If she had a scar, one that you could see, she could call it proof.

7.6 billion people inhabit the planet. Roughly half are women. One in four women and girls have been or will be sexually assaulted, which is close to one billion women.

When will one billion women be enough proof?

We don’t carry proof around in our purses waiting for just the right moment to “ruin” our attacker’s life. We carry it in our hearts and in our heads.

Our assaults come along for the ride in every relationship we ever have. We carry them on our hips and in our bellies when we turn to food to cope. We carry them in pill containers and wine bottles. They sit next to us in AA meetings. They’re tucked into the folds of our divorce papers.

We carry them like rocks in a sock and we wield them as weapons with our sudden bursts of pent up anger and unexplained rage.

We are labeled moody and troubled and bitchy and unpredictable. We put our proof in a bag and we drag it to our therapy sessions where it sits on the floor, heavy, next to our feet. We pass it down to our children, our daughters—like toxic heirlooms.

Our dysfunction, our depression, our damage are the gifts that keep on giving.

Don’t talk to me or any other survivor of sexual assault about proof. Proof is often invisible, but we are not. We are right under your noses.

Proof is in the moment that haunts us forever, the thing we cannot forget.

We do not “have” proof, we are the proof. Because we were there one billion times over.