It took my friend six weeks to die.

Cancer had spread from her lungs to her brain. Ten years earlier she had a double mastectomy and multiple rounds of chemotherapy. She had beaten breast cancer then, which made the diagnosis of her brain and lung cancer seem that much more inexplicable.

I was at her funeral, listening to a priest recite prayers that I’ve known since I was a child. He ended his eulogy by announcing that, “Today is a day of faith, not logic or reason.”

The priest said this again and then repeated it several more times. It was supposed to be the answer to hypothetical questions that he threw out to those of us gathered at the service: Why did she have to suffer? Why did her cancer return? Why did she die so young? Why does it seem that some people suffer so much and others not at all?

We all suffer. The thing is that some people’s tragedies are heartbreakingly public, while others’ remains hidden. Suffering is an inevitable outcome of our mortality. It’s the price we pay for being living, breathing, eating, sh*tting biological organisms.

It’s the outcome of engaging in a world that’s chaotic, changing, and beyond our control. It’s the consequence of both our dependency on and independence from others.

We all suffer—physically, mentally, emotionally, and spiritually. As Jon Kabat-Zinn says in his book, Full Catastrophe Living, “The body has no monopoly on suffering. Emotional pain, the pain in our hearts and minds, is far more widespread and just as likely to be debilitating as physical pain.”

Suffering, then, is an inevitable part of life, but not the sole experience of it. So what exactly was this priest asking us to do when he asserted that, “Today is a day of faith?” Was he asking those of us present to find meaning in my friend’s suffering, as if somehow her illness and death served some greater purpose?

Looking over at her husband, I knew that he didn’t need to watch my friend die in order to realize the extent of his love for her. He loved her completely. He cared for her at home until she passed, honoring her wish for privacy and her desire to die in the home they built together.

What is the purpose behind taking that kind of love from the world?

Faith is a Heart-Centered Practice

Pali, the language of the original Buddhists texts, refers to faith as saddhā and translates to, “To place the heart upon.” In Sanskrit, faith is referred to as śhraddhā, an inner devotion toward the Buddha and his teachings.

In both contexts, faith is a heart-centered practice, one in which we give our hearts over to an experience. We do not do so blindly, however. In Buddhism, faith is concrete—based upon personal insight and experience. Faith is present in the realization that we all suffer.

Faith is also present in our willingness to accept that there might not be any purpose to our suffering and that it lacks intrinsic meaning. Yet, like a riddle, Buddhism also teaches that it is through the acknowledgment of our suffering that we are ultimately liberated from it.

As humans, we give suffering purpose and meaning in our quest to answer the question, “Why?” Faith therefore exists in the acknowledgment that not all of our suffering has meaning or a greater purpose. In fact, a good portion of it doesn’t.

Accepting that suffering is without greater purpose or meaning, frees us. It frees us from reactivity, from taking things so personally, from developing the mindset of “for me” or “against me.”

We exhibit faith when we realize that the person who is a challenge for us, who creates difficulty for us—the boss who constantly ask us to work late, the spouse who is emotionally distant, the sibling who has been favored since childhood—suffers too.

In acknowledging that they also suffer, we can be more empathetic and patient, realizing that just as we are trying to find happiness in our lives, so are they.

Even when it seems as if the person causing us to suffer does not suffer, we can have faith in the existence of their suffering (not that we desire them to suffer, per se, but just that their suffering exists.)

In his book, The Heart of the Buddha’s Teaching, Thích Nhất Hạnh notes that the Buddha taught us that to suffer and to not know we are suffering is more painful than a mule carrying a heavy, burdensome load.

Rather than believing that we suffer while others don’t, and feeling resentment, bitterness, and anger, we can simply acknowledge that they may be suffering in ways that they are not aware, and that doesn’t lessen the tragedy of their suffering.

Faith in the universality of suffering and the lack of intrinsic meaning to our suffering frees us from the expectation that we will or should find value in our tragedies and heartbreak. This, in turn, lessens a type of victim-blaming that sits in judgment of those who are unwilling or unable to find meaning in their suffering.

We’ve all had experiences of well-meaning people responding to moments of pain and struggle with, “It’s for the best.” But, like my friend’s husband, left in his sorrow—is it always?

We do not suffer because we are innately bad or flawed. There are not those who deserve to suffer and those who do not—we all suffer.

When we believe that we have nothing else in common with another, when we view someone as “other” because of their race, religion, gender, sexual orientation, political views, or because of personal reasons such as betrayal or loss of trust—we can have faith, and with it, hope, that we share at least one thing in common—the experience of suffering.

Meditations on loving-kindness can help soften us to our suffering and to the suffering of others. Recognition of the universal nature of suffering—and faith in the existence of this shared human experience—can depersonalize and lessen the pull of wanting to stay stuck in our suffering.

If suffering has nothing to do with whether we are good or bad, right or wrong—but simply is—then we can meet ourselves and our suffering with a sense of tenderheartedness that extends to others. 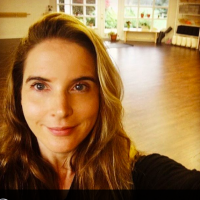