What a False Prophet, Nasty Guru & a Bliss Babe taught me about Self-Love. 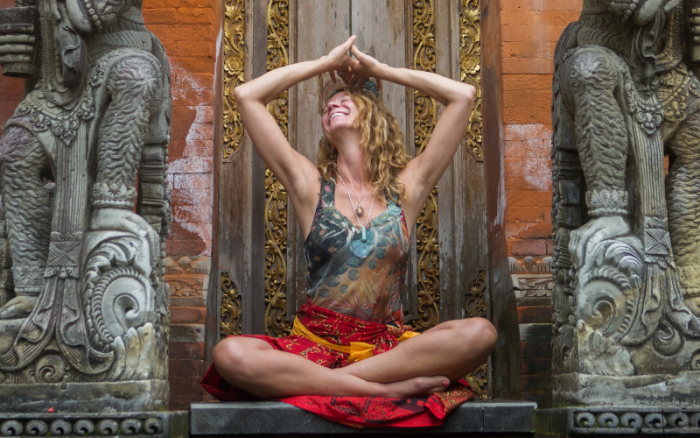 Nothing is static, especially enlightenment.

Awakening to our true nature does not mean liberation from one’s personality (and its shadow), but rather, a new relationship to it.

I learned both of these in the seven years since an overnight spiritual awakening, which catapulted me into a surreal peace, followed by years of hyper-synchronicity, and rare, but intense, episodes of suffering.

The other day, a friend asked me in a private message: “But I wonder about the shadow—what do I not see? What does she hide from others? Are there things she rejects about herself? How would that play out?”

Well, in full disclosure, let me answer these questions.

What I hide from others.

If I am like you, I hide my greatness most of all. I hide it from myself and then project it out into the world in the form of a superhero whose presence I can bask in with gratitude for my great luck and privilege.

In exchange, I expect nothing less than perfection.

My first encounter around my own hidden greatness was a year long relationship with a guru figure. This was especially out of character for me. I refused to be pigeonholed into the label of devotee or follower—instead, I told myself I was friend and supporter.

Yet, this was no casual love affair.

When it went south, it did so with the all the drama of a first-rate soap opera.

In my view, he was the villain—the one who morphed from a beloved figure into a controlling, autocratic, and demanding narcissist.

My shadow? Imagining virtue in being right and believing facts could save the day.

There was a part of me that confused facts for truth, and that by painfully and repeatedly illustrating to him and others that I was being wrongly accused, I would be rightly justified.

I look back now and see the many gifts of this shadow dance.

The biggest of which was the death of my inner trial lawyer. Meaning, even if his facts were wrong, there was some truth in his attack on me—I acknowledged that I was a lazy and half-hearted student, and could not commit to him in the way he wanted me to.

Facts are a sledgehammer whereas truth is a feather. If you feel clobbered by someone wielding facts, you can pretty well assume they are missing the mark. If you are doing the clobbering, step back, breathe, and wait for the feather to appear in your hand.

Then, and only then, apply truth gently.

What do I reject in myself?

If you are like me, you reject your most brilliant and blazing gifts.

And because these gifts are pushed down below the surface like a beach ball held under water, eventually they surface with a splash.

A breaching gift can look wondrous or hellish depending on whether the surfacing is invited or uninvited.

I can be a compelling and charismatic leader—it’s one of my gifts. I can turn it on or off at will. I turn it off (or press it underwater) when I am afraid I will lead people over a cliff or direct them down a treacherous path that I would not myself travel. In other words, that I would lead someone astray.

For years, I kept the charm mostly off from a fear of being a reckless pied piper.

Then one day a few years ago, I met a woman who was a far more charismatic and dangerously careless a leader than I ever imagined or feared I could be.

Yet, at first glance she projected the aura of a bliss babe and her brand was unconditional love.

I fell so deeply under her spell that I invited her to live in my home.

In domestic proximity, I saw the bliss babe mask fall away. I was confronted with a manipulative and angry woman in its place.

The contrast was stark, and in the weeks it took for me to ask her to leave, I began to see how this contrast was my worst fear about myself—that my capacity for magnetic leadership might be matched by a talent for manipulation.

It took seeing my shadow play out before my very eyes to recognize that, while I can and do have the ability to calculate, plot, and ploy, I also have an equal capacity to witness this shadow part and keep it in check.

What do you not see in me?

Many of us can’t even begin to guess what others see or do not see in us.

All we know is what they do not see in themselves.

I had the recent experience of being around a man who believed himself to be a prophet.

His mask was that of humility and earnestness. He promoted a brand of prophecy hitched to the mechanism of synchronicity. Synchronicity is my thing, so I jumped on his bandwagon for a few months, happy to play along.

Then one day, things began to shift: he declared himself the new “lawgiver” with signs for all. If you didn’t buy in, you were out of the grace field. If you doubted, you were under the influence of a mind parasite. Bottom line message: don’t trust your own divine uplink—trust mine.

This Moses complex took me by surprise and so I began to talk.

I prodded him with questions until he snapped: the mask of peaceful prophet fell away and, in a rage, he accused me of being a fraud and worse.

After the shock wore off, I realized what he saw in me was his own shadow.

He saw his own fear (or knowing) that he was a fraud. And at the same time, I was given the gift of inspecting my own fears of being fraudulent, of not being transparent, and honest.

There are days where I feel I need to hide my emotional struggles or put on some lipstick and blush to distract from my exhausted face, or to be a voice for optimism even when I am feeling pessimistic.

How does it play out?

The shadow of the human psyche plays out the same way—it’s relentlessly predictable.

Just when we imagine sainthood, some crafty, nasty, fearful, ugly, angry, and mean part of ourselves pops out of the woodwork.

This divine play of god is not for the fainthearted.

As we awaken, we begin the courageous journey of self-scrutiny and self-love. Not that new age kind—but the tender love a mother has for her young child or the mirthful acceptance that comes when we can laugh at the drama instead of cry.

Because, at last, we simply do not take ourselves or life so seriously.

And one day, when all you see in me and all I see in you is love, then we have arrived together to what is real beyond our shadows, farther than our projections.

Rumi says it succinctly: “As you live deeper in the heart, the mirror gets cleaner and cleaner.”