A Lesson in Radical Forgiveness.

Years ago, I read an article in the New York Times about radical forgiveness.

The article centered on a couple working to forgive the murderer of their daughter—her boyfriend, whom they also loved. He killed their daughter in a sleepless rage when they had an argument while studying. The couple became the first in the United States to practice a form of restorative justice with a killer, and they spoke poignantly about how forgiveness was an act of “self-preservation.”

Without forgiveness, their lives would have been taken too. The article concluded with the victim’s mother seemingly checking in with herself, to ensure that forgiveness remained, as if indicating that forgiveness is not a onetime deal. Sometimes, it is something that must be done over and over again.

The article has stayed with me, not for the haunting nature of the crime, but because of this lesson in radical forgiveness. Particularly, I was drawn to this idea that forgiveness is not always a singular occurrence—that when despair, anger, hurt, or resentment resurface, it is not a personal failing, but rather, it is an opportunity to expand awareness—to find the depths of empathy and to dig deep into a well of self-love, so as to let our injuries go.

On the penultimate day of my yoga teacher training at Kripalu seven years ago, I fled to a nearby handicapped bathroom during our morning practice. I was angry, frustrated, and confused. I locked the door, fell onto the floor and began to sob. It was then that I heard the words I’d been saying to myself for over two decades: Why am I not good enough? Why am I not good enough?

I knew the source of the words laid with my father, who had died a year earlier. I spent my childhood in a constant state of anxiety, never knowing if I would have a supportive, loving father or the one who, more often than not, became violent for reasons unclear.

Words were particularly dangerous, as sentences could be gymnastically manipulated. As a result, I spent most of my time with him in silence, and when I was old enough, I put the Atlantic Ocean between us. This did not stop him from frequently sending me angry emails, sometimes while drunk, sometimes not.

So, when he died days after my 26th birthday, I felt—relieved. This relief brought with it a series of questions about my own character. I said to my best friend, “I work with young people who have been through worse than this and they still love their parents. Is there something wrong with me?”

She answered, “Your experience is your experience. Your feelings are your feelings. What other people go through has no bearing on what you went through or how you’ve processed it.”

It was only after the relief that came with his death, that I realized how much power he still had over me, how much fear remained in my life even when I was not in close proximity to him. It was only while weeping on the cold bathroom floor at Kripalu that I fully recognized he still had not left my subconscious. This recognition did not, however, lead to radical forgiveness, but rather to further self-work.

Despite having read the profound New York Times article, forgiveness remained elusive. As far as I was concerned, he did not deserve my forgiveness, nor had he ever asked for it.

It took another four years for me to realize, while walking my dogs in a woodland clearing, that what my father did was no longer relevant. I had carried abuse both like a protective shield and like a badge of honor for surviving. All that mattered now was what I did with my experiences, whether I allowed him to continue to haunt me or whether I set myself free.

For when we don’t forgive, we continue to give power to the person or situation that harmed us in the first place—revictimizing ourselves over and over again.

Like the couple of the murdered victim, I understood that my freedom only came with forgiveness. But like them, I’ve come to understand that forgiveness is something that I must do repeatedly.

In that instance, I was met not only with the problem with the friend, but also with the repeated frustration of childhood wounds that continue to resurface, even after I think I’ve laid them to rest.

The real crux of forgiveness is that it is a two-way street: beyond forgiving those who have harmed us, we must also forgive ourselves.

Personally, I have wasted too many precious thoughts, hours, days, and possibly years, holding onto old pains and old stories. Often, I’m not only thinking of what someone else has done to me, but what I might have done differently: Maybe I could have prevented the situation. Maybe if I had just said this. Or done this instead of that.

To dwell on our past errors (if they are even errors) is to do just that—to dwell in the past. Forgiveness, for self and others, allows us to emerge into the present. As the saying goes, forgiveness is giving up all hope of a better past.

To forgive, either simply or radically, is to love yourself—to let go of the safe harbor of anger, to let go of victim identities, to let go of being right, and instead, to be free. 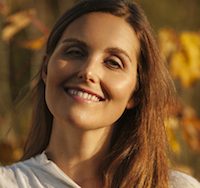 Julie Bolitho is a writer, artist and yoga teacher living in Oxfordshire, England. She regularly writes for Kripalu’s online resources and is currently writing a memoir. Sh… Read full bio