Trump’s Era: The Death of Truth-telling. 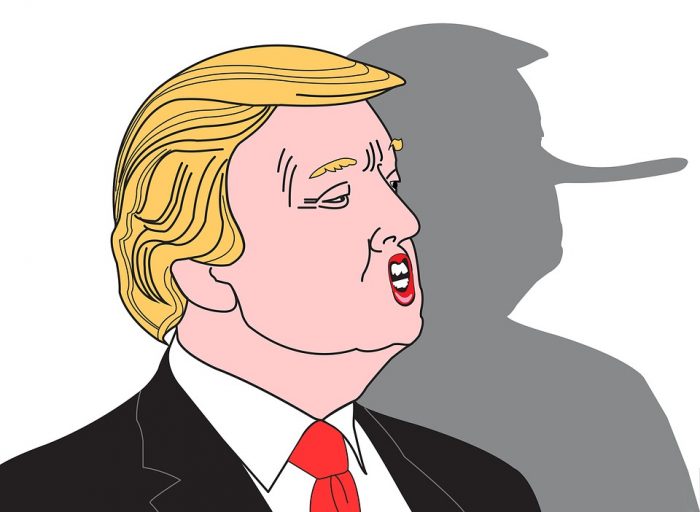 Recently, a man groped a sleeping woman on a plane and attempted to excuse his behavior by saying, “The President of the United States says it’s okay to grab women by their private parts.”

Is anyone surprised? Does anyone doubt that there are hordes of gropers and more serious assaulters with that same mind-set, even if they’re not dumb enough to express it?

For that matter, does anyone doubt the reports that adolescent boys are shouting insults about girls’ appearances, inspired by the Role-Model-in-Chief who gets laughs and cheers for doing it?

It was inevitable. Also inevitable is a deluge of lies and deceit as youngsters come of age in an era when values like honesty are violated daily by the most powerful of public figures and lying is richly rewarded.

If you doubt that, I offer this evidence: Brett Kavanaugh sits on the Supreme Court.

Sick of hearing about the Kavanaugh hearings? Yeah, me too, even though I was in India for the whole spectacle. But let’s set aside for a moment whether or not our newest Justice-for-life sexually assaulted at least one woman 36 years ago. Let’s focus on another implication of his confirmation: it told the world that the United States of America no longer values the universal virtue of truthfulness.

This is no trivial side effect. Truth-telling is not only a central element of civic morality—which is why perjury, libel, and fraud are crimes with serious penalties attached to them—it is also considered a cardinal virtue by every spiritual tradition.

One of the Ten Commandments tells us not to bear false witness. The New Testament is more explicit: “Therefore each of you must put off falsehood and speak truthfully to your neighbor, for we are all members of one body” (Ephesians 4:25). So too is the Koran (9:119): “O’ you who believe! Have fear of God, and be among the truthful.”

The traditions born in India (Hinduism, Buddhism, Jainism, Sikkhism) all hold satya—Sanskrit for truth and generally translated as “truthfulness” when referring to ideal behavior—to be of the highest value. Students of yoga will recognize satya as one of the guideposts to yogic living called yamas, and admirers of Mahatma Gandhi will recognize it as the prefix of satyagraha (truth force), the guiding vision of India’s nonviolent independence movement.

Of course, every system of ethics, both secular and religious, recognizes that speaking the truth is not always the right thing to do; sometimes, honesty can cause unnecessary pain while withholding the truth—even uttering a falsehood—can serve the greater good and protect people from harm. Needless to say, the permissible exceptions to the ethic of truth-telling do not include self-advancement or self-aggrandizement.

Sadly, however, it now seems that even self-proclaimed religious people like Justice Kavanaugh will do or say whatever they deem necessary to achieve social status, professional advancement, or political goals.

In his testimony before Congress, Kavanaugh clearly did not regard the obligation to tell “the whole truth and nothing but the truth” with the sanctity we should expect from someone dedicated to the rule of law. He draped such flimsy veils over his boozy youth—under oath, I might add—that around 75 percent of Americans think he was not completely truthful.

That number has to include a great many conservatives who are nevertheless happy to have a former Republican operative on the Supreme Court. That he now occupies that rarefied air seems to me a sign of ethical decline in America, and it might have ramifications for generations to come.

Why would a high-ranking judge lie to the Senate? The obvious answer is that he badly wanted to be confirmed. But I suspect there is more to it, since he might have fulfilled that goal more easily by being honest, even if he stopped short of confessing to sexual assault.

Imagine if he’d said something like, “I was a heavy drinker in high school and college. My friends thought getting wasted was cool, and we did it a lot. It earned you the esteem of your peers. So did getting sex, whether or not the woman was willing, and we did terrible things trying to get it, things I would not wish on my or anyone else’s daughters. I ask the forgiveness of anyone I may have hurt or offended back then.”

As a culture, we value redemption; we’re willing to grant second chances to the contrite. Had Kavanaugh humbly acknowledged his sordid past and expressed regret, I suspect the public furor would have cooled. Half the country would still have opposed his appointment to the Supreme Court, but they would have done so for ideological and political reasons—not because he blatantly lied and lashed out as if he, not his female accusers, was the victim.

I suspect Kavanaugh was so invested in the squeaky-clean image he had created for himself that he couldn’t bear to tarnish that reputation by speaking the truth. That this highly educated, well-connected, self-proclaimed man of faith would calculate that he was better served by bearing false witness than by telling the whole truth is deeply troubling.

Kavanaugh’s choice will be emulated by others—just as he probably emulated the current occupant of the White House, perhaps under explicit instructions. Trump is a master of denying every accusation, even demonstrably provable ones, mobilizing self-serving lies, diverting attention, and counterpunching ferociously.

He has been doing it since the 70s, and now that strategy is being normalized.

When a chronic falsifier can become president and keep on lying with impunity, when someone can lie to Congress one day and be sworn in to the Supreme Court the next—how can we look kids in the eye and say it pays to be honest, straightforward, and trustworthy?

Maybe the laws of karma will work quickly and there will be obvious consequences for violating the virtue of truthfulness. If not, parents will have to find ways to raise honest kids despite the presence of bullsh*tters in high places. Every culture in every era told stories of men and women who are rewarded for their honesty and others who are punished for telling lies.

What tales do we tell in the Trump era? Already, kids probably think George Washington was a sucker for fessing up about that cherry tree.