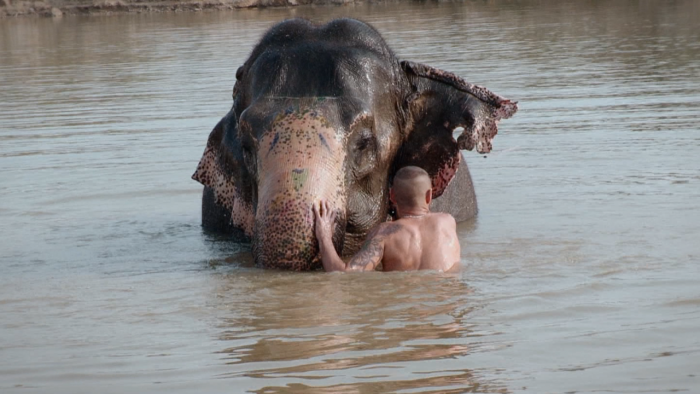 *This article is written by the maker of “Where the Elephant Sleeps,” a documentary on the captivity of elephants in India.

People always ask me how I got involved with animals, and specifically, with elephants.

Not that I would not have an answer, but I always felt that there was something wrong with that question, there was something disturbing. I felt that there should be no separation between us and the elephant—that we are part of their suffering as much as we are their silence. Through our own silence, we are part of the exploitation and slavery of elephants.

Even more disturbing questions that arise: How can you own a big animal like an elephant? How can you put it into a cage? Why is a captive elephant without obvious wounds or injuries not considered at the same level as humans?

Chained, neglected, and misused. Approximately 3,500 elephants are kept in captivity in India. When I started filming the documentary in the Elephant Village Hathigaon in Jaipur in December of 2011, I had no clue where this would go for both the elephants and my personal life.

“Where the Elephant Sleeps” became an enlightening multi-awarded feature documentary about the plights of the Jaipur elephants working for oblivious and heartless tourists lining up at Amer Fort, all waiting to be carried up the Fort on the backs of old, ailing, dehydrated, and undernourished elephants with fist-sized holes in their feet and swollen ankles.

A dead elephant is worth more than an elephant alive. Owners do not care about an elephant once its life cannot be saved anymore. With the support of two organizations on location, Help in Suffering (HIS) and Human Society International (HSI), in the winter of 2011, I instigated the first euthanasia for an elephant in Rajasthan, probably in the whole of India.

Sita was lying on the ground for five long, agonizing weeks until the official papers declared the green light for the final injection. An elephant, once lying down, won’t stay alive longer than maximum eight or ten days. The enormous weight of its body causes such pressure on its inner organs that water in the lungs and a decubitus state of the skin are the common additional causes for the animal’s death. However, Sita stayed alive like this for five weeks, waiting for her official papers to be put to sleep, and my promise to fulfill her destiny: that I would do my best to help lead her brothers and sisters to a better life.

Sita became a martyr for me. Two years later, in September 2014, together with friends, I founded Elefanten in Not (Elephants in Need), a charity in Switzerland, and one year later also an organization in Germany. Insurance companies for elephants pay between 20,000 and 70,000 euros to the owners for their dead elephants. It’s understandable that expenses for keeping the animal alive and medical care are obsolete and counterproductive to spend.

As long as the elephant can be replaced from other wild capture, there is no issue to stress on its well-being. The illegal owners have to confirm a medical checkup to the insurance company shortly before the elephant’s death only. Veterinarians are bribed by a percentage of the amount of the insurance. Overworked, weakness, joint disease, and untreated infections are the main culprits.

Despite the deaths, the elephant population remains stable. A new elephant is quickly purchased before a sick one has even died. The animals are kept in individual pens, where they stand in chains on a sloping, concrete ground. There is no medical care for them, and food is down to the level of keeping them just alive and working hard. The poor treatment—combined with too much strenuous labor at weddings or private events, not to mention being kept on a diet with exclusively cane sugar—makes their stressful lives even more unbearable.

Even from a distance, you can see that many of the elephants are lame: they suffer from arthritic damage in their knees, shoulders, and elbow joints. The highly sensitive, baking tray-sized feet, are the source of many overlooked problems. These include overgrown heels caused by overloading; ingrown and often broken toenails; splits between toes; and cracked soles in which small stones become embedded and cause visible pain and limping.

All too often these lead to dangerous infections and foot rot. Many elephants in captivity suffer from foot rot and ultimately die an agonizing death. This was the case with the female elephant, Sita. Her injuries were caused by the traditionally used bullhook, a metal tool with a sharp hook used by mahouts (elephant trainers) to control their animals; however, often aggressively misused and causing severe injuries, leads to death in most cases.

Owners almost never call a doctor and, as a result, untreated wounds don’t heal properly. Plus, there are other kinds of injuries with lasting repercussions: the elephant’s wounded spirit does not heal either. With a broken spirit, torture in babies four or five years old, they have to bend down to subjection and obedience, and face never-ending trauma throughout the rest of their lives.

If you are planning a holiday to Asia, please don’t go on elephant rides. Instead, I suggest visiting rescue centers, such as Wildlife Rescue and Rehabilitation Center (WRRC) in Bangalore or Chennai. This way, you will contribute to the well-being and care of some severely traumatized animals.

My appeal is to morality and compassion, to education and comprehension for the largest mammal on earth undergoing these cruelties inflicted by us, humans. No one who has ever seen wild elephants in their breathtaking beauty of a natural habitat could or should ignore how we find them in captivity, or what’s left of them.

This is a plight to free elephants from captivity. We, as humans, are involved as much as they are when it comes to think about solutions that lead to regaining the freedom of this giant, legendary herbivore. The answer will be found in taking responsibility for our actions.

*The documentary, “Where the Elephant Sleeps,” is available on Vimeo. The shortened version (40 minutes) is available for free. For more information, you can find our charity Elefanten in Not/Elephants in Need. 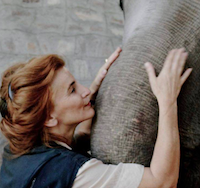