At first, I didn’t quite understand how I could go from enjoying the party and being loud and noisy to being extremely tired of people and not feeling like opening my mouth for the rest of the night.

How could that happen in less than an hour? How is it that one day I am dancing like there’s no tomorrow and having fun in the process, and the next weekend I binge-watch a TV show and have fun not being around people? How is it that I have friends who are so different, those who love talking about books or TV shows while having a good cup of coffee, and those friends who hate deep talks and like it more simple?

Those are some of the questions that ambiverts often ask themselves, and I asked my whole life—until I met this concept.

An ambivert is basically a person who is an introvert as much as an extrovert. I call it 50/50. It was hard for me, because being so insightful always led me to understanding myself, and then becoming a psychologist took me to wanting to define myself. But getting asked if I was either an introvert or an extrovert was one of the hardest questions ever asked, because I never felt more like a thing than the other. I’ve always been comfortable with both.

But there’s also another thing, there are a lot of people that are this way. There’s a little bit of everything, I define myself as 50/50, but others might feel 20/80 or 60/40, and that’s the thing about psychology and human beings—it is not an exact science.

I was so relieved when I understood this. I was not an alien for being both, and I was not lacking personality. The literature says that extroverts get their energy from being around people and introverts from being by themselves. Ambiverts need a little bit of both.

Feeling passionate about people and how they work is infatuating, but so is keeping a safe distance so their emotions are not all over ours. As a psychologist, I love getting to know and understanding how human beings feel, behave, and relate. But I also get drained by people’s emotions, and I need my distance.

Knowing this helped me a lot. First, because now I know what type of distance feels cool for me, and I also know that it is okay to be all lovable some days while also sometimes needing a break from that.

I used to think I got depressed easily or that something was off with me, because as an ambivert, I didn’t quite understand how it was possible that last Friday night I had the time of my life at a party, while the next day just getting out of the bed seemed like a lot of work.

Sometimes we can confuse needing recharge days with feeling sad or depressed. It is perfectly fine if we don’t feel like socializing or seeing people. It is perfectly normal to crave some time alone, with just the company of some pizza and a nice movie or book.

It is possible that ambiverts don’t have an specific type when it comes to relationships. Because of the same nature of the personality of an ambivert, we have more open doors than other people. We can connect with an extrovert as well as we can with an introvert.

This also can make it hard when it comes to finding a love partner. Extroverts may seem too much, and introverts may seem to us like they are missing something. So that could explain why we might be a little bit more complicated. Even though it may seem complicated, this just means that we have different friends, a very weird music playlist, and really nonspecific taste.

Maybe, like me, you grew up with the idea that extroverts have it easier in many aspects. People tend to think that extroversion and happiness are synonyms, or that quiet and boredom go together. Even though this can be the case, it isn’t always. For example, to me, pizza and a movie, taking naps, and a good book mean happiness, but the following weekend, it could be partying and having some drinks. It just depends.

As I became interested in this, I also realized all the benefits from having a 50/50 personality. It is nice having an open door to both things, because it gets you closer to different personalities. It is also okay to fall out of the common standards set by society. I think being like this is a way of showing the world that things are not always black-or-white—we are a perfect example of gray. There are also studies that found that ambiverts might be better in sales, because not only can they be nice and open, but they can connect in an honest way with the customers.

While some need people and interaction, others need solitude and peace. And that’s okay—in fact, that’s great. 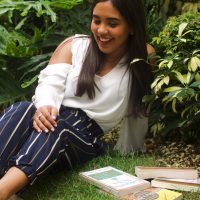 Carolina Peña Jiménez is a clinical psychologist and psychotherapist. She is constantly looking to deepen the connection within herself and others, enjoys being in constant… Read full bio