I struggle with getting rid of everything.

And like everything always does, it started when I was a child. I can remember keeping wrappers from Dubble Bubble gum in a giant glass jar. The yellow, red, and blue waxy papers were smashed to the lid. My kid logic was simple: there might be a mail-away offer someday, or a contest or something. What if there was some kind of a toy that I could get with all of those waxy two-inch paper squares?

Bazooka gum had mail-aways for stuff back then, so why wouldn’t Dubble Bubble? What if I missed out because I threw them away? A free T-shirt? A belt buckle? An action figure (just pay postage and handling)? That jar was either a see-through waste can of trash or a transparent chalice of undetermined dreams.

This was my angst—missing out on something. Something that I could have had if I hadn’t gotten rid of something else.

This (illogical) logic has followed me into my 40s. It’s the same story. Object X needs to go. It’s dull and dusty; it stinks a bit and is moldy and unusable. Probably useless. But before I touch it, the absurd sorcery begins. Object X suddenly sparkles with potential and possibility. There’s a pillowy cloud of opaque magic hiding untold bounty the moment I think to get rid of it. Ugh!

Recently I’ve had to deal with my clutter. My blinders fell off, and the light began to scorch my eyes. I had an unnecessary, underused sports car in my garage. A modified, stunning, one-of-a-kind Corvette. The previous owner had won “Best in Show” at the Corvette Museum in Kentucky (yes, there’s a Corvette Museum).

To me, it was a masterpiece. Custom everything to the highest caliber: paint, decals, headers (exhaust), air intake, wheels, seats, gearbox. It was just, wow! I had a favorite stretch of highway for when I drove it. It was a straight, downhill path with no shoulder; you could see for miles. It was where the cops couldn’t hide—a loud, lightning rod of euphoria. I would take it out late at night and plaster the back of my skull to the headrest.

This went on for the first few years. Then the newness wore off—a fade of interest. I didn’t like that I didn’t care anymore. But deep down I knew that the car was no more than a burden. It hardly ever met daylight. The only time it saw the road was for service. It became a giant shiny-yet-dust-covered obstacle in the garage. One that cost a small fortune to keep fully insured.

I lied to myself that I still loved it and was going to drive it. I didn’t.

I find it hardest to lie to myself in the morning. Somehow I can’t bullsh*t myself pre-coffee. And this car quickly became my early morning annoyance. I would wake up with it being the first thought in my soon-to-rise head. After six months, I couldn’t shove it to the back of my brain any longer.

I found myself in a peculiar state of reflection. My boyhood dream come true had become a giant fiberglass turd with racing stripes. After a few weeks at a Corvette dealer, it sold—to someone who I hope had the same feeling I’d had a few years back.

I felt like I did a good thing, but that’s debatable. I didn’t donate it to charity. I sold it. But it felt good that someone else was going to be as amazed as I had been.

My house still has too many examples like the Dubble Bubble wrappers. But selling my car was a huge first step, and I’ve continued the momentum.

Here are three simple steps I take regularly, and you can too, to help when you’re “clutterstuck.”

1. Be honest with yourself. Do you ever wake up bothered by something you own? Do you have your own “fiberglass turd”? Do you honestly still want it?
2. Donate to charity. Whenever anything new comes home with me, I donate three similar items to charity. If I can’t pass on a Billy Joel restrospective, three other CDs have to go to Goodwill.
3. eBay Sunday (or whatever day works for you). I have a weekly eBay ritual. I take a minimum of three items—comic books, action figures, old video game consoles—and sell them online. I keep a running tally of my earnings and then donate the money to charity every six months. It’s something to feel good about that’s not up for debate.

May we all make our way to having as little as makes us happy. 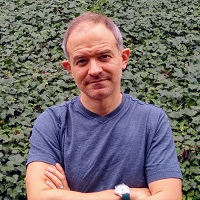