How Cannabis can improve our Health, Happiness—& even our Homes.

Let’s talk about cannabis and all the wonderful things it can do.

First, it’s important to know that hemp and marijuana are part of the cannabis family but are genetically distinct from one another.

They both produce CBD but the big difference between the two is marijuana produces THC, the compound that gives you that high feeling. CBD and THC are both cannabinoids, which are chemical compounds secreted by the cannabis flower. These cannabinoids provide relief to an array of symptoms, that I’ll go into further.

The cannabis plant produces a variety of cannabinoids, but it’s an extensive list, and many are still being discovered.

Cannabinoids work by imitating compounds our bodies naturally produce, called endocannabinoids, which maintain internal stability and health. This system is called the endocannabinoid system—basically, it helps mediate communication between cells.

When something is off with our bodies, that’s when we develop ailments; the endocannabinoid system, or ECS, helps keep our body in homeostasis. The ECS is not unique to humans, it exists in all kinds of animals; what’s fascinating is ECS receptors are present in all vertebrates, but not in insects. The ECS is so important to our overall health and wellness because it plays a crucial role in regulating some major biological functions.

Different cannabinoids have different effects depending on which receptors they bind to. For example, THC binds to receptors in the brain whereas CBD interacts with receptors located throughout the body. Depending on a product’s cannabinoid profile, different types of relief are achievable.

Different products and strains have been developed to deliver varying doses of different cannabinoids, which help alleviate various types of issues. So let’s get into the benefits of CBD, which is produced by hemp and marijuana. CBD helps a variety of problems, and the list is ever expanding with new research coming out.

Here are some of the most common conditions and symptoms that CBD is used for:

One condition that has spurred CBD into the spotlight is epilepsy and other seizure disorders. A famous documented case is about a little girl named Charlotte, whose story is told in the documentary, “Weed” by Sanjay Gupta.

Charlotte went from having 1,200 seizures a month to just three when she started consuming CBD. There are many other cases like Charlotte’s, where CBD has changed lives drastically.

CBD also helps with PTSD, anxiety, depression, Crohn’s disease, multiple sclerosis—and the list goes on. CBD has no lethal dose or known serious medical side effects, yet it is still federally illegal in some states. The idea of using cannabis for any condition remains a touchy subject, especially in a culture where the “Reefer Madness” propaganda instilled so much fear.

CBD is safe, nontoxic, and helpful for treating a variety of medical issues. So why is it illegal and classified as a “Schedule 1” drug? My hypothesis is CBD would cut into the pockets of pharmaceuticals, and we know how Big Pharma wouldn’t like that.

Now let’s get into THC a bit more:

THC is best known for its mind-altering euphoria, but it too has beneficial medical properties. There’s some overlap in what CBD and THC can treat, but THC is particularly effective in relieving nausea, appetite loss, insomnia, and pain. Research also shows THC can kill cancer cells, slow tumor growth, and relax tight muscles.

Many patients find that they need a 50/50 of CBD and THC, meaning they need an equal amount of CBD and THC in their medication. For example, I have a cranberry drink that is a one-to-one ratio of CBD and THC that I take throughout the day. This combination offers the best symptom relief, as the two work synergistically together.

I’m a huge proponent for cannabis in general for its versatility. Hemp can be used to build fire and mold resistant homes. Yes—you read that correctly. Hemp bricks are nearly fireproof. I watched a video of a hemp brick being burned by a blowtorch, and it had a charred, black hole no bigger than a silver dollar. Think about that: for almost 10 minutes of being burned by a blowtorch, it only had a hole the size of a silver dollar. I don’t know why we’re not building more homes with this stuff!

I also use hemp milk; it has more protein and healthy fatty acids, including omega-6 and omega-3, which are essential for your body. Interestingly, hemp milk provides protein that your body can easily digest. At my house, we also use hemp shredding for our chickens in their coop. It helps keep them warm and helps maintain the smell. Since it’s mold and mildew resistant, it holds up well to chicken pee.

Another reason why I’m an advocate is because I currently use marijuana to help relieve the pain caused by the tumors growing inside of my nerves. I’m so grateful I found marijuana for my pain. I was taking Percocet before I found marijuana, and that’s not the type of life I want. Opioids cause an array of issues and are not meant for long-term use. They are great for surgeries, and only meant to be used temporarily.

Research has found that opioids actually start to cause new pain and change the way our brain perceives pain, which in turn makes our tolerance to it nonexistent. Unfortunately, doctors have shoved these pills down chronic pain patients’ throats, and even some regular pain patients have been given these heavy drugs.

This has fueled a horrendous epidemic of addiction, thanks to doctors being swooned by pharmaceutical companies. Now, doctors are feeling pressure to cut back on prescriptions for opioids. So they’re cutting patients off, some without any real backup plan, and these patients are desperate—desperate for relief from the incessant pain. In doing so, people are turning to methadone clinics to help find some pain relief, and some are turning to heroin—and even suicide.

I know that desperate feeling for some sort of relief. To be in 24-7 pain changes you physically and mentally, and to not get relief can drive you insane. So, I understand the measures some take to stop the pain, even if it’s only for a moment. We are failing our patients drastically.

Cannabis can help people get off of opioids, and can become the substitute for their pain medications. But the only way we’re going to be able to change these outdated laws is by making our voices heard.

Write to your governor and senators about how crucial cannabis is, and how marijuana will help change our health care for the better. We owe it to our patients and ourselves to change these skewed laws about marijuana, and cannabis in general.

Please stand up for the ones who can’t, and raise your voice for a better future. 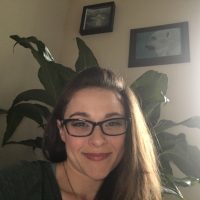 Hallie Thompson used to be a painter but life had other plans, now finding other creative outlets for her creative mind. She wants to share love and spread kindness, and belie… Read full bio