One summer day when I was 12, I donned my bikini and was shocked to see way too much pubic hair poking out the sides with horrifyingly unbridled freedom.

I grabbed a disposable razor and some soap and went at it.

Quickly, a million little screaming red raised sores popped up where my hair used to be! My slapdash scientific experiment proved to me that shaving a bikini line was clearly not effective: it hurt—and the results were ugly.

Obviously, this area of the body was not meant to be shaved. At least on me!

That was the first and last time I ever shaved my pubic region. I took to wearing swim shorts instead of traditional bottoms, and let my hair grow free, natural. I barely ever thought twice about it, except when I would see women in skimpy bathing suits without a single hair (or unsightly bump) showing.

How in the world did they do that? I assumed they must be getting some very high maintenance spa treatments to prevent those terrible bumps.

Fast-forward 35 years and I’m single, in my mid-40s, and online dating for the first time. I’m flirting with this guy and he wants to swap pictures. Fine…I’ve never done that, but hey why not? Eventually I send him a full frontal nude picture only to receive the response, “Well…now that’s a full bush!” I was taken aback by his comment. What other kinds of bushes were there? What were women doing to their pubic regions that would elicit such surprise at my natural hairstyle?

A few months later, I was flirting online with another man who begged me to shave for him. Ew. I was so turned off and downright offended by this stranger who had the gall to think he could impose his preferences on the most intimate part of my body.

Had pubic hair gone out of style? I put my sociologist’s cap on. I paid attention, investigating the situation wherever I could. At the hot springs, I noticed a woman who had gotten rid of most of her pubic hair, leaving a little diamond shape. It looked pretty—classy. I felt impressed and a little jealous. How did she manage that? At an AirBnb in Maui, I saw a woman in her 70s who had shaved completely. It scared me. Why would she do that?

I was upset. Why were women doing this? Shouldn’t we be standing together as sisters, holding the line to proudly keep our bodies in their natural, beautiful states? Shouldn’t we rebel against this pressure of heavy grooming that was clearly intended to please men? I was deeply disturbed by this situation.

And I got a little obsessed.

How many women were shaving their pubic hair? Did men expect this? Were men secretly disappointed when they encountered my “full bush”? Should I tell (warn!) potential lovers beforehand? What was normal these days?

To make matters worse, I had a few online connections with men who were beside themselves about the fact that I did have pubic hair—that was their kink! They wanted to know all about it. How much hair did I have? Just a little, or was it “a real bird’s nest down there?” These comments were just as disturbing as the ones that betrayed a predilection for hairlessness.

On a purely physical level, my own lady bits felt incredibly sensitive, I couldn’t imagine having a razor anywhere near them! Plus, I hadn’t forgotten the experience of those terrible bumps when I was younger. Maybe my skin (like me) was too sensitive and just couldn’t handle it.

I began doing some research, privately. How would I do it if I wanted to? I did a quick online search and was relieved to find a WikiHow page dedicated to the subject. They made it seem pretty easy. Get as much hair off with scissors and/or an electric razor. Then use a fresh razor, shaving along the grain of the hair.

For months and months, I thought way too much about the issue of whether or not to shave my pubic hair. I was scared. I was intrigued. Would I feel more attractive? What would it look like? Would my lovers experience more pleasure?

How long was I going to stress over this situation?

One day, I woke up feeling suddenly ready. I got the inspiration that I could just shave the whole top part without risking too much. I committed. I got the scissors out and followed the WikiHow steps. I bought new blades for my razor.

I went for it.

And…there were my labia! I hadn’t seen them since I was a little girl. I put on some silky underwear and walked around feeling like I had a very special secret, dropping my pants to inspect my fresh new self at every chance I got.

A few days after the first go, I shaved everything. It was kind of hard to get at all of the little hairs, and I was initially quite scared about the razor and my sensitive labia. I was sure they would get cut. But with time and practice, I have gotten more than comfortable with the ritual of shaving: I have even gotten a little obsessive about it.

Shaving this area is so intimate, so personal. I am now way more deeply acquainted, engaged, and in tune with this part of my body than ever before in my life.

Honestly, I can’t remember what kinds of vaginal sensations I used to have when I had my “full bush,” but I can tell you that now I have a very heightened awareness centered on this part of my body. I feel everything. I’m cruising through life in a relatively constant state of arousal—it’s my new normal.

The biggest ah-ha for me about this entire adventure, after all of the hemming and hawing over whether or not to do it and why, is that shaving ultimately wound up being for me. I had such an inner struggle about not doing it for men, not buying into the sexist peer pressure that says women should look like this and not like that. In all those years, I never once wondered what it might feel like to me, what it might awaken in me.

And I have to say, I have never enjoyed my special area as much as I do now. 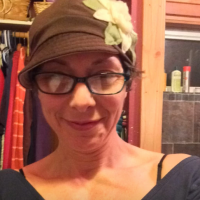 Amy is a Professional Potter, a Black Belt Nia Instructor, and a Processwork Therapist/Teacher/Coach. She is currently writing a self-help memoir about her dating experiences.… Read full bio

Furry is Fine: Your Daughter Does Not Need to Shave her Vagina. To Shave or Not to Shave. The Pornification of Pubic Hair.
See relevant Elephant Video