How my Solo Travel Dreams woke me up to Reality.

Teacher: “What would you like to be when you grow up?”

I had just learned this word. I believed it described my ambitions perfectly.

I was then informed that this is not a viable career option for an adult, and I was severely disappointed. That exchange has been on replay in my mind over the years, and will remain with me forever.

By the age of 27, once again, I found myself distracted by thoughts of traveling.

I was distraught with an insatiable thirst for adventure, newness, and getting out of what others refer to as the “comfort zone.” Maybe it’s my Bohemian roots or just an intense interest, either way I was at odds with my current circumstances as
they did not align with what I wanted to do with my life.

I wanted my life to have meaning—to have purpose.

I wanted to be useful and above all, perhaps, I wanted to live an interesting and noteworthy life.

Either because of these desires, or in spite of them, I was gluttonous with a craving to see the world. I wanted to see as much as possible, making my own well-informed decision about what it means to be alive and to live a good life; as Thoreau says “to live so sturdily and Spartan-like as to put to rout all that was not life.”

I was interested in the truth, and at that moment I felt whatever it was that everyone kept referring to as a “normal life” was simply a farce. That I, like many, had bought into it with my time and my resources, and had come out empty-handed and wanting.

I felt that the 12-year-old vagabond inside of me was more of a guiding light than a mere memory, a beacon of hope in the darkness of my adult life. She was still in there, this child, and she did not understand my dissatisfaction because she only saw adulthood as freedom.

Therefore, I could no longer find solace in the excuses and justifications for ignoring my deepest longings in life.

In an attempt to satisfy my nomadic desires and answer some very basic questions, I quit my decently paid management position at a bank, took a better paying job elsewhere, and began saving for travel.

And then, I met a boy at this new job and we began dating. He was aware of my travel plans and did not share in the enthusiasm, although he also did not try to deter me.

Three months from my professed departure date on said grand adventure, I had yet to actually buy a ticket. I had the money, just not the willpower.

I remained unconvinced of my abilities to go it alone, but more than that, I was afraid of disappointing myself.

What if I am not adequate? What if I hate it? What if I lose a limb or, worse, find myself a failure at the end?

As life goes, my boyfriend was fired the same day I intended to tell my new bosses that I was leaving them to travel abroad. This job meant everything to him and he was devastated. While consoling him, I found myself offering up the invitation to join me on my adventure. He accepted my invitation and I felt a sense of relief that I would not have to muster up all the courage to go alone.

For the moment, my travel doubts and preoccupations were quieted.

We planned to begin in Mexico City, descend through Central America for a few months, and then move on to South America. Turns out, James was not as keen as I had hoped. He preferred to travel more luxuriously than to stay in hostels as I had planned—as I had dreamed.

As we traveled through Guatemala, Nicaragua, and Costa Rica, we encountered moments of travel bliss on exotic beaches while watching the sunset, sipping on cheap beer, or in rain forests photographing the local wildlife. We dodged tourist traps and thieves disguised as friends.

We also began arguing regularly. Most of the arguments stemmed from a place of disconnect between our ambitions for the trip.

As a 12-year-old, I had dreamed of embarking on a grand adventure—despite that warning from my teacher—and for my one big dream, I had made many sacrifices along the way.

As the months passed, and with James not understanding my frustration, my dream versus our reality was not as I had hoped, or planned.

For him, this trip was something to do in lieu of sitting at home trying to find a new job. His way of reassuring me was with the statement, “you can go home any time you like,” but this did not make me feel any better.

I did not want to go home. I just wanted this experience to be different—to be better.

On the whole, I felt underwhelmed because I expected it to be life changing in a Hollywood movie, overly romanticized, Walden Pond kind of way.

Expectations were a major part of “dreaming up” my idyllic excursion. Over the years, I had so much time to think about the possible outcomes, the takeaways, the sights, and sounds.

I expected this trip to change my life—because I was upending my entire life to make it a reality.

It was in Panama City where James left me to go back to America—and I suddenly realized that I was alone. It took several days of wallowing and one kind stranger to pull me out of my funk.

A little while later, and before departing for an evening out in the city, I took a long look at myself and was surprised at what I found.

But I also saw a girl.

That girl, who once confidently declared her aspiration to be a free spirit, wandering from place to place without a home, because she knew that’s where she belonged.

I was struck by the thought that both of these versions helped me get to where I wanted to be. One version of me was a pragmatic, resolute adult—the other a carefree, limitless child. This discovery revealed that I had placed too much weight on my expectations.

As a 12-year-old, I assumed that I would live a remarkable existence as a homeless wanderer, and as an adult I had expected this journey across the world to save me.

It is because of these dual reflections that I decided let go of my preconceived notions for the rest of my trip (and for myself) and to continue on alone. To see what may become of it (and of me) if I no longer expected anything in particular.

After all, sometimes an interesting and noteworthy life story is produced by throwing out our expectations and simply enjoying the ride—in all of its glory and mess.

I flew to Europe and did not return to the States for another nine months.

My travel dreams are still there, but so are my travel and life realities. 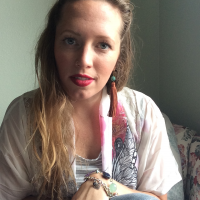 Danika Springob is interested in reducing negative environmental impacts, reading books, hiking, and drinking wine. She is a a self-professed free spirit with a collection of … Read full bio

6 Mindful Reasons to Travel Solo. Embracing the Healing Gifts of Solo Travel. What 100 Days of Traveling Alone will Teach Us. 6 Reasons why Solo Travel is the Best Experience we can Give Ourselves. Why every Woman should Travel Alone.