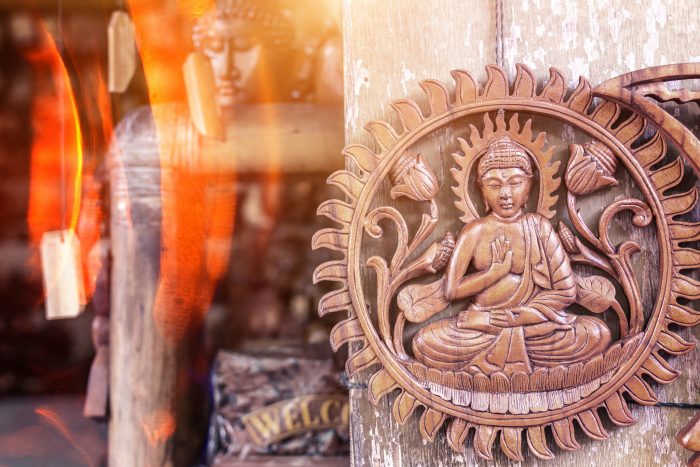 There’s much confusion these days about the term “maitri,” a Sanskrit term meaning “loving-kindness.”

You often hear people say things like, “I just want to stay home and hibernate, stressless, and not relate. I need a little maitri in my life.”

While there’s nothing wrong with just staying home sometimes, the idea of self-care is not necessarily the Buddhist view of maitri. Part of the confusion is due to two worthy streams—one, the Hindu tradition known as the Four Brahmaviharas, and the second, which grew out of that tradition, the Buddhist tradition of the Four Boundless or Limitless Ones.

Both traditions have exactly the same list of four virtues: maitri, compassion, sympathetic joy, and equanimity—but those virtues take on different meanings in practice.

“Brahmavihara” means the dwelling place of Brahma, so the idea of these four virtues in the Hindu tradition is to dwell in goodness and to be godlike, to be seen as good and like Brahma.

But the Four Limitless Ones of the buddhadharma are limitless because they involve no dwelling on self at all. They are based on an understanding and experience not only of impermanence, but of the emptiness and egolessness (lack of self-entity) of all phenomena, including oneself.

This understanding and experience comes from uniting mindfulness and awareness in meditation. To whatever degree one experiences egolessness, to that degree one can express genuine loving-kindness, genuine maitri, to everyone including toward oneself. But egolessness cuts through ego-fixation and self-cherishing, just as it cuts through grasping at or clinging to others.

So maitri actually makes one less self-centered. It’s not at all about my tree, or my this, or my that.

Maitri in the Buddhist tradition manifests as gentleness, kindness, and relaxation. Even insults only reveal or mirror the meditators tendency to defend the fiction of ego, and usually, if not immediately, trigger a sense of humour or at least some amusement and the ability to let go, rather than dwell. This is because the Four Limitless Ones are not bound by ego intention. There is less of a tendency to report back to central headquarters, and more of a tendency to open further.

So this is quite different from hibernation or the feeling that one needs to take time out to love oneself so often heard in ordinary parlance.

The current “take” on maitri resembles neither the original Hindu nor Buddhist view.

The Four Limitless Ones of the buddhadharma, and maitri in particular, encourage affection all the time. But love is not a business deal. Loving-kindness is beyond fascination and expectation.

We can be loving without expecting anything in return, simply by communicating warmth. This provides a softer, less harsh experience of ourselves and our world; and it’s a great way to develop long-term friendships with a variety of people.

Maitri is in fact the opposite of the throw-away society’s tendency toward throw-away relationships. Our lives actually become enriched with maitri, allowing us to be genuinely and often anonymously benevolent.

The Most Important Article on Elephant, Ever: Maitri. What you Want won’t make you Happy. Maitri will. {Editor’s Letter} Learning to Make Friends with Ourselves: Pema Chodron video on Maitri. Pema Chodron vs. Self-Help.
See relevant Elephant Video

How to Fall in Love.

How to Let Go of your Guilt Trips about Yourself.