When Someone’s Death feels like it’s Killing You, Too.

“Everything happens for a reason,” my friend said to me.

I don’t remember the context in which she said those words, but oh, how I hated hearing them. Anger welled up within me, and I remember thinking, “I hope you never have a life experience that makes you question that statement.”

For the past seven years, I have been wading through grief associated with my older sister’s tragic death.

To say it’s been difficult would be an understatement. This loss has made life harder in numerous ways. It’s affected my career, my physical and emotional health, and made it difficult to experience an overall sense of well-being in the world.

Yet what is plaguing me the most right now is this feeling like there is no grand purpose for my life.

If everything happens for a reason, shouldn’t this experience be directing me in some meaningful way? Shouldn’t I be able to generate something good out of it?

I find myself thinking things like, this won’t matter in the long run. Does anything really matter? It’s all temporary anyway. I wonder how so many people seem fulfilled by their lives, whether it be the career they’ve built or the families they are raising, when mine just feels like one big pile of sh*t.

To give you some frame of reference, this isn’t the first loss I have experienced.

My half-sister died by suicide when I was 10, and my father passed away from cancer two days before my 20th birthday.

These two losses were hard, and the grieving process lengthy, especially after losing my dad. But the death of my older sister was different. Or should I say, this loss changed me in ways that the others didn’t.

Not only did I lose my sister, but my faith has been experiencing a slow and painful death as well.

In the beginning, I clung to my faith to get me through the waves of grief. My faith gave me hope that one day this would get better. I thought, one day I’ll be stronger and wiser for what I have endured. But as I approach the seven-year anniversary of her death, that “one day” has yet to come.

I also started wondering if it was only the religious who believe everything happens for a reason.

My friend who had said this to me is strong in her faith, and it probably played a role in her remark. This belief system seems to give her the optimism and comfort I was lacking, and it made me sad I couldn’t feel the same way.

I was unaware this concept has a name, and it is referred to as teleological belief.

When I read up on the topic of teleological belief, I planned to see a clear delineation between people who believe in a higher power and those who do not, when it comes to believing things happen for a reason. As expected, I came across articles wherein some people claimed God is the reason for every major event in their lives, and others in which atheists expressed that nothing happens for a reason.

Then I came across one article stating a person’s religious belief does not determine whether one lives by those words. And this caught my attention.

“In one series of studies, recently published in the journal Cognition, we asked people to reflect on significant events from their own lives, such as graduations, the births of children, falling in love, the deaths of loved ones and serious illnesses. Unsurprisingly, a majority of religious believers said they thought that these events happened for a reason and that they had been purposefully designed (presumably by God). But many atheists did so as well, and a majority of atheists in a related study also said that they believed in fate — defined as the view that life events happen for a reason and that there is an underlying order to life that determines how events turn out.”

Regarding their study published at ScienceDirect, “Cognition,” they came to the following conclusion:

“Across all three studies, we found that while people who believe in God hold stronger teleological beliefs than those who do not, there is nonetheless evidence of teleological beliefs among non-believers, confirming that the perception of purpose in life events does not rely on theistic belief.”

Granted, I have experienced a situation where my sister’s death allowed me to be of benefit to someone else. This took place while working as a therapist. I will never forget the day I met with a new client and found out, she too, had lost a sister with whom she was very close.

She talked about her feelings of grief and survivor guilt, the impact it had on her relationships, and some health issues she encountered following this loss. Had I not experienced my own pain, I may not have been able to offer her the validation I did.

Since I no longer practice therapy, my life experiences feel as though they lack purpose. Additionally, I haven’t reached a point where I can see how I’ve grown as a result of this loss. I am struggling to find the purpose in my pain.

However, since suffering is a part of life, does that mean significant events must serve some larger purpose?

Or do we choose how we want it to shape and define us?

Now, when I look back on what my well-meaning friend said to me, I can see it from her perspective. I haven’t heard her question why things happen as they do, or if there is a God who hears and answers our prayers. And maybe, if I’m honest, I am slightly jealous she has found a way to stay optimistic, no matter what life throws in her direction.

Yet, the one thing I can hold on to is this: thoughts and feelings change, as do our beliefs. This has been my experience, as I have watched my perceptions shift and change based on life events, both good and bad.

So just because I am feeling this way today doesn’t mean I will feel this way five years from now.

And I find that to be a relief. 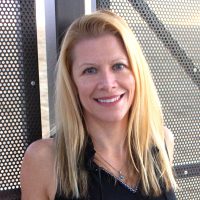 Danielle DeMaria is a former marriage and family therapist turned aspiring writer. She holds a Master’s degree in counseling psychology and is certified as a JRNI Life Coach… Read full bio