Though Notre Dame’s Flames were Put Out, another Fire Continues to Rage On.

As I saw the images of the flames, I grieved.

As I listened to the crowds sing hymns, my heart lodged in my throat. And as I watched the entire world wait for news of what might be saved, I waited as well.

As I waited, I thought. I thought a lot about how strange us humans are, myself included. We respond quickly, passionately, and collectively as we watch a beautiful old cathedral burn. We donate billions of dollars for its restoration. We talk about nearly nothing else for days. We feel as though a part of our souls is lost.

We grieve for those who will not get to see the cathedral in its pre-fire glory. We wait with bated breath to learn which incredible artifacts have been saved and feel the pull of history, our connection to generations prior and generations to come. We want to do anything we can to preserve this important site for our children and our children’s children.

As firefighters bravely combatted Notre Dame’s blaze, as the world watched, as donations poured in and social media buzzed, another fire continued to burn. It still does. It has been burning for a long time. Its blaze is—at this point in time—more difficult to detect. It doesn’t make for as splashy of images for the media’s consumption. But, mark my word, this particular fire grows in strength daily, and its ferocity could eventually mark the undoing of the human race.

The fire that is climate change threatens not just one incredibly valuable man-made landmark, but the entirety of human civilization. And the casualties along the way will be astronomical.

We are already losing species by the dozens daily, in what is now recognized to be the sixth mass extinction, in which scientists estimate that 30 to 50 percent of all species could be extinct by mid-century. Communities around the globe are being displaced by drought, sea-level rise, extreme weather events, and unrest connected to the climate crises.

And yet, us humans, particularly those of us living in conditions of privilege, myself included, are not coming together in communal alarm and grief. We are not gathering, driven by the same unspoken acknowledgment held by all who flooded into the streets of Paris.

A catastrophe of this magnitude can only be addressed collectively, whether by voices joined in song or protest or courageous acts of change.

We are not pierced with a sense of loss as we consider the animals and plants our children and our children’s children will never know. We are not paused in our daily life by the harsh reality that, without fast and large-scale action, the planet and all of us on it will spin over a tipping point, after which there is no return.

Or maybe we are. But all the evidence around me points to the contrary. Assuredly, there are brave leaders out there working daily to turn the ship around, through solutions, protest, political action, and by modeling a different way of life.

However, predominantly, we aren’t really acting—not enough, anyway. And I’m terrified. I felt grief, yes, as I watched Notre Dame burn. But Notre Dame will be rebuilt.

As I witness the blaze of climate change, I fear so deeply for the future of my children and their children. We will not be able to rebuild the earth. We didn’t build it in the first place, and we don’t own it. We are just one of the many irretrievable pieces of art on this vast, beautiful cathedral we call home.

We cannot rebuild the earth, but we can and must be the firefighters of climate change. Assuredly, this fire is much more complex than the blaze at Notre Dame. The solutions appear, at times, to be elusive. But we have the tools in the form of renewable energy sources, energy conservation, and resource management. We must hold large-scale corporations accountable as we shift from lives driven by greed to lives driven by respect for all living beings. We must channel foresight, scientific knowledge, and something far deeper—wisdom. We must be brave enough to start acting, immediately, before the blaze becomes as catastrophically visible as that in Paris, before the spire falls.

And we must grieve.

Grief, we learn, is threaded with love. We must grieve all that has already fallen victim to the blaze of climate change so that we can connect with our love for all that remains.

May that love spur us into action. May we join joyously as we creatively seek and enact solutions, as we abandon selfish greed and align our lives with this fundamental truth: we are all interconnected.

We need each other—from the fish to the flowers to the fungi to the humans.

May we act so that we do not end up standing in the streets together, struck with horror, as we watch a blaze we could have prevented. 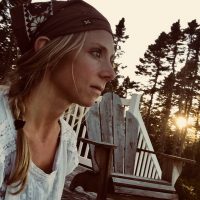 Johannah Blackman lives, explores, and writes in the woods and along the rocky shores of Maine. She is a mother, lover of the natural world, and climate activist. She is the f… Read full bio