How I found my own “Root Guru” & Why you Need one Too. 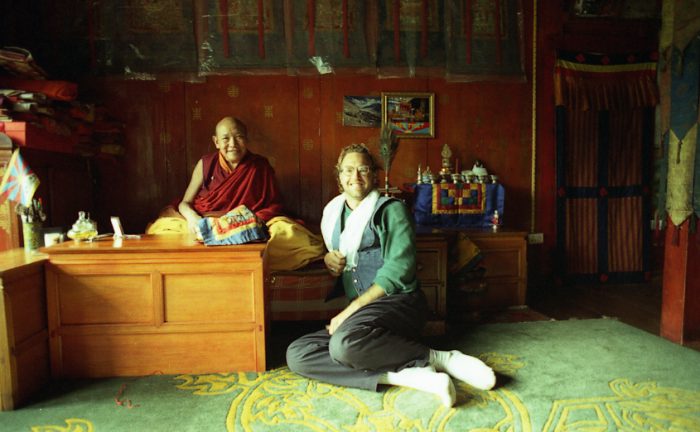 When “Eastern” dharma was new in Western countries about 60 years back, one of the points emphasized by qualified masters like Paramahansa Yogananda, author of the spiritual classic Autobiography of a Yogi, and, today, by the Tibetan Buddhists in exile, is the importance of a “root guru.”

Since after the Buddha’s enlightenment, scriptures have been emphasizing the importance of finding a “root guru.” But what is a root guru, and why is it important?

Such sayings as, “When the student is ready, the master appears,” have become so commonplace that they are rarely used anymore. But, within this little phrase is the key to understanding what a root guru is and why finding one is important. But, let’s back up a moment and define “guru.”

Guru is a Sanskrit word meaning “teacher,” which could mean a teacher of any subject. In India, it would not be uncommon to call one’s math instructor “guru” when greeting them, or any other “teacher.”

In the context of a dharma instructor, the term takes on the significance of one who has penetrated the meaning of profound philosophical texts and has acquired considerable meditation skill. Moreover, they have the meditative insight to transfer their wisdom to their disciples.

It was the idea of finding a guru that could transfer their wisdom to their disciples that appealed most to me, for who doesn’t like a shortcut?

We see many examples of gurus giving “initiations” in the West. These include such things as Tara empowerments, Avalokiteshvara empowerments, reading transmissions, Kalachakra initiations, and so forth. These transmissions, empowerments, and initiations can only be given by one who has himself penetrated the texts’ subtle meaning and experienced it. The Dalai Lama, for example, before he meets with the public for the Kalachakra “initiation” must visualize himself as the Kalachakra deity. I heard His Holiness the Dalai Lama state once, when I was receiving “Kalachakra” from him during a large, 10-day gathering in Washington, D.C., that it was only after four hours of meditation that morning that he was able to actualize himself as the deity. In other words, he lost awareness of himself as the Dalai Lama and believed for some time that he was Kalachakra. Only after entering such a state, he was able to initiate others into Kalachakra. We can only imagine the level of meditative absorption needed to “actualize” oneself as the chosen deity.

A qualified guru has the ability to awaken others only if they have awakened themselves and can do the aspirational prayers as outlined above. Thus, gurus are highly skilled.

Another example of why we would want to seek out a guru would be that it gives us the authority to pursue a particular text or dharma practice. A “reading transmission,” for example, is a public reading of a particular text that the reader has penetrated. It is believed that merely by hearing the words of a text read by an enlightened master is a permission for us to study those texts. It is of great benefit to receive this “permission,” because, although nothing is stopping us from studying a text on our own, without permission through listening, it would be an uphill battle to understand it.

I had met many gurus over the years, wishing to avoid an uphill battle, but it took years before I finally found a guru I felt was truly great. It is probably no coincidence that it was only a few weeks after that I found my “root guru,” with whom I stayed for 10 years and received full ordination as a “bhikkhu,” a Buddhist monastic.

A guru is a teacher on steroids. Today, we are fortunate to have many teachers with long lineages offering teachings, transmissions, and initiations, making access to the dharma more available than ever. Many of us who practice meditation have received blessings from a variety of masters who share their wisdom and experience so wholeheartedly. Since this is the case, it can be said we have many teachers—those who will support us along the way, and, if we are lucky, we will take one as our guru or root guru.

A root guru is also distinguished from the guru through the special connection we feel toward them. Yogananda, for example, received teachings from at least a dozen masters before he was chosen by Sri Yukteshvar, who became his root guru. Upon meeting Yukteshvar, Yogananda immediately knew his search was over, but it is not always so instantaneous.

For myself, it was instantaneous, after two years of wandering the Hawaiian jungles and receiving occasional instructions from visiting Indian yogis, and two years wandering the Himalaya of Nepal and the South Indian deserts, conditions molded themselves and the root guru appeared. It was an inescapable attraction that made it easy to give up my freedom and place myself under his thumb.

Before meeting my root guru, I spent one year near a renowned Tibetan master, Trulshik Rinpoche, in the Everest region of Nepal, and six months in a cave above the ashram of the Hindu master Sai Baba. I offered many prayers in my meditation to both masters that my root guru would appear. Although both these masters were renowned, I didn’t feel I could renounce my beloved freedom to stay with them.

Our root guru will be one whom we feel a commitment to that is far greater than any previous teacher. There is no personal sacrifice that will seem off-limits. Moreover, such a teacher will enable us to easily understand texts and meditation techniques that we hadn’t previously even felt approachable. It is a very special relationship between us, that a companion may not have. Our root guru will not necessarily have universal appeal, but we will definitely feel a causal connection with them, an irresistible attraction to them.

An irresistible attraction strong enough for me to give up my freedom and follow was to come only two weeks after my six-month stint in the South Indian desert cave. I had an ignoble departure from my cave when Indian police discovered I had no visa. I was ordered to New Delhi to work out my visa problems, which ended up with police escorting me to Delhi airport and placing me on a plane. I avoided jail because the immigration chief was a disciple of Sai Baba, in the ashram below my cave. Fortuitous, divine grace!

Knowing our root guru is analogous to knowing our mother. Although we may know many women, we don’t know any quite like our mom. It is the same with a root guru. Once he or she is in our life, the relationship we feel is set apart from any previous experience. When I arrived in Los Angeles, I stayed a few days with my father, during which time I flipped through a phone directory to find Buddhist centers. Finding none in Los Angeles, I left and went to San Francisco. After a futile stay in the San Francisco Zen Center, the director took me aside one day and said that there was a Manchurian Chan master in the Mission District who was so tough on his disciples that few could endure, but that he felt it was perhaps what I was looking for. He was right. I entered Gold Mountain and stayed 10 years.

The curious fact regarding finding my root guru is that when I entered the temple, I was informed that the master was on a lecture tour of South America and wouldn’t return for six months. Under normal circumstances, I never would have waited, but I unhesitatingly told the monks that I would wait. During my six-month wait, I never doubted I was in the right place, and never left the monastery except for a daily walk in the Mission. When the master finally returned, all my intuitions were confirmed, and I became a monk a few months later.

A root guru cannot be sought after; when the time comes, they will appear and we will know it. Until that time comes, we must call on qualified teachers whenever we can, and attend empowerments, and so forth. We increase the odds of meeting our root guru by our dedication to practicing meditation and receiving instructions.

There is no hurry, but we do want to be ripe for the good fortune of meeting our root guru and increasing the odds any way we can.

Richard Josephson lives at the City of Ten Thousand Buddhas, in Northern California, but his schooling was in Los Angeles and Santa Monica. He is 73 years old, has lived half … Read full bio