Much has been written and said about the recent college admissions scandal that has come to light. Parents, school administrators, faculty, and others have been indicted on racketeering charges relating to bribery and fraud to cheat the admissions process at highly competitive colleges.

In the discussions of the various factors that led to the scandal (socio-economic, administrative, interpersonal, etc), one important cause has been overlooked. All parents want their children to have access to a solid education as well as a social and professional network to ensure a good start to their adult lives. But how can otherwise intelligent individuals justify breaking legal and moral boundaries to achieve this?

We can answer this in terms of a particular parent-child dynamic: attachment.
The concept of attachment discussed here is not to be confused with attachment theory as developed by British psychoanalyst John Bowlby from his studies of children orphaned during World War II. There, attachment theory describes the dependency relationships that children form with caregivers (it was later extended to adult relationships). The attachment that a child experiences towards a caregiver may be healthy or unhealthy, adaptive or maladaptive.

The concept of attachment as described here comes from the Indian philosophical tradition, and refers to a significantly different phenomenon. Attachment is not restricted to human relationships, and is by definition maladaptive, disrupting individual well-being and negatively impacting relationships. A simple definition of attachment is described by the contemporary Indian philosopher A. Parthasarathy in his book The Holocaust of Attachment:

To love an individual or group means to be at one with them. Our mind resonates with their beautiful qualities and properties. We partake of that beauty and draw joy and selfless inspiration from it. When our love remains pure we are in harmony with them, and with our environment. This harmony is then reflected in our attitudes and behavior.

However, this love can become polluted with self-centered interest. Attachment develops as an immature dependency upon the relationship, and our primary consideration shifts to how events advance or hinder our own satisfaction. Although on the surface it may seem that the parents in the scandal are considering their children’s well-being, it is not difficult to see that they are in fact serving their own personal interest.

Consider a counterfactual: If the parents had not influenced the admission process, their children would not have been accepted to their respective schools. This consideration is untenable to the parents. Even the thought promotes an anxiety that they cannot bear. Hence, our guilty parents do what any attached parent would do, which is to assuage this feeling by avoiding that potential future.

A line spoken by Vanessa Redgrave’s character in the limited-episode TV series Jack and the Beanstalk – The Real Story (2001) is instructive here. She admits that she encouraged her son Jack to commit the crimes of theft and murder and then reveals her motivation, a truth that all parents can identify with. “My crime, perhaps the greatest of them all. A mother’s love. That terrible, overwhelming desire: to be proud of one’s sons.”

Effects of Attachment
Attachment is the death-knell for the emotional freedom and self-sufficiency that any mature human naturally craves. The negative effects of attachment include:

Anxiety. Changes in external conditions have the power to upset our emotional balance. The stronger the attachment, the less we are able to accommodate changes that impinge upon it. We thus develop an immature, unstable relationship with the object of attachment, and the world around.

Confusion. Attachment is a preferential emotional relationship, which constitutes an implicit bias. It distorts thinking and reasoning, skewing it to cater to this relationship, irrespective of whether or not the ‘conclusions’ drawn serve logic & reason. Attachment reduces our capacity to think and reason.

Isolation. We are dismissive or antagonistic towards those who do not cater to our attachment demands, or who (ostensibly) threaten to impinge upon the attachment relationship. Ironically, this can include the very person to whom we are attached.

Manipulation. We place unreasonable demands upon the object of our attachment in an attempt to ensure continued ‘supply’ of what we want. We attempt to manipulate or restrict the person who has been providing what our mind demands.

Self-deception. We become unable or unwilling to consider consequences as our thinking is confined only to the narrow focus of satisfying the attachment’s demands. Attachment thus promotes a tendency for self-deception and reduced inner consistency. This creates anxiety and cognitive dissonance as our actions oppose what we otherwise know as appropriate behavior.

How Attachment Arises
Attachment is a natural phenomenon of the human mind. Just as an unsupervised child may find her way into harmful activities, an unsupervised mind will develop attachment to whatever it enjoys. The Indian philosophical poem Bhagavad Gita described this phenomenon over two millennia ago: “A man musing on objects develops attachment for them.” (Chapter 2, verse 62). The notion of musing here implies no conscious direction of the mind’s attention, and no consideration of the potential consequences.

The subsequent verse highlights the bias that attachment creates, describing a “confusion of memory.” We lose sight of our otherwise clear vision of right and wrong. We forget our role in society, and justify immoral actions to satisfy the mind’s demands.

Attachment arises due to repeated, indiscriminate musing. Once a particular enjoyment is experienced, the mind will naturally return to that field over and again. This habit creates the dependency without us knowing what is happening. This is especially true in the case of parental attachment. Our attachment to our children is not perceived by us as such – to us it feels like natural affection. This is perhaps the most frightening part of attachment, its insidious nature, hiding in plain sight.

Guilty But Innocent
The young child is not condemned for her harmful behavior because we understand that she lacks knowledge. However, that does not mean that she escapes consequences. If she takes a neighbor’s pretty necklace from their home, we deploy the appropriate punishment to bring her understanding and behavior in line, not as an act of revenge. We make this correction without the slightest hint of aggression or inner conflict.

So too, the knowledge of attachment is scarcely known in our society. When we have not been educated on something, how can we be expected to know it? Thus we are innocent in our ignorance. But this does not absolve us of our responsibility to account for the harm that we have caused, and the community obligations that we have violated.

Once we are acquainted with the nature of attachment, it becomes our obligation to avoid it. This is done by strengthening and applying our faculty of discrimination, the intellect. Intellect is not merely our ability for conceptual understanding. An intellectual person is not one who is learned or scholarly. Intellect encompasses our ability to transcend personal, egocentric interests, and to choose actions that elevate us morally and psychologically. It is the intellect that holds our capacity for effective self-reflection and emotion regulation. Thus it is every person’s obligation to develop it through philosophical inquiry, and to apply it to our own mind.

It is easy to point at the wealthy elite and condemn their behavior, but few (if any) parents are free from this trait. The main difference lies in each one’s ability to influence outcomes. Our own attachment will express in a variety of ways that are counterproductive to well-being, and which violate our own moral codes. The admissions scandal should serve as a wake-up call to introspect and investigate our own relationships. 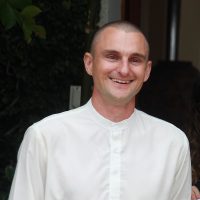 Glen Callahan: Student, practitioner, and teacher of Vedanta philosophy for over a decade. Glen is originally from New Zealand, and now resides in LA as co-founder of the non… Read full bio