A 4 Minute Conversation on Life and Death in a Lyft 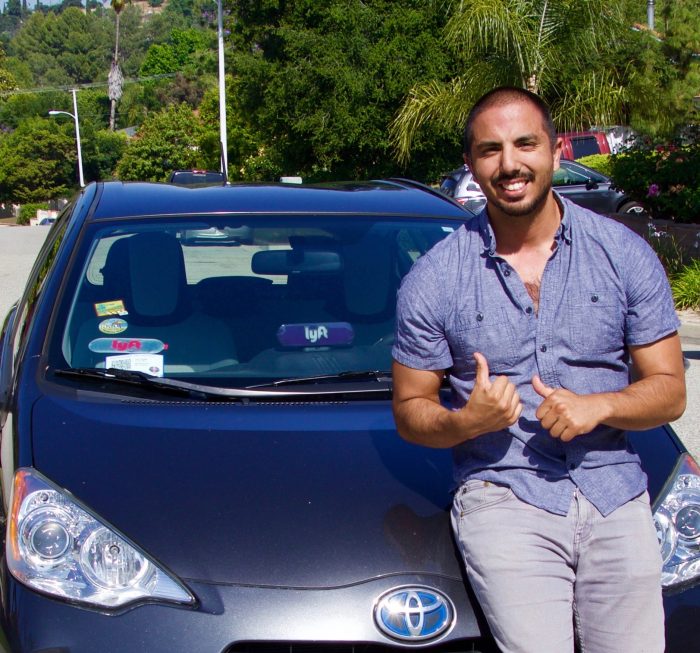 The countdown began. A few seconds to decide if I would like to accept a scheduled ride for Lyft, while driving down the 110 South Freeway. I hit accept.

In the hustle of filmmaking, and working to pay back loans I took for my new film, ¡Viva la Revolución!, I began driving for Lyft. Little did I know this accept would alter my perspective on the way I lead my life.

My second fare of the morning, a wealthy woman in an upscale part of Pasadena, frustrated as hell by something that caused her to take a ride with me. The tension in her voice, her pointed directions at every turn, and her stern tone, could not overcome the coffee induced “functioning” coma, that so many put themselves into to start their morning. I felt empathy for her. The disappointment in her eyes was palpable, and every time our eyes connected in the mirror, there was a sadness that had more to do than just this single inconvenience that placed her as the backseat captain, in an attempt to seize some sort of power in her day. I was not upset with her. Instead, in my relentless desire to help people feel good about themselves, I wanted to make this woman feel better in some capacity, to snap her out of this funk, and leave her on her way to having a different outlook on the day ahead.

I looked at the ETA of four minutes and my heart began to race as I contemplated ways to be there for her. She was tense, stressed, willing herself past her worries with each sip of a cappuccino, in order to put on a strong exterior for her assuredly difficult high-level job. “Should I ask her what was going on? Should I just do the ‘Tony thing’ and throw her for a complete loop with singing or a few dad jokes told with extreme confidence?” Maybe I should just listen to her vent(i)…admit it, you reread that and laughed.

None of this seemed right. Four minutes. How could I change this woman’s outlook in four minutes? Honestly, I succumbed to her tension and I chicken shitted out and wished her a great day ahead with a smile, as she half-heartedly listened and shut the door, perhaps intentionally, in my face.

As I drove on, I asked, “Did I do enough? Did I do what I am capable of? Is 4 minutes really enough to change a life?”

Then the alert came, snapping me out of the meditative state I often times enter while bopping and weaving through the Battle Royale, lovingly referred to as L.A. freeways — a scheduled pick up for a guy named Dave, no picture to his name on the corner of a busy intersection.

I saw a man, holding a somewhat empty grocery bag with a couple of beanies atop his head, and a big well-worn jacket to keep him warm in this unseasonably cold L.A. “winter” walking back and forth. Presuming him to be homeless, I drove past him. I circled once more and decided to stop almost right at the corner. The same man knocked on my window and asked if I was Tony. A bit flustered by my own misperception, I said yes, and let him in.

A soothing peace overcame the car as he entered. He greeted me with a very kind hello; something about it didn’t feel like mindless exchange of pleasantries between strangers. I looked at the distance and ETA on my clock and it said 1.5 miles and 7 minutes, about the same time in total I had with the coffee propelled businesswoman.

The ride started out like any other. I like to listen more than I talk, to see where the passenger is at mentally and see what kind of experience I should mold it to be.

There was a loneliness to Dave. Perhaps not loneliness, but reflection. He’d entered his meditative state, acutely aware that he would break it shortly, as he contemplated what he should share with me. Intuitively, I could feel that he didn’t have many people to connect with, so I wanted to lend my ear a little more than normal. He asked me about my day, if it was going to be a busy one, and I said, I wasn’t sure yet, as my producing partner was sick, and we had a marathon strategy session planned. I asked him the same, expecting the same mundanity that I provided.

“Yes, and hopefully, the doctor will tell me, ‘See you in 30 days.’ That’s always good news.” Stunned, saddened, curious, afraid of the truth I already knew, I asked, “Is it good that we see a doctor every 30 days?” Dave responded with complete ease, “Well, in my case, that means I have 30 more days to live.”

Dave told me that he had a terminal illness and that doctors had caught it far too late. For every brief lapse in conversation, he looked out the window with a smile on his face, taking in every humdrum building that passed us by. Peace.

I decided to take a leap, “How has your perspective shifted knowing that you may not have that much time left?” He responded in kind, “Well, once you get over the depression, it’s just appreciation. There’s a want to experience life more.” I pressed on, absolutely fascinated and perhaps, not being respectful of boundaries, “How have you decided to experience life more?” “Well, I just appreciate everything. Even when I’m in pain, I can just be thankful that I’m still here. Able to live.”

It’s a way of describing terminal illness, that perhaps some of us have heard before, but when you’re with someone going through it, it takes on a whole new meaning. Words really can’t describe what that feeling is. I looked at Dave in the rear-view mirror, our eyes connected, I told him, “You have an incredible spirit. As soon as you entered, I could feel it. I want to let you know that in this brief moment, you have made my life better.” He slightly hid his smile, knowing this was true and responded to me, “I may be a poor man, but I’m rich in spirit. You’re a good man, Tony. I can just tell. I cannot tell you what you have done for me. You’ve changed my life for the better just by being you.”

I was thrown for a loop, not knowing how to process this. And truthfully, setting aside what it all meant, to enjoy the serendipity of this Lyft ride, as our words faded into the noise of traffic passing by. Our conversation continued, he told me about his upbringing. His father and his sister, had just recently died, and he had been making more trips back to his native North Carolina to spend time with his family. I misspoke about death, saying “some of us die quicker than expected.” Dave laughed and said, “Come on man, don’t say that…but you’re right.” I apologized profusely but we couldn’t help but laugh together at the insensitivity of my statement. We knew in that moment, life was too short not to.

As we pulled up to his home, he kept repeating, “I wish I had known you earlier.” I repeated the same sentiment. As the car came to a halt, I turned around and almost instantaneously, we clasped each other’s hands in a sign of solidarity of our shared humanity.

I believe there are times in our lives we are able to see someone’s soul when we look into their eyes and connect deeply enough. For two strangers that became lifelong friends in the span of a ride, this was one of those. I held back tears, having had the opportunity to get to know him, knowing that my life was forever changed. I gave Dave my card, and said that if he ever needed to chat or just needed a friend during the tough times, I’d be there.

I can’t provide closure to you or give you a gift-wrapped Hollywood ending and say that this story ends happily. I knew then that I may never hear from Dave again, not because of his illness, but perhaps, that interaction was all that God and the universe had intended for us. We exchanged one more smile of gratitude toward one another as he closed the door. He went up the stairs to his apartment, and I slowly pressed on the gas pedal, in search of my next passenger.