After Loss, we need our Memorial Days—the Public & the Private Ones.

Reflections on life after loss, after Memorial Day.

I’ve always been a little unsure of my place in relation to patriotic holidays, but I once felt a strong sense of connection at the sight of some veterans in a Memorial Day parade.

I think they were marching, though my memory has no rhythm in it.

I’m not good at guessing age, but it’s safe to say they were closer to the end of their lives than the beginning. I suddenly felt joined with whatever they’d been through, because they’d carried it with them for so many years. The parade gave public space to things I imagine they remembered daily.

I felt a kinship with those old soldiers because of my own losses that I thought would stay with me the same way, for life. At that time, mine were three pregnancies, all in the first trimester, but two of those hearts had started beating before leaving me. The veterans had lost friends they’d never see again.

In an instant, the distance between their lives and mine closed considerably. I was part of an invisible parade of women who’d been through what I had, and simultaneously connected, in a way I couldn’t explain, to veterans of a different war.

If there’s a heaven, I hope it’s a place where all of our parades come together and finally make sense. Some of mine have begun to. I now have a son who showed up defiantly, in spite of the three to five percent chance of his existence that the fertility clinic had predicted.

I wasn’t thinking about any of that this Memorial Day, as I sat in a wooden seat, surrounded by family and strangers at a glorious outdoor amphitheater, ready to enjoy a free concert performed by “The President’s Own” United States Marine Band. Fireworks followed.

The forecast had been for thunder and rain that never actually came. Those of us who showed up were either a lot more patriotic or just less arrested by the chance of storms.

I wonder how many were like me and Mister Magoo, oblivious to dangers we narrowly escape, unaware of any sense of threat.

Thank God for the soldiers who keep people like us safe.

As the music began, I wriggled a bit, trying to sit comfortably, accommodating my sore hip, hands settling on my stomach, still slightly stressed from the day. I removed my shoes too, to loosen some tension and heat, which releases through feet, doesn’t it? No one noticed but my daughter. She’d been my innocent pregnancy, before miscarriages existed to me at all. In her typical teenage concern about standing out, she asked an obvious question, with a trace of disdain. Did you take off your shoes? I simply said yes, quietly not liking her efforts to correct me, but enjoying the freedom from responsibility during the concert.

As much as I longed for motherhood, it’s more like soldiering than I knew it would be, and I often question my qualifications.

Taking in the musicians and their music, I noticed how at ease they seemed to be on that stage, which had to be a lot hotter than my spot. I was struck especially by their comfort with discipline and structure, by the crisp specificity of how they carried themselves, and their instruments, which carried the music to us.

I felt different, not-like-them, as I took in their uniformity, their starched white pants and skirts, their matching red jackets, lined proudly with vertical buttons and horizontal cords, epaulets adorning their shoulders. I couldn’t pull that off, I thought. Wearing those, I’d feel more like one of Cinderella’s coachmen, after midnight, a mouse outgrown by its clothes.

I watched the confidence of the conductor, at first with a similar sense of being unlike-him. His hands were hypnotic, flowing like water, perfectly on purpose with the tempo, swirling like eddies through intricate melodies, cresting with crescendos. Sometimes they were like fire, sparks flying from his fingertips, ignited with inspiration. The microphones before him, I noticed, fanned outward, the inverse of how reporters would point their attention toward a celebrity. Their position said without words, “It’s not about me,” hinting of humility in concert with his confidence.

I could feel my strained relationship with authority shifting as I watched. He was like a fiercely attuned parent, and I a grinchy child whose heart grew two sizes that day. His outstretched arms said to quiet down, but sometimes to shout, and even shout louder. He was strict yet benevolent, helping them regulate their emotions and energy.

It seemed like hard work yet such fun for him, skilled at his craft, his grown children skilled at their own. Hop. Skip. Jump. Higher. Run! Instead of no, No, NO, his hands said yes, Yes, YES. Look what you’ve done! His whole stature conveyed pride and joy in the music they made together. They were breathing in rhythm between the notes, engaged in that zone where work and play and rest intersect.

As a mother of two, now, I wondered about musicians’ relationships with each other. My heart sank momentarily, as I noticed their eyes laser focused on the pages before them, no connection. I felt like Emily in “Our Town,” allowed to relive just one day after her death, lamenting “We don’t have time to look at one another.”

Soon, I was distracted from my sadness about the lack of eye contact, as an enormous American flag unfurled behind them, like a banner connecting the intensity of their efforts. Emotion swelled with the music, creating a palpable feeling of being a part of something bigger.

The energy extended beyond the concentric semi circles of musicians, through the conductor, to the audience, affecting me. I gazed at the stars, the ones beside the stripes on the stage, thinking about the meteors I used to watch for as a child, and listened to the medley honoring each of the armed forces.

As they played for those who paid the ultimate sacrifice, I thought about what happens when a star dies. It collapses and sends energy out into the universe, I think, like a heavenly version of the earthly process when a body enriches the earth.

I thought of my friend whose death had that effect on me. I’d slipped into her job for the next three years, working out of that office I thought of as hers. I couldn’t make up for her absence, but I could contribute with my whole heart and best effort. Anything less would have been a disservice.

Wouldn’t it be wonderful if all losses led to rebirth? I bet they can, but I forget too, in the emptiness that follows. There’s no universal recipe, but I have some ideas born of those years I spent focused on fertility. Permission to grieve, to feel all the feelings, makes space for creation to find a new form. Striving for purpose, for being of service, can help, but a lot of it’s not up to me.

Moving forward is like a mix between active effort and midwifery. Of this I’m certain: we need our memorial days, the public and private ones alike, to find that alchemy. 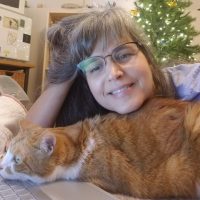 Kathryn Kurdt, PhD, has been a counselor for many years in a variety of settings. She currently practices out of her home in south central Pennsylvania. She’s a recovering… Read full bio